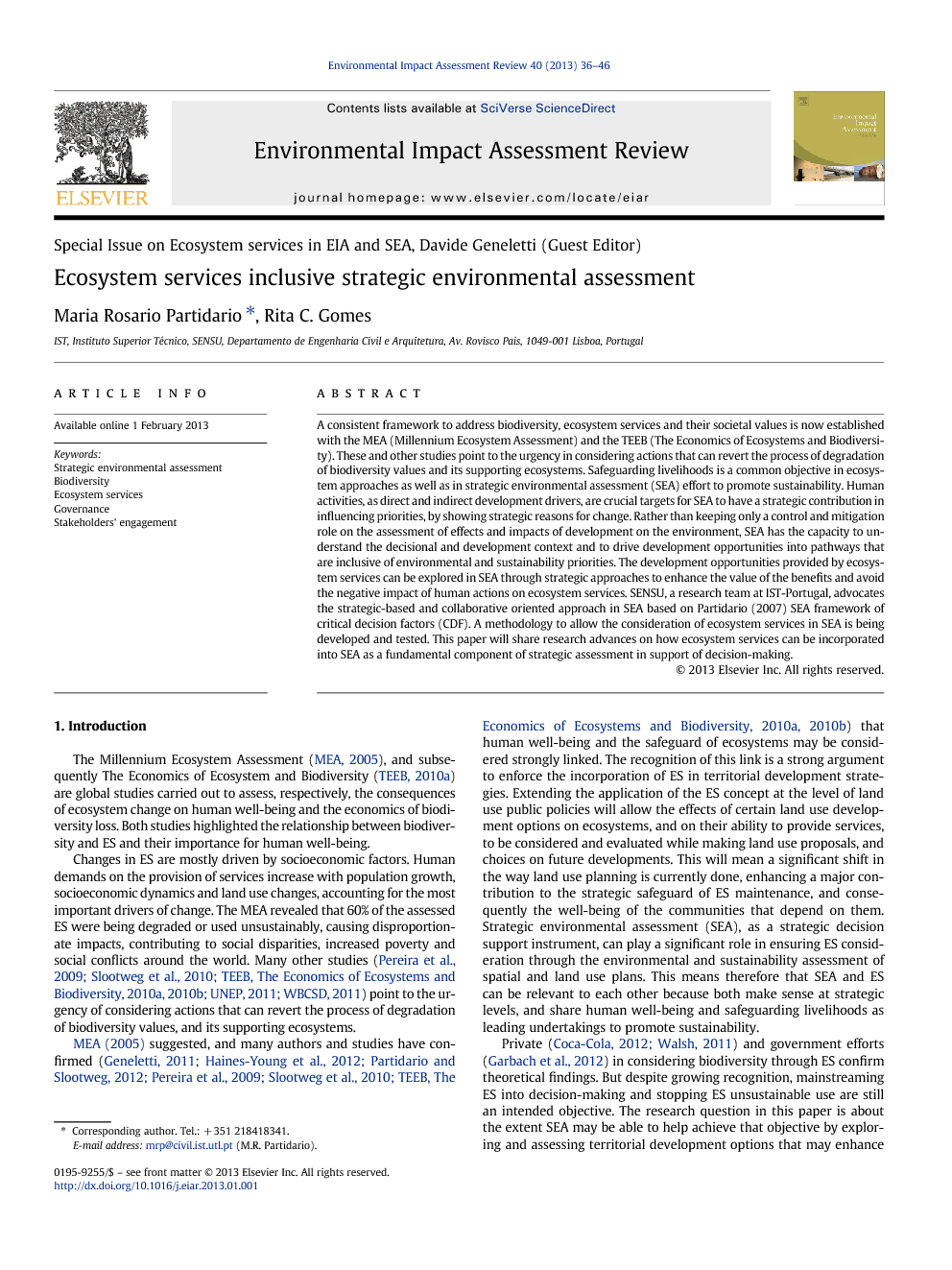 A consistent framework to address biodiversity, ecosystem services and their societal values is now established with the MEA (Millennium Ecosystem Assessment) and the TEEB (The Economics of Ecosystems and Biodiversity). These and other studies point to the urgency in considering actions that can revert the process of degradation of biodiversity values and its supporting ecosystems. Safeguarding livelihoods is a common objective in ecosystem approaches as well as in strategic environmental assessment (SEA) effort to promote sustainability. Human activities, as direct and indirect development drivers, are crucial targets for SEA to have a strategic contribution in influencing priorities, by showing strategic reasons for change. Rather than keeping only a control and mitigation role on the assessment of effects and impacts of development on the environment, SEA has the capacity to understand the decisional and development context and to drive development opportunities into pathways that are inclusive of environmental and sustainability priorities. The development opportunities provided by ecosystem services can be explored in SEA through strategic approaches to enhance the value of the benefits and avoid the negative impact of human actions on ecosystem services. SENSU, a research team at IST-Portugal, advocates the strategic-based and collaborative oriented approach in SEA based on Partidario (2007) SEA framework of critical decision factors (CDF). A methodology to allow the consideration of ecosystem services in SEA is being developed and tested. This paper will share research advances on how ecosystem services can be incorporated into SEA as a fundamental component of strategic assessment in support of decision-making.

The Millennium Ecosystem Assessment (MEA, 2005), and subsequently The Economics of Ecosystem and Biodiversity (TEEB, 2010a) are global studies carried out to assess, respectively, the consequences of ecosystem change on human well-being and the economics of biodiversity loss. Both studies highlighted the relationship between biodiversity and ES and their importance for human well-being. Changes in ES are mostly driven by socioeconomic factors. Human demands on the provision of services increase with population growth, socioeconomic dynamics and land use changes, accounting for the most important drivers of change. The MEA revealed that 60% of the assessed ES were being degraded or used unsustainably, causing disproportionate impacts, contributing to social disparities, increased poverty and social conflicts around the world. Many other studies (Pereira et al., 2009, Slootweg et al., 2010, TEEB (The Economics of Ecosystems and Biodiversity), 2010a, TEEB (The Economics of Ecosystems and Biodiversity), 2010b, UNEP (United Nations Environment Programme), 2011 and WBCSD (World Business Council for Sustainable Development), 2011) point to the urgency of considering actions that can revert the process of degradation of biodiversity values, and its supporting ecosystems. MEA (2005) suggested, and many authors and studies have confirmed (Geneletti, 2011, Haines-Young et al., 2012, Partidario and Slootweg, 2012, Pereira et al., 2009, Slootweg et al., 2010, TEEB (The Economics of Ecosystems and Biodiversity), 2010a and TEEB (The Economics of Ecosystems and Biodiversity), 2010b) that human well-being and the safeguard of ecosystems may be considered strongly linked. The recognition of this link is a strong argument to enforce the incorporation of ES in territorial development strategies. Extending the application of the ES concept at the level of land use public policies will allow the effects of certain land use development options on ecosystems, and on their ability to provide services, to be considered and evaluated while making land use proposals, and choices on future developments. This will mean a significant shift in the way land use planning is currently done, enhancing a major contribution to the strategic safeguard of ES maintenance, and consequently the well-being of the communities that depend on them. Strategic environmental assessment (SEA), as a strategic decision support instrument, can play a significant role in ensuring ES consideration through the environmental and sustainability assessment of spatial and land use plans. This means therefore that SEA and ES can be relevant to each other because both make sense at strategic levels, and share human well-being and safeguarding livelihoods as leading undertakings to promote sustainability. Private (Coca-Cola Company, 2012 and Walsh, 2011) and government efforts (Garbach et al., 2012) in considering biodiversity through ES confirm theoretical findings. But despite growing recognition, mainstreaming ES into decision-making and stopping ES unsustainable use are still an intended objective. The research question in this paper is about the extent SEA may be able to help achieve that objective by exploring and assessing territorial development options that may enhance the safeguard of ecosystems, and consequently their capacity to provide services. This opens an important opportunity for SEA in strategic decision-making, considering the role that SEA increasingly plays in territorial planning at different geographical scales. The aim of this paper is to explore the role that SEA can play in placing ES in the decision-making agenda, and to discuss the relevance and possible approaches to integrate ES in SEA, by positioning biodiversity, and the services provided by ecosystem services, as a key factor in decision-making. For that purpose this paper advances a methodology for considering ES in SEA in an integrated way, after presenting arguments on why strategic approaches in SEA offer a greater potential than conventional environmental impact assessment (EIA) based SEA. The relationship between SEA and ES is explored before a methodological proposal for ES inclusive SEA is presented. This methodology is being tested in several contexts in Portugal. Results of a preliminary application of this methodology to the Alcochete Municipality will be presented to illustrate some of the steps and possible outcomes.

There are strong arguments in the literature that support the need to consider ES in strategic decision-making. Concepts on ES have been developed for over a decade, and are getting consolidated not only particularly with the MEA (2005) and the TEEB (The Economics of Ecosystems and Biodiversity) (2010a), but also of course with an increasing body of specialized literature, including empirical applications. Guidance for SEA and ES is available since 2006 and several examples of application start being available. Integrating ES in SEA is nevertheless in its infancy but has a strong potential to materialize strategic opportunities and risks, and increase the tangibility of SEA. This paper has made some contribution to the theoretical and empirical debate concerning ES and SEA. The aim was to explore the role that SEA can play in placing ES in the decision-making agenda, how to ensure the services provided by ecosystem services can be considered as a key factor in decision-making, and how this can be achieved methodologically. The paper suggested that a more consolidated methodological framework is necessary, to help show the case for ES inclusive SEA. It proposed a framework concept for the integration of ES on strategy development, arguing for the role of governance in promoting adequate planning and management of drivers of change to enable ES contribution to human well-being. It also underlined that ES and SEA are relevant to each other in that they can both be used strategically, while sharing the safeguarding of livelihoods as a common objective. The paper further argued that strategic based approaches to SEA are likely to enable more flexibility to deal with complex problems more adequately, such as those involved in perceptions and valuation of ES by different stakeholders. It has also advanced a new methodology for ES inclusive SEA arguing that more than information and indicators what we need is to have ES making part of the assessment framework and negotiated by stakeholders. The case of Alcochete municipality is still in an early stage but served to illustrate how the initial analysis of ES can be developed as part of a SEA. Difficulties encountered so far relate to the insufficient practice with these kinds of approaches, the valuation methods available, as well as some resistance of the nature conservation authorities to accept the ES concept, as if ES were a threat to ecosystem conservation. The point made in the Alcochete case is that both the local authority and some economic and social stakeholders reveal a very positive perception on the potential of this approach to help land management and investment decisions. Stakeholders learn about benefits associated to ecosystems and find a reason for their conservation and enhancement. This gives stakeholders some ownership over natural resources in their ecosystem context, and an interest for its conservation. Knowing that multiple stakeholders have an interest is a good motivation for local authorities to also wish to maintain, and enhance ecosystems. It will also stimulate the use of SEA as a strategic instrument to help management and negotiation through appropriate governance, when there is a value chain to stakeholders pinpointed by the valuation of ecosystem services.