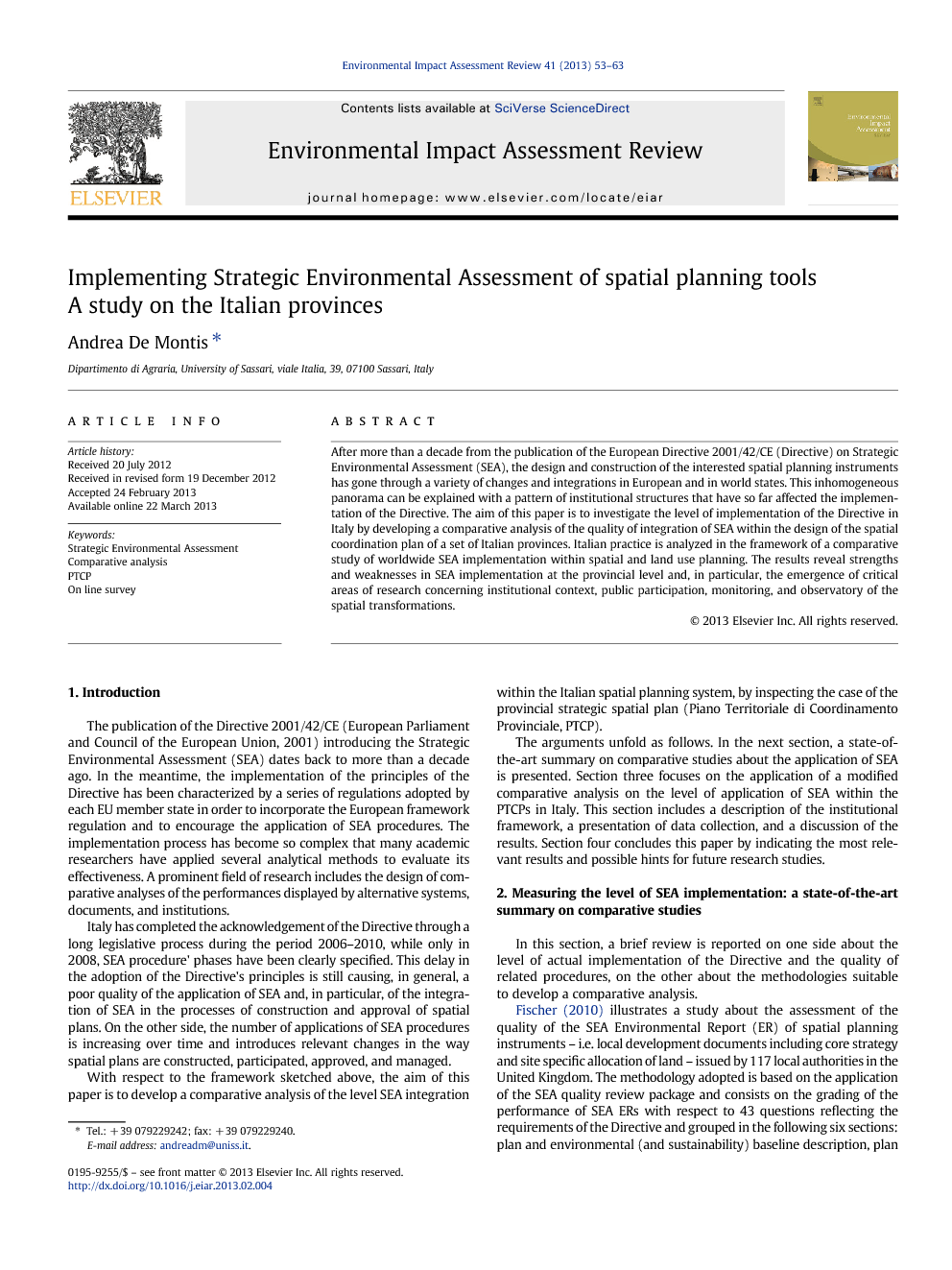 After more than a decade from the publication of the European Directive 2001/42/CE (Directive) on Strategic Environmental Assessment (SEA), the design and construction of the interested spatial planning instruments has gone through a variety of changes and integrations in European and in world states. This inhomogeneous panorama can be explained with a pattern of institutional structures that have so far affected the implementation of the Directive. The aim of this paper is to investigate the level of implementation of the Directive in Italy by developing a comparative analysis of the quality of integration of SEA within the design of the spatial coordination plan of a set of Italian provinces. Italian practice is analyzed in the framework of a comparative study of worldwide SEA implementation within spatial and land use planning. The results reveal strengths and weaknesses in SEA implementation at the provincial level and, in particular, the emergence of critical areas of research concerning institutional context, public participation, monitoring, and observatory of the spatial transformations.

The publication of the Directive 2001/42/CE (European Parliament and Council of the European Union, 2001) introducing the Strategic Environmental Assessment (SEA) dates back to more than a decade ago. In the meantime, the implementation of the principles of the Directive has been characterized by a series of regulations adopted by each EU member state in order to incorporate the European framework regulation and to encourage the application of SEA procedures. The implementation process has become so complex that many academic researchers have applied several analytical methods to evaluate its effectiveness. A prominent field of research includes the design of comparative analyses of the performances displayed by alternative systems, documents, and institutions. Italy has completed the acknowledgement of the Directive through a long legislative process during the period 2006–2010, while only in 2008, SEA procedure' phases have been clearly specified. This delay in the adoption of the Directive's principles is still causing, in general, a poor quality of the application of SEA and, in particular, of the integration of SEA in the processes of construction and approval of spatial plans. On the other side, the number of applications of SEA procedures is increasing over time and introduces relevant changes in the way spatial plans are constructed, participated, approved, and managed. With respect to the framework sketched above, the aim of this paper is to develop a comparative analysis of the level SEA integration within the Italian spatial planning system, by inspecting the case of the provincial strategic spatial plan (Piano Territoriale di Coordinamento Provinciale, PTCP). The arguments unfold as follows. In the next section, a state-of-the-art summary on comparative studies about the application of SEA is presented. Section three focuses on the application of a modified comparative analysis on the level of application of SEA within the PTCPs in Italy. This section includes a description of the institutional framework, a presentation of data collection, and a discussion of the results. Section four concludes this paper by indicating the most relevant results and possible hints for future research studies.