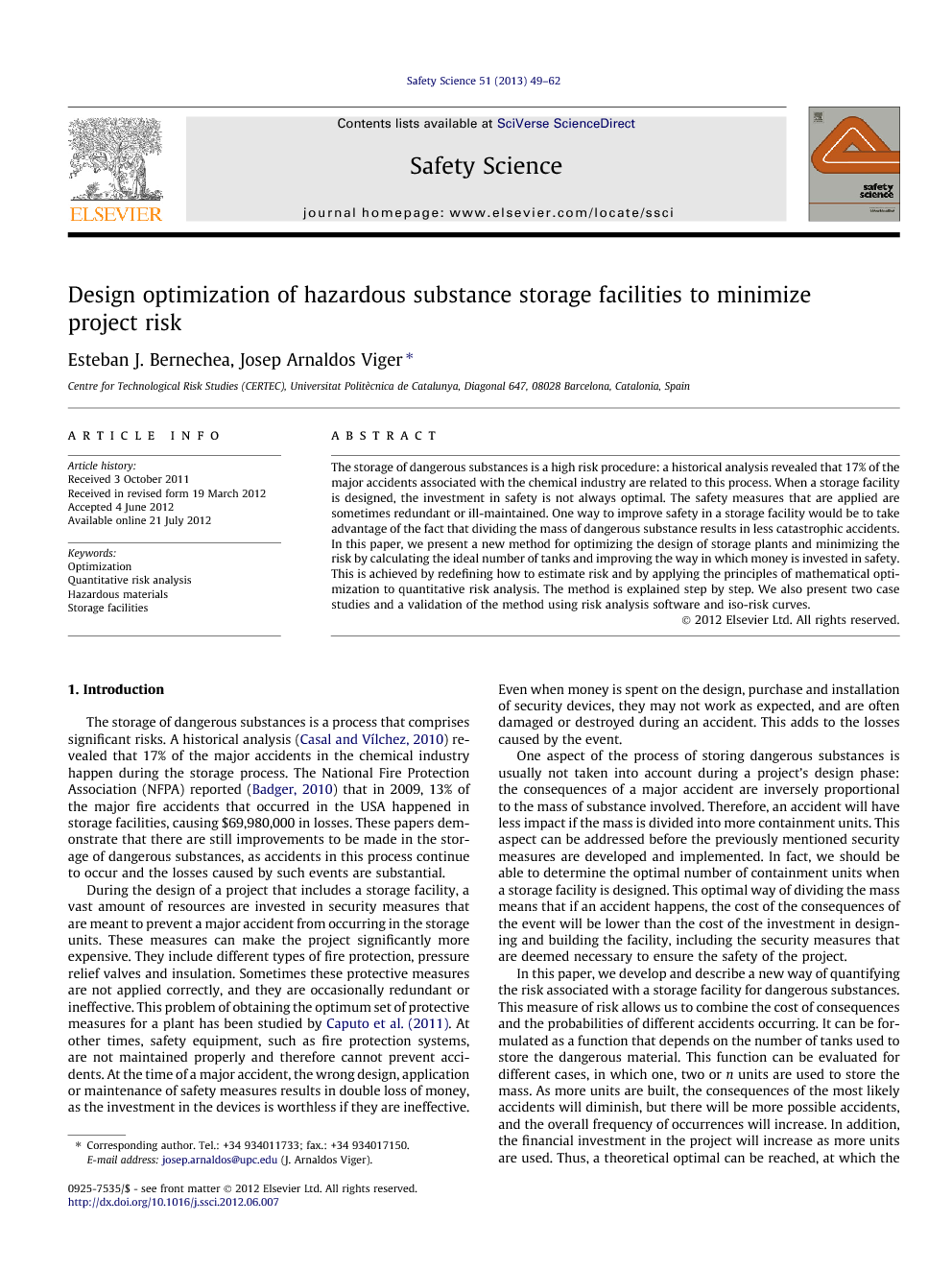 The storage of dangerous substances is a high risk procedure: a historical analysis revealed that 17% of the major accidents associated with the chemical industry are related to this process. When a storage facility is designed, the investment in safety is not always optimal. The safety measures that are applied are sometimes redundant or ill-maintained. One way to improve safety in a storage facility would be to take advantage of the fact that dividing the mass of dangerous substance results in less catastrophic accidents. In this paper, we present a new method for optimizing the design of storage plants and minimizing the risk by calculating the ideal number of tanks and improving the way in which money is invested in safety. This is achieved by redefining how to estimate risk and by applying the principles of mathematical optimization to quantitative risk analysis. The method is explained step by step. We also present two case studies and a validation of the method using risk analysis software and iso-risk curves.

The storage of dangerous substances is a process that comprises significant risks. A historical analysis (Casal and Vílchez, 2010) revealed that 17% of the major accidents in the chemical industry happen during the storage process. The National Fire Protection Association (NFPA) reported (Badger, 2010) that in 2009, 13% of the major fire accidents that occurred in the USA happened in storage facilities, causing $69,980,000 in losses. These papers demonstrate that there are still improvements to be made in the storage of dangerous substances, as accidents in this process continue to occur and the losses caused by such events are substantial. During the design of a project that includes a storage facility, a vast amount of resources are invested in security measures that are meant to prevent a major accident from occurring in the storage units. These measures can make the project significantly more expensive. They include different types of fire protection, pressure relief valves and insulation. Sometimes these protective measures are not applied correctly, and they are occasionally redundant or ineffective. This problem of obtaining the optimum set of protective measures for a plant has been studied by Caputo et al. (2011). At other times, safety equipment, such as fire protection systems, are not maintained properly and therefore cannot prevent accidents. At the time of a major accident, the wrong design, application or maintenance of safety measures results in double loss of money, as the investment in the devices is worthless if they are ineffective. Even when money is spent on the design, purchase and installation of security devices, they may not work as expected, and are often damaged or destroyed during an accident. This adds to the losses caused by the event. One aspect of the process of storing dangerous substances is usually not taken into account during a project’s design phase: the consequences of a major accident are inversely proportional to the mass of substance involved. Therefore, an accident will have less impact if the mass is divided into more containment units. This aspect can be addressed before the previously mentioned security measures are developed and implemented. In fact, we should be able to determine the optimal number of containment units when a storage facility is designed. This optimal way of dividing the mass means that if an accident happens, the cost of the consequences of the event will be lower than the cost of the investment in designing and building the facility, including the security measures that are deemed necessary to ensure the safety of the project. In this paper, we develop and describe a new way of quantifying the risk associated with a storage facility for dangerous substances. This measure of risk allows us to combine the cost of consequences and the probabilities of different accidents occurring. It can be formulated as a function that depends on the number of tanks used to store the dangerous material. This function can be evaluated for different cases, in which one, two or n units are used to store the mass. As more units are built, the consequences of the most likely accidents will diminish, but there will be more possible accidents, and the overall frequency of occurrences will increase. In addition, the financial investment in the project will increase as more units are used. Thus, a theoretical optimal can be reached, at which the weighted costs of accidents for different designs of the facility are lower than the investment that is required. In other words, the facility will be designed so that the cost of the most likely accidents will never be higher than the investment that is made. A review of previous work developed in the subject is presented, and a new approach to calculating risk is described. Then, the optimization procedure that allows obtaining the minimum risk for a storage facility, depending on its design, is presented. Finally, the method is applied to two case studies and validated through the use of risk analysis software.

Risk for storage facilities can be quantified by using mathematical programming to explore all the possible accidents that can occur in a plant. The probabilities of occurrence of these accidents can be combined with the cost of their consequences to obtain a final risk value that depends on certain aspects of the design. The risk function can be used to optimize the design of a facility by studying certain possible accidents that can occur in the type of plant that is being planned. The proposed method can be used as a decision-making tool based on risk analysis that can help to improve the design of a storage facility and minimize the associated risk. It also helps us to understand the interactions between the frequency and probability of accident, the effects and consequences of accidents, the risk of the project and the investment. It is a different approach to the traditional quantitative risk analysis, which is designed to offer a more powerful and adaptive decision-making tool. While traditional quantitative risk analysis is applied on an existing facility or on the late stages of the design of a project, to evaluate the risk it presents to the vulnerable elements that surround it, this new method allows applying aspects of QRA at the initial stages of the project, to help finding an optimum design from a risk point of view, while taking into account some economic aspects of the project as well. It is also very adaptive, as it can be applied to different types of installations and using different LUP criteria as restrictions to the optimization. Risk for industrial facilities has to be updated constantly, as more vulnerable elements can be placed near the facility. The proposed method can also be applied to an existing design, to evaluate the impact it could have over a changing landscape.