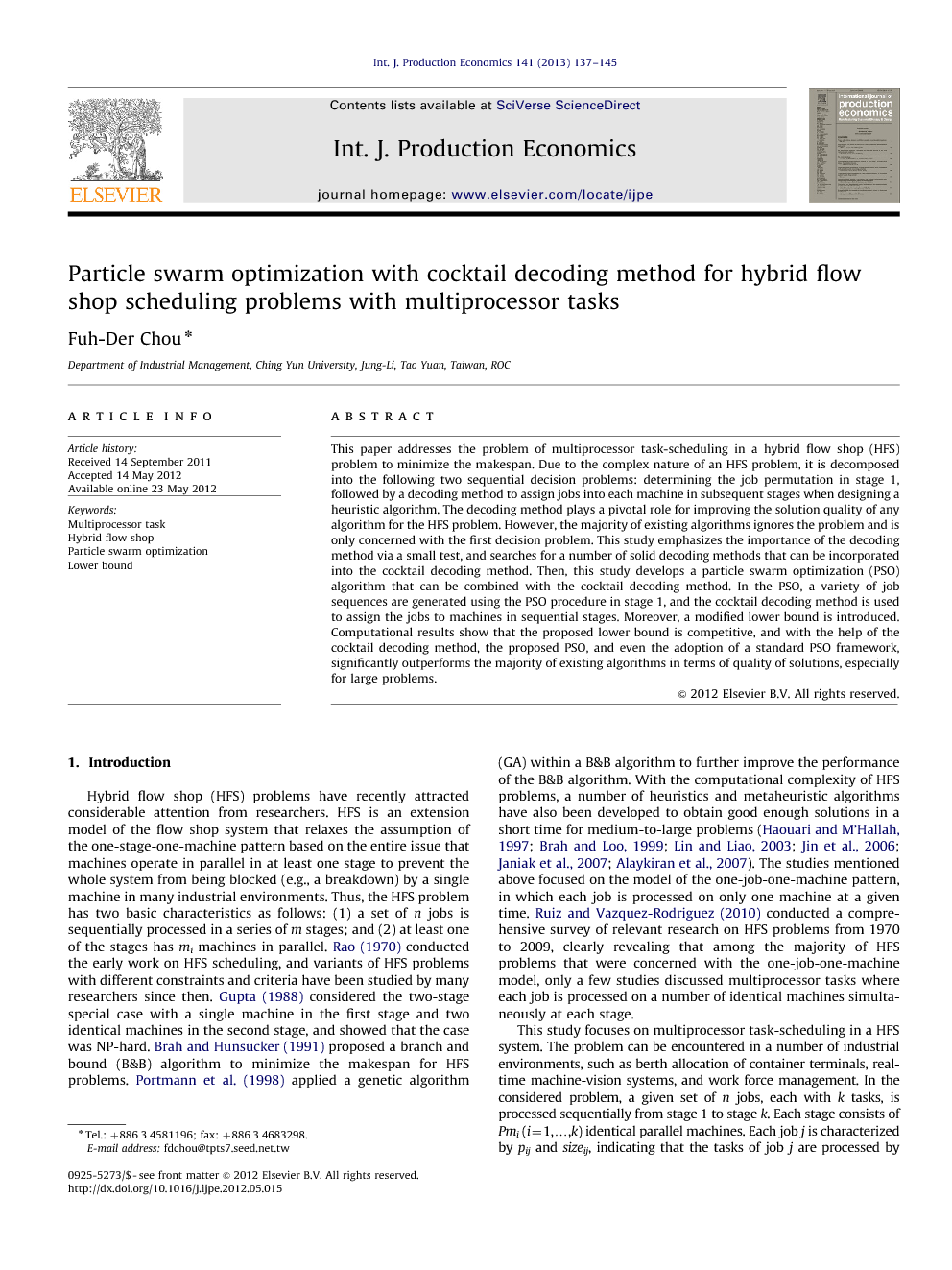 This paper addresses the problem of multiprocessor task-scheduling in a hybrid flow shop (HFS) problem to minimize the makespan. Due to the complex nature of an HFS problem, it is decomposed into the following two sequential decision problems: determining the job permutation in stage 1, followed by a decoding method to assign jobs into each machine in subsequent stages when designing a heuristic algorithm. The decoding method plays a pivotal role for improving the solution quality of any algorithm for the HFS problem. However, the majority of existing algorithms ignores the problem and is only concerned with the first decision problem. This study emphasizes the importance of the decoding method via a small test, and searches for a number of solid decoding methods that can be incorporated into the cocktail decoding method. Then, this study develops a particle swarm optimization (PSO) algorithm that can be combined with the cocktail decoding method. In the PSO, a variety of job sequences are generated using the PSO procedure in stage 1, and the cocktail decoding method is used to assign the jobs to machines in sequential stages. Moreover, a modified lower bound is introduced. Computational results show that the proposed lower bound is competitive, and with the help of the cocktail decoding method, the proposed PSO, and even the adoption of a standard PSO framework, significantly outperforms the majority of existing algorithms in terms of quality of solutions, especially for large problems.

This paper addressed the HFS with multiprocessor tasks. The HFS problem is of considerable practical interest because it can be found in various applications, such as berth allocation of container terminal, real-time machine-vision systems, and work-force management. Furthermore, the HFS problem has drawn increasing attention from researchers because of its complex nature. Since the HFS problem is NP-hard, it is divided into the following 2 decision problems when designing a solution approach: (1). the determination of the initial permutation of jobs in stage 1, and (2). the search for better decoding methods to generate a job schedule for the remaining stages. In this study, different priority rules based on the DELAY concept were used as decoding methods for small problems. The results show that the 2 decision problems affect the solution quality. Moreover, the results reveal that applying more than one decoding method is a better strategy for the considered problem. According to these observations, the PSO algorithm with the cocktail decoding method was developed, in which a number priority rules with better performances and earlier decoding methods, such as LS, PS, FF, FF1, and FF2, were integrated into the cocktail decoding method, whereas the permutations of jobs were generated by PSO, instead of the complete enumeration method. The PSO with the cocktail decoding method was examined and compared with recent well-know algorithms (CDADS, GA, CP, MA, GA_SU, PSOTL and SA) on 2 benchmark test problems. Results show that the proposed PSO could yield better performance than the existing algorithms, especially for large problems. The improvement was attributed to the help of 10 different decoding methods as schedule generation devices and to the features of the PSO process itself. Furthermore, a modified lower bound was addressed in this study to obtain more effective lower bound values. Many interesting directions for future research present themselves. Obvious extensions to this problem include the consideration of other performance measures, such as the number of tardy jobs, total tardiness–earliness costs, and total weighted tardiness, which are issues that not yet be investigated.