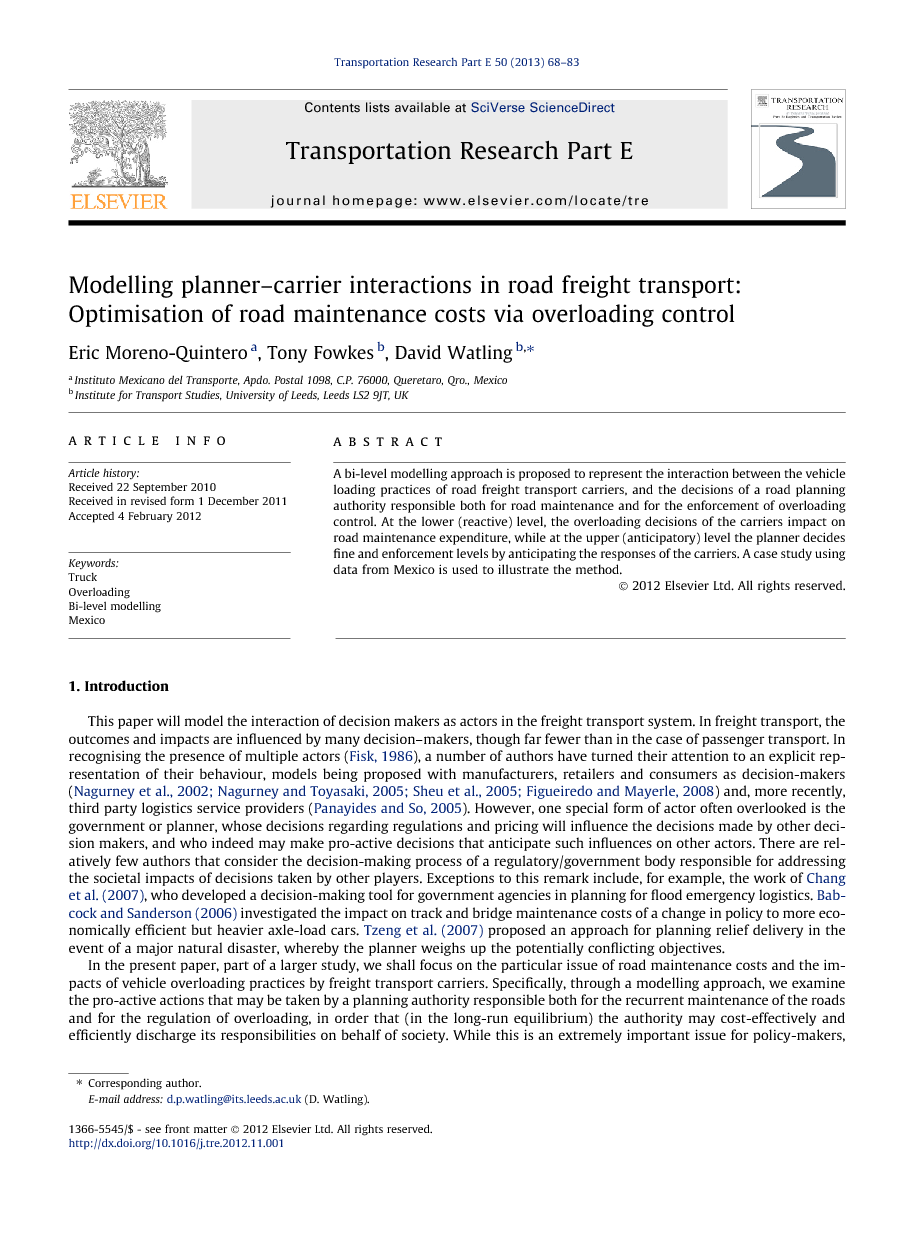 A bi-level modelling approach is proposed to represent the interaction between the vehicle loading practices of road freight transport carriers, and the decisions of a road planning authority responsible both for road maintenance and for the enforcement of overloading control. At the lower (reactive) level, the overloading decisions of the carriers impact on road maintenance expenditure, while at the upper (anticipatory) level the planner decides fine and enforcement levels by anticipating the responses of the carriers. A case study using data from Mexico is used to illustrate the method.

This paper will model the interaction of decision makers as actors in the freight transport system. In freight transport, the outcomes and impacts are influenced by many decision–makers, though far fewer than in the case of passenger transport. In recognising the presence of multiple actors (Fisk, 1986), a number of authors have turned their attention to an explicit representation of their behaviour, models being proposed with manufacturers, retailers and consumers as decision-makers (Nagurney et al., 2002, Nagurney and Toyasaki, 2005, Sheu et al., 2005 and Figueiredo and Mayerle, 2008) and, more recently, third party logistics service providers (Panayides and So, 2005). However, one special form of actor often overlooked is the government or planner, whose decisions regarding regulations and pricing will influence the decisions made by other decision makers, and who indeed may make pro-active decisions that anticipate such influences on other actors. There are relatively few authors that consider the decision-making process of a regulatory/government body responsible for addressing the societal impacts of decisions taken by other players. Exceptions to this remark include, for example, the work of Chang et al. (2007), who developed a decision-making tool for government agencies in planning for flood emergency logistics. Babcock and Sanderson (2006) investigated the impact on track and bridge maintenance costs of a change in policy to more economically efficient but heavier axle-load cars. Tzeng et al. (2007) proposed an approach for planning relief delivery in the event of a major natural disaster, whereby the planner weighs up the potentially conflicting objectives. In the present paper, part of a larger study, we shall focus on the particular issue of road maintenance costs and the impacts of vehicle overloading practices by freight transport carriers. Specifically, through a modelling approach, we examine the pro-active actions that may be taken by a planning authority responsible both for the recurrent maintenance of the roads and for the regulation of overloading, in order that (in the long-run equilibrium) the authority may cost-effectively and efficiently discharge its responsibilities on behalf of society. While this is an extremely important issue for policy-makers, articles on this topic appear relatively rarely in the formal academic literature, though this issue is evident in the wider, public-domain literature (ACSE, 2002, Dueker and Fischer, 2003, McKinnon, 2005, Knight et al., 2008 and NVF, 2008). The paper begins in Section 2 by establishing the significance of road damage due to overloading, and the potential for its mitigation by enforcement policies. Drawing on this evidence, we present in Section 3 a mathematical modelling approach for the control of overloading, which respects the reactive nature of the carriers’ decisions while allowing the planner to adopt a higher level, anticipatory role when making strategic planning decisions. In Sections 4 and 5, a case study based on Mexican data is used to illustrate the approach.

This paper has extended the methods for modelling multi-actor, multi-level modelling approaches in freight transport (Nagurney et al., 2002 and Nagurney and Toyasaki, 2005)—which consider manufacturers, retailers and consumers as decision-makers—to take into account the objective of a planner who aims for a societal optimum by minimising expenditure on road maintenance costs though overloading control. The main contributions of this paper to the literature are as follows: • A novel modelling approach has been developed in order to explicitly represent the decision-making process of the planner aiming for a societal optimum through a hierarchical, bi-level approach. This approach explicitly separates the objectives of planners and carriers, representing the anticipatory power of the planning authority as a ‘leader’. This may be contrasted with previous methodological approaches to problems of a similar structure in freight transport, which are limited by the fact that they aim to incorporate conflicting objectives of the actors into a single level optimisation problem, either by constraints (e.g. Hu et al., 2002, Nozick, 2001 and Jula et al., 2005), weighted optimisation (e.g. Korpela et al., 2001), or a (single-level) multi-objective optimisation (Tzeng et al., 2007). • As a component of our modelling approach, we have developed functions to represent the objectives of planners and carriers and have related these to decisions each may selfishly make. This provides a more realistic alternative to the aggregate ‘system-optimal’ methods (e.g. Crainic et al., 1990) of strategic freight transport planning, which aim to compute the potential benefits that would be theoretically attainable if all players conformed to the wishes of a central authority. Our bi-level method, in contrast, assumes that each player will act in their own best interest. As a result, our method produces an attainable optimum solution, rather than a theoretical optimum, as well as providing the policy measures that would lead to such an attainable optimum. • We have demonstrated our approach with a case study of Mexico, with procedures described for calibrating the elements of our method, exploiting a variety of data sources on loading practices and road damage effects. The results of the case study are a contribution to the public policy literature on road planning and maintenance ( Dueker and Fischer, 2003, McKinnon, 2005, Babcock and Sanderson, 2006 and Knight et al., 2008). We believe that, in the future, the method proposed is easily generalisable, either with alternative model assumptions or applied to alternative planning contexts. For example, in terms of the specific model assumptions we have adopted, we may wish to model the impacts of variance in demand caused by variation about the (mean) long-run equilibrium value, or the feedback from an increase in carriers’ costs to the quantity to be shipped (i.e. elastic demand). In terms of alternative planning contexts, the general approach might be applied to other kinds of externality. For example, building on Sathaye et al. (2010), we might consider extending our method to investigate optimal load factors considering the potentially conflicting objectives of minimising road maintenance impacts and minimising emissions. In this respect, the particular set of assumptions we have addressed in the present paper should be viewed as just one example of a variety of alternative (arguably more realistic) sets of assumptions that could have been made in place of those we chose. It is our intention to take the literature forward, rather than dissuade others from trying other variants in future. Indeed, we feel that these very possibilities, of taking what we have done further, are a large part of the value of the paper.