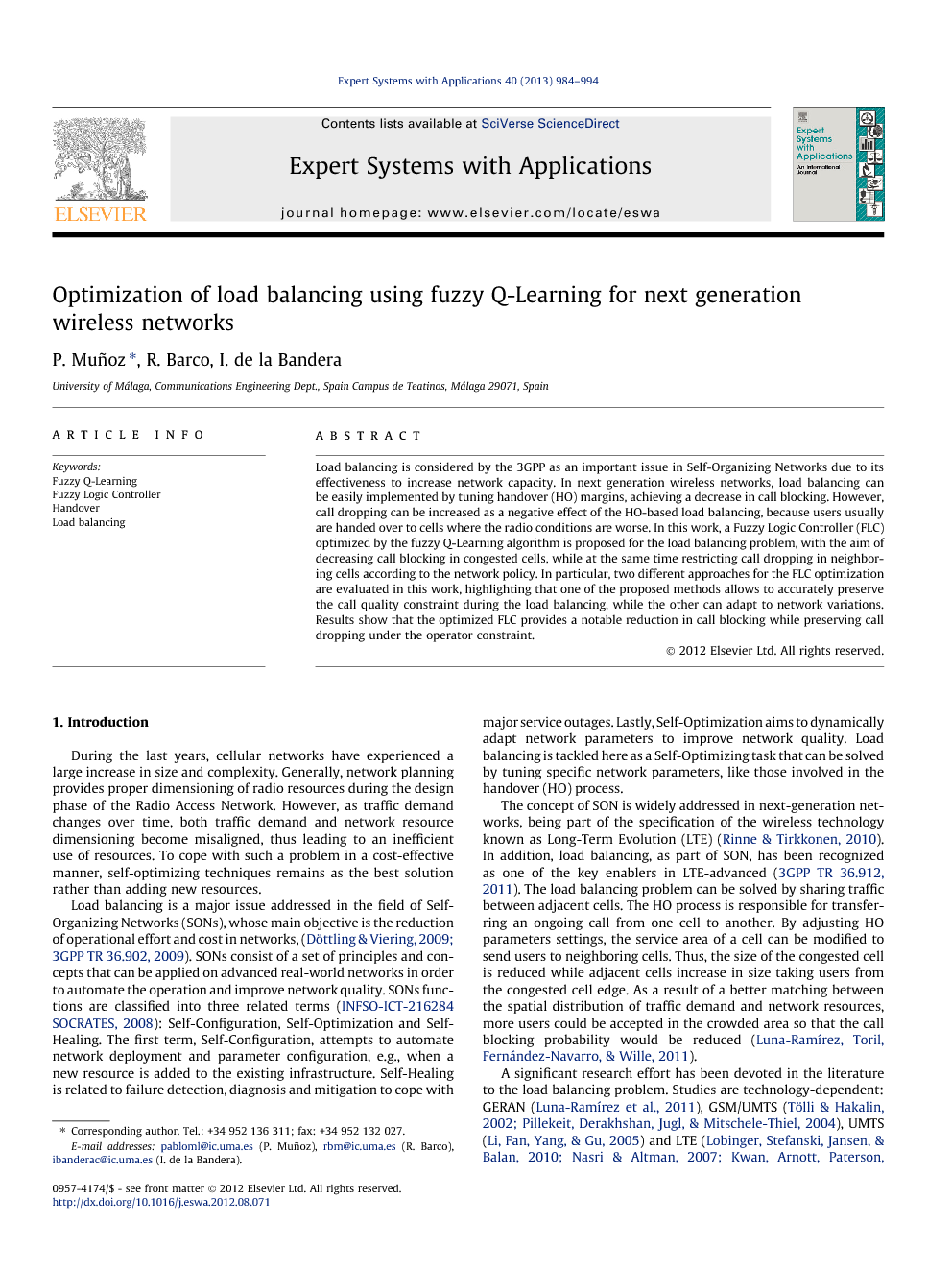 Load balancing is considered by the 3GPP as an important issue in Self-Organizing Networks due to its effectiveness to increase network capacity. In next generation wireless networks, load balancing can be easily implemented by tuning handover (HO) margins, achieving a decrease in call blocking. However, call dropping can be increased as a negative effect of the HO-based load balancing, because users usually are handed over to cells where the radio conditions are worse. In this work, a Fuzzy Logic Controller (FLC) optimized by the fuzzy Q-Learning algorithm is proposed for the load balancing problem, with the aim of decreasing call blocking in congested cells, while at the same time restricting call dropping in neighboring cells according to the network policy. In particular, two different approaches for the FLC optimization are evaluated in this work, highlighting that one of the proposed methods allows to accurately preserve the call quality constraint during the load balancing, while the other can adapt to network variations. Results show that the optimized FLC provides a notable reduction in call blocking while preserving call dropping under the operator constraint.

In this paper, the optimization of an FLC for load balancing in next generation wireless networks has been proposed, which is based on dynamically tuning HO margins. Two different optimization approaches using the fuzzy Q-Learning algorithm have been investigated. UEE approach is based on an optimization scheme that explores all the candidate FLC actions throughout the load balancing process. In this case, introducing test users into the network throughout the night or using network simulation tools are methods recommended to avoid degrading system performance when testing non-optimal actions. Once the optimal FLC configuration has been found, the FLC can be applied to the real situation. BEE is an optimization scheme that combines both exploitation and exploration to enhance performance while finding the optimal FLC actions and also to provide dynamic adaptation to system variations. The proposed methods are compared to an FLC (with no optimization) which is used as a benchmark. Simulations carried out in a non-uniformly distributed traffic scenario highlight that call blocking can be significantly reduced (from approximately 20% to 7% in the highest loaded cell), while at the same time keeping call dropping in neighboring cells under a certain level set by the operator. Simulation results show that the UEE optimization approach is a useful method to accurately preserve the call quality constraint during the load balancing by simply adjusting a call dropping threshold. It is shown that the best trade-off between CBR and CDR (given by a 7.5% of user dissatisfaction) is achieved by setting the CDR threshold to 0.06. In the case of the BEE optimization approach, performance is slightly decreased compared to UEE due to the percentage of non-optimal actions executed by the Q-Learning algorithm throughout the load balancing process (7.7% of user dissatisfaction is obtained). However, it is shown that the benefits from the BEE approach may be higher than the UEE approach because both optimization and load balancing are carried out on the same scenario at the same time, and the method can adapt to network variations. The combination of fuzzy logic with Q-Learning simplifies the task of designing the fuzzy rules of the controller. The FLC can also be considered as a cost-effective solution to increase network capacity because hardware upgrade is not necessary and manual intervention is minimized. Future work could include the application of the proposed algorithm to multimedia data services, in which other performance indicators (e.g., outage rate) would be needed to estimate the user connection quality. Finally, note that the proposed algorithms for load balancing are applicable to 4G networks, such as LTE-advanced, although LTE has been selected as a use case.