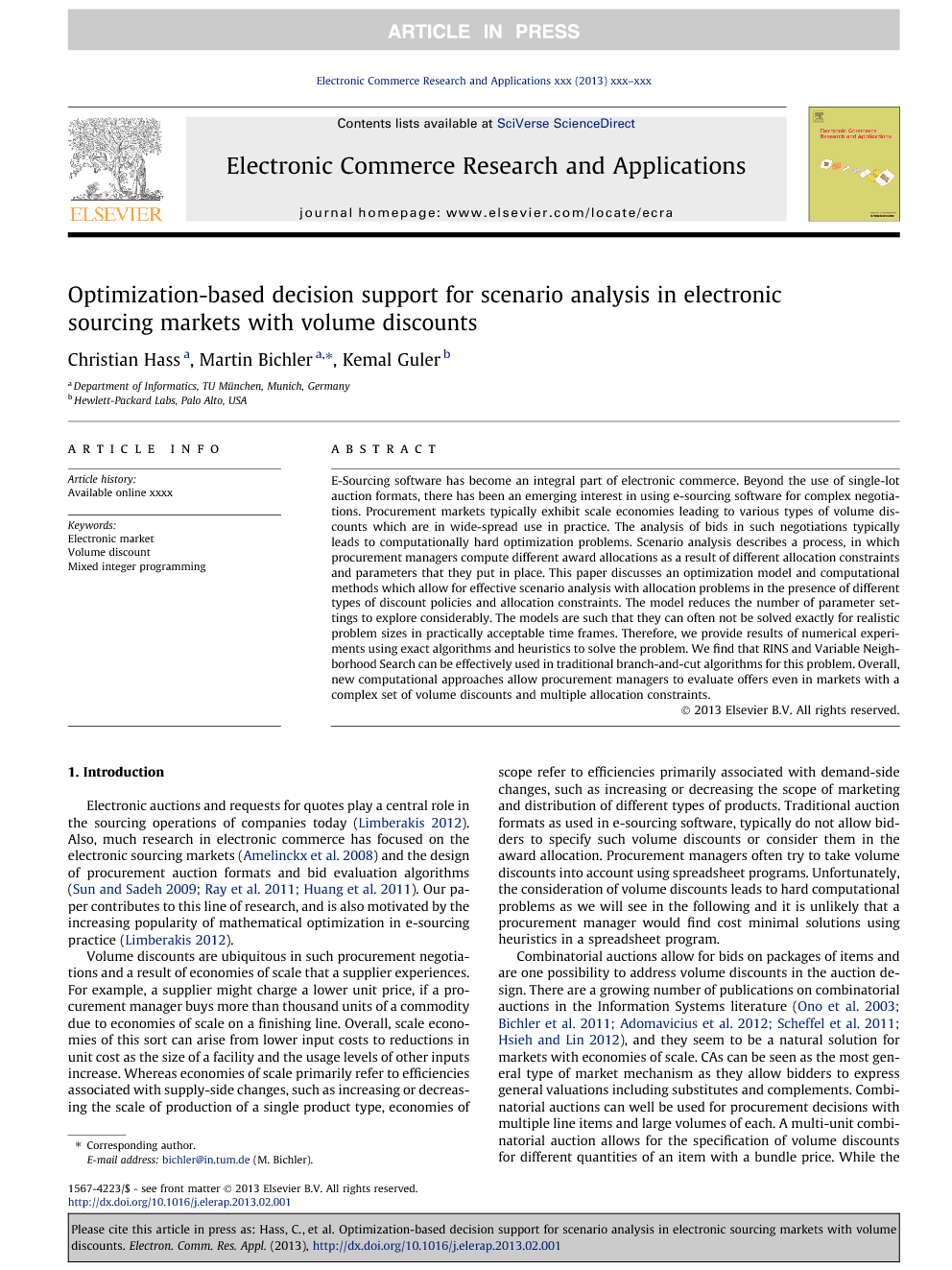 E-Sourcing software has become an integral part of electronic commerce. Beyond the use of single-lot auction formats, there has been an emerging interest in using e-sourcing software for complex negotiations. Procurement markets typically exhibit scale economies leading to various types of volume discounts which are in wide-spread use in practice. The analysis of bids in such negotiations typically leads to computationally hard optimization problems. Scenario analysis describes a process, in which procurement managers compute different award allocations as a result of different allocation constraints and parameters that they put in place. This paper discusses an optimization model and computational methods which allow for effective scenario analysis with allocation problems in the presence of different types of discount policies and allocation constraints. The model reduces the number of parameter settings to explore considerably. The models are such that they can often not be solved exactly for realistic problem sizes in practically acceptable time frames. Therefore, we provide results of numerical experiments using exact algorithms and heuristics to solve the problem. We find that RINS and Variable Neighborhood Search can be effectively used in traditional branch-and-cut algorithms for this problem. Overall, new computational approaches allow procurement managers to evaluate offers even in markets with a complex set of volume discounts and multiple allocation constraints.

E-sourcing tools are used in most companies nowadays to conduct electronic auctions and request for quotes via the internet (Limberakis 2012). Often the use of e-sourcing tools is limited to simple reverse auctions on a single lot only. Negotiations including different features of a product, multiple lots, and volume discounts are often considered too complex for e-sourcing. This largely comes from the computational complexity to compute cost-minimal allocations. Often this task is performed using heuristics in spreadsheet programs and the solution is likely to be far from the cost-minimal allocation. The example in Fig. 1 shows, why volume discounts can already lead to hard computational problems with a single lot only. With the help of only a spreadsheet program a procurement manager has little hope of finding good solutions in due time. Mathematical optimization can provide tangible decision support to not only find better solutions, but to also more effective and less time-consuming ones for the procurement manager. This paper combines different modeling approaches and computational methods from combinatorial optimization and the area of meta-heuristics to allow for effective decision support in e-sourcing. We focus on scenario analysis for winner determination problems in markets with economies of scope. The analysis shows that for restricted problem sizes these allocation problems can be solved to optimality. Also, the effort of the procurement manager is largely reduced. Finally, we propose a formulation of the problem that helps procurement managers to reduce the number of scenarios to explore. The type of decision aid discussed in this paper is made possible by the advances in hardware and algorithms in the recent years, and would have been impossible only ten years ago. We expect that with further advances in multi-core hardware architectures and respective parallel implementations of branch-and-cut algorithms larger problems can be solved only a few years from now. This not only improves the quality of the results of the bid analysis, it also makes the analysis itself more effective and less time-consuming. Although realistic problem sizes can often be solved today, larger problem instances with many items, many discount tiers, and allocation constraints still remain a barrier. Reducing the number of discount tiers or standardizing them across suppliers is one possibility to solve larger problem sizes (see also Bichler et al. 2011), but often this is not possible to impose on suppliers in procurement practice. We have shown that combinations of meta-heuristics such as RINS and VNS with exact branch-and-cut approaches are promising approaches for larger problems. While a study of all meta-heuristics is out of the scope of this paper, the analysis illustrates that meta-heuristics often improve the solution process substantially. Yet, this might still not be sufficient for large instances with more than 40 items and procurement managers want ways to compute such instances as well with good if not optimal solutions. Apart from meta-heuristics as described in this paper, custom heuristics are another avenue to explore. For example, a divide-and-conquer approach as is often used in vehicle routing problems can also be used for SQS and SQSSA, where a procurement manager divides the problem in subsets of a size, which allows for an optimal solution and applies the exact algorithms sequentially to all of these sub-problems. Constraints need to be adapted after each sub-problem, such that the overall constraints are met. Obviously, this might not yield the optimal solution as there can be infeasibilities in the last iterations. Still, this allowed us to find very good solutions for large problem sizes with hundreds of items and suppliers. Such experiments are, however, hard to generalize and heavily depend on the characteristics and constraints of particular problem instances. Nevertheless, such computational approaches to the exact problem formulation are typically faster and more accurate than the simple heuristics often deployed in practice based on spreadsheet calculators. Due to the fact that such decision aids are often used to support multi-million dollar procurement decisions, advanced computational approaches are well justified.