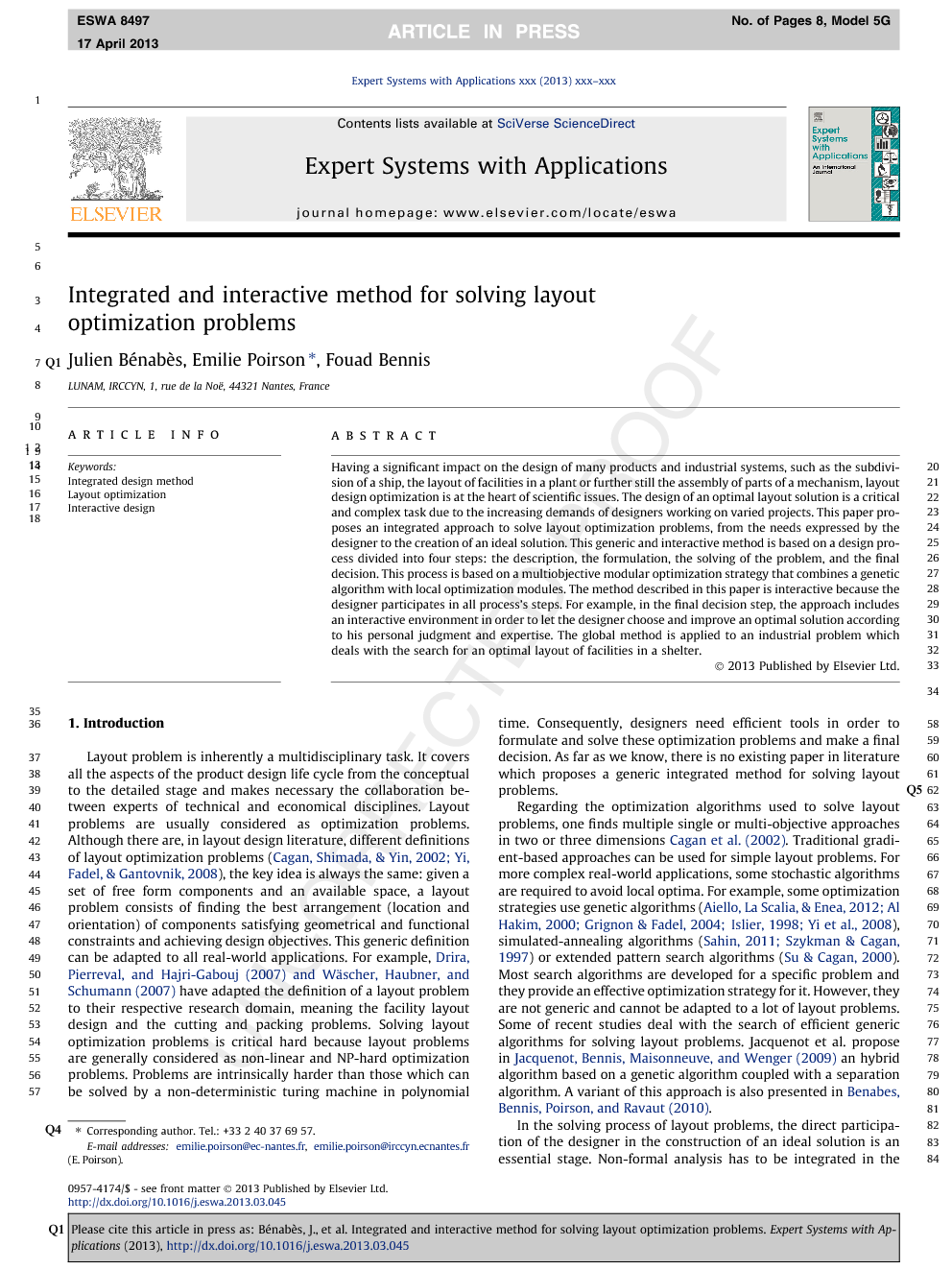 Having a significant impact on the design of many products and industrial systems, such as the subdivision of a ship, the layout of facilities in a plant or further still the assembly of parts of a mechanism, layout design optimization is at the heart of scientific issues. The design of an optimal layout solution is a critical and complex task due to the increasing demands of designers working on varied projects. This paper proposes an integrated approach to solve layout optimization problems, from the needs expressed by the designer to the creation of an ideal solution. This generic and interactive method is based on a design process divided into four steps: the description, the formulation, the solving of the problem, and the final decision. This process is based on a multiobjective modular optimization strategy that combines a genetic algorithm with local optimization modules. The method described in this paper is interactive because the designer participates in all process’s steps. For example, in the final decision step, the approach includes an interactive environment in order to let the designer choose and improve an optimal solution according to his personal judgment and expertise. The global method is applied to an industrial problem which deals with the search for an optimal layout of facilities in a shelter.

Layout problem is inherently a multidisciplinary task. It covers all the aspects of the product design life cycle from the conceptual to the detailed stage and makes necessary the collaboration between experts of technical and economical disciplines. Layout problems are usually considered as optimization problems. Although there are, in layout design literature, different definitions of layout optimization problems (Cagan et al., 2002 and Yi et al., 2008), the key idea is always the same: given a set of free form components and an available space, a layout problem consists of finding the best arrangement (location and orientation) of components satisfying geometrical and functional constraints and achieving design objectives. This generic definition can be adapted to all real-world applications. For example, Drira et al., 2007 and Wäscher et al., 2007 have adapted the definition of a layout problem to their respective research domain, meaning the facility layout design and the cutting and packing problems. Solving layout optimization problems is critical hard because layout problems are generally considered as non-linear and NP-hard optimization problems. Problems are intrinsically harder than those which can be solved by a non-deterministic turing machine in polynomial time. Consequently, designers need efficient tools in order to formulate and solve these optimization problems and make a final decision. As far as we know, there is no existing paper in literature which proposes a generic integrated method for solving layout problems. Regarding the optimization algorithms used to solve layout problems, one finds multiple single or multi-objective approaches in two or three dimensions Cagan et al. (2002). Traditional gradient-based approaches can be used for simple layout problems. For more complex real-world applications, some stochastic algorithms are required to avoid local optima. For example, some optimization strategies use genetic algorithms (Aiello et al., 2012, Al Hakim, 2000, Grignon and Fadel, 2004, Islier, 1998 and Yi et al., 2008), simulated-annealing algorithms (Sahin, 2011 and Szykman and Cagan, 1997) or extended pattern search algorithms (Su & Cagan, 2000). Most search algorithms are developed for a specific problem and they provide an effective optimization strategy for it. However, they are not generic and cannot be adapted to a lot of layout problems. Some of recent studies deal with the search of efficient generic algorithms for solving layout problems. Jacquenot et al. propose in Jacquenot, Bennis, Maisonneuve, and Wenger (2009) an hybrid algorithm based on a genetic algorithm coupled with a separation algorithm. A variant of this approach is also presented in Benabes, Bennis, Poirson, and Ravaut (2010). In the solving process of layout problems, the direct participation of the designer in the construction of an ideal solution is an essential stage. Non-formal analysis has to be integrated in the search for an optimal design. In general, the designer almost always has to correct either the design variables, the optimization criteria, and so on. We can find in Michalek and Papalambros (2002) a significant contribution to the integration of the designer in the layout optimization process. The method is applied to architectural layouts, and designer suggests to the optimization algorithm initial solutions which take into account his own expertise. Moreover, interactivity with designer can be used to insert qualitative fitness or user perceptions in the design process (Poirson et al.). In layout design, Brintrup et al. have already developed an interactive genetic algorithm based framework for handling qualitative criteria in design optimization (Brintrup, Ramsden, & Tiwari, 2007). Also, the designer can interact with the optimization process in order to make a final choice on the alternatives proposed by the optimization algorithm. Interactive decision making environments are necessary to make this final choice (Balling et al. and Stump et al., 2003). According to the analysis of existing work on layout optimization, this paper proposes an innovative integrated and interactive optimization method for solving layout problems, from the description of the layout problem to the final decision. The paper is organized as follows. Section 2 is dedicated to the description of the different steps of the method. In Section 3, the method is applied to an industrial layout application. Section 4 concludes this paper.

This paper proposes an innovative integrated method for layout optimization problems. All the steps of the global layout optimization process are described, from the description of the problem to the final decision making made by the designer. The main aim of this integrated approach is to be generic in order to adapt to most of layout applications. Thus, the method presents for example a new classification of layout components in order to take into account all designer’s requirements. A modular genetic algorithm is also used in order to solve most of complex optimization problems by combining a genetic algorithm with some local optimization modules which are designed to solve specific requirements of the layout problem which has to be solved. All these functions are included in a software demonstrator we develop, which tends to become an essential tool for a design team. Outlooks are now dedicated to the interactivity of the global optimization process with the designer. The method, proposed in this paper, already allows the designer to use an interactive environment in order to compare layout solutions and interact with some selected designs in order to improve its performances. This interaction with the designer can also be used in the description and formulation steps of the process by helping the designer to define all the requirements of the problem. Lots of requirements cannot be easily formulated by simple mathematical expressions and it would be judicious to propose to the designer an interactive environment to perform this step. Actually, virtual reality tools can also be used to visualize and interact with some layout designs during the solving step of the process or during the decision making step. This exploration is the next step of our work.