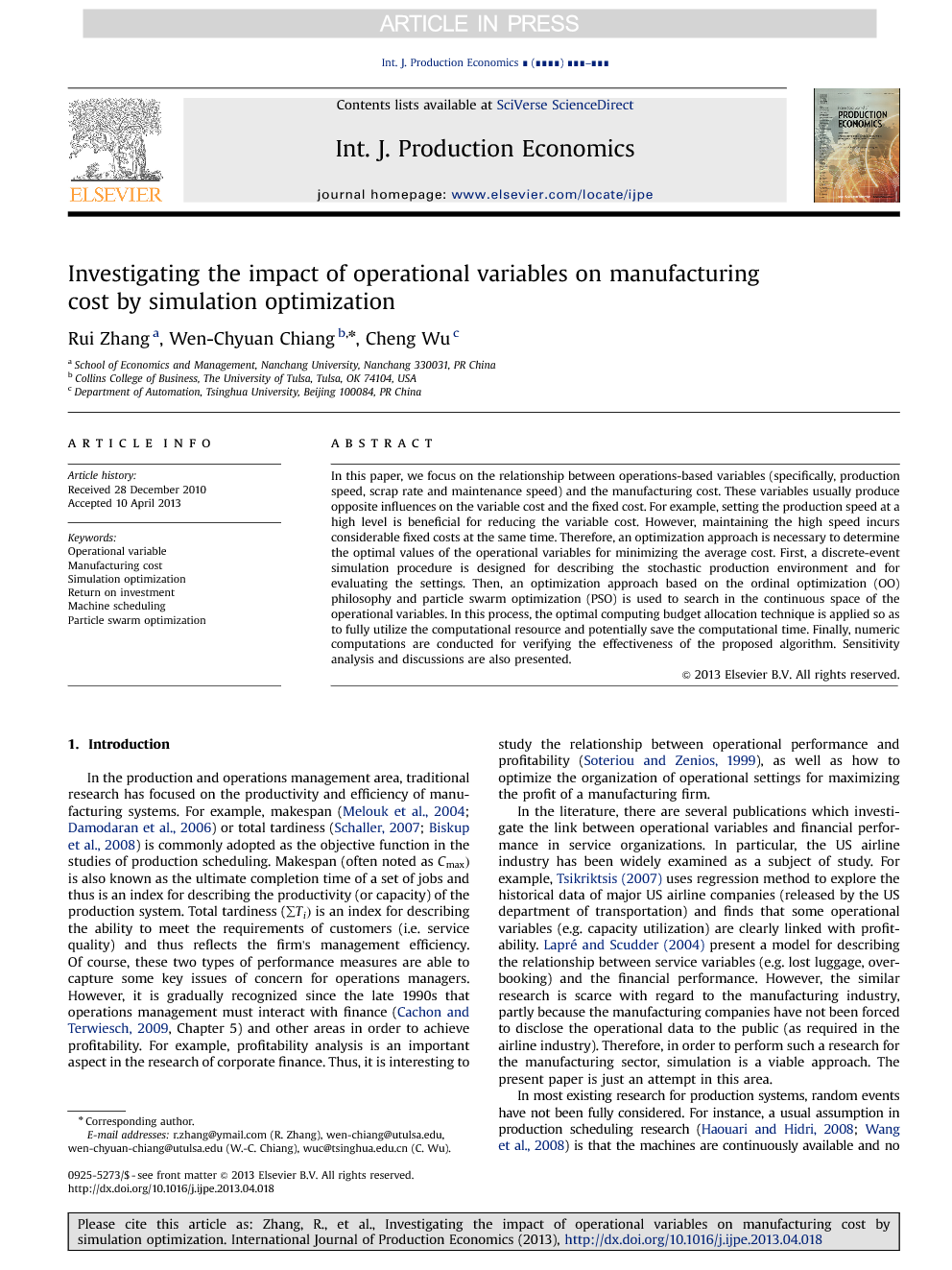 In this paper, we focus on the relationship between operations-based variables (specifically, production speed, scrap rate and maintenance speed) and the manufacturing cost. These variables usually produce opposite influences on the variable cost and the fixed cost. For example, setting the production speed at a high level is beneficial for reducing the variable cost. However, maintaining the high speed incurs considerable fixed costs at the same time. Therefore, an optimization approach is necessary to determine the optimal values of the operational variables for minimizing the average cost. First, a discrete-event simulation procedure is designed for describing the stochastic production environment and for evaluating the settings. Then, an optimization approach based on the ordinal optimization (OO) philosophy and particle swarm optimization (PSO) is used to search in the continuous space of the operational variables. In this process, the optimal computing budget allocation technique is applied so as to fully utilize the computational resource and potentially save the computational time. Finally, numeric computations are conducted for verifying the effectiveness of the proposed algorithm. Sensitivity analysis and discussions are also presented.

In the production and operations management area, traditional research has focused on the productivity and efficiency of manufacturing systems. For example, makespan (Melouk et al., 2004 and Damodaran et al., 2006) or total tardiness (Schaller, 2007 and Biskup et al., 2008) is commonly adopted as the objective function in the studies of production scheduling. Makespan (often noted as Cmax)Cmax) is also known as the ultimate completion time of a set of jobs and thus is an index for describing the productivity (or capacity) of the production system. Total tardiness (∑Ti)∑Ti) is an index for describing the ability to meet the requirements of customers (i.e. service quality) and thus reflects the firm's management efficiency. Of course, these two types of performance measures are able to capture some key issues of concern for operations managers. However, it is gradually recognized since the late 1990s that operations management must interact with finance (Cachon and Terwiesch, 2009, Chapter 5) and other areas in order to achieve profitability. For example, profitability analysis is an important aspect in the research of corporate finance. Thus, it is interesting to study the relationship between operational performance and profitability (Soteriou and Zenios, 1999), as well as how to optimize the organization of operational settings for maximizing the profit of a manufacturing firm. In the literature, there are several publications which investigate the link between operational variables and financial performance in service organizations. In particular, the US airline industry has been widely examined as a subject of study. For example, Tsikriktsis (2007) uses regression method to explore the historical data of major US airline companies (released by the US department of transportation) and finds that some operational variables (e.g. capacity utilization) are clearly linked with profitability. Lapré and Scudder (2004) present a model for describing the relationship between service variables (e.g. lost luggage, over-booking) and the financial performance. However, the similar research is scarce with regard to the manufacturing industry, partly because the manufacturing companies have not been forced to disclose the operational data to the public (as required in the airline industry). Therefore, in order to perform such a research for the manufacturing sector, simulation is a viable approach. The present paper is just an attempt in this area. In most existing research for production systems, random events have not been fully considered. For instance, a usual assumption in production scheduling research (Haouari and Hidri, 2008 and Wang et al., 2008) is that the machines are continuously available and no defects will be produced. This is of course inconsistent with the real-world situation. Indeed, if random factors (such as machine breakdown and job failure) are incorporated into the research model, we will face a discrete event dynamic system (DEDS) (Cassandras and Lafortune, 2008), and thus discrete-event simulation (Banks et al., 2009) is needed for the performance evaluation of such systems involving randomness. Therefore, in this paper, we adopt simulation-based optimization to find satisfactory settings for the adjustable operational variables in the manufacturing system. The considered objective to minimize is the unit manufacturing cost, which is a measure for profitability if the price of the product is determined exogenously (e.g. according to the market conditions). The rest of the paper is organized as follows. Section 2 introduces some topics related with our research and methods. Section 3 defines the model of the problem we are to study. Section 4 describes the discrete-event simulation procedure for the discussed production model. Section 5 proposes a crude model for fast evaluation of operational settings to the production system. Section 6 describes the approach we propose for optimizing the operational variables in the system, which is based on the ordinal optimization methodology and particle swarm optimization. Section 7 introduces the numerical setup for the computational experiments. Section 8 presents the key computational results and comparisons. Section 9 performs sensitivity analysis on the long-term parameters in the system, leading to a discussion about the return on investment. Finally, Section 10 concludes the paper.

In this paper, we aim at optimizing the operational variables for a uniform parallel machine production system with stochastic events. In particular, we consider the control policy for production speed, error rate and maintenance progress of each machine. The objective is to minimize the manufacturing cost (including fixed cost and variable cost). A simulation procedure is designed to evaluate the performance of the production system under a specific setting of operational variables. Based on the principles of simulation optimization, we propose a two-stage solution method, in which the first stage picks a set of candidates using PSO with crude evaluation, and the second stage identifies the best setting from the available candidates with a limited number of simulation replications. The effectiveness of the approach is verified by comparison with a PSO based on exact simulation. Finally, sensitivity analysis is conducted with respect to the input parameters of the optimization problem. We focus on the relationship between technology improvement and manufacturing cost reduction. The results can provide guidance for adjustment of operational settings in case of system changes and also helps to estimate the reasonable level of new investment for improving the system. This paper proposes a theoretically valid framework based on simulation optimization for studying the interaction between operational variables and manufacturing cost. Clearly, a limitation of this study is that it is not aimed at a very specific type of production. When real-world production data are available (e.g. from ERP or MES), we need to develop more detailed simulation models, in which the distribution of the random variables should be parameterized according to these data. However, the optimization approach described in this paper is applicable in most scenarios.