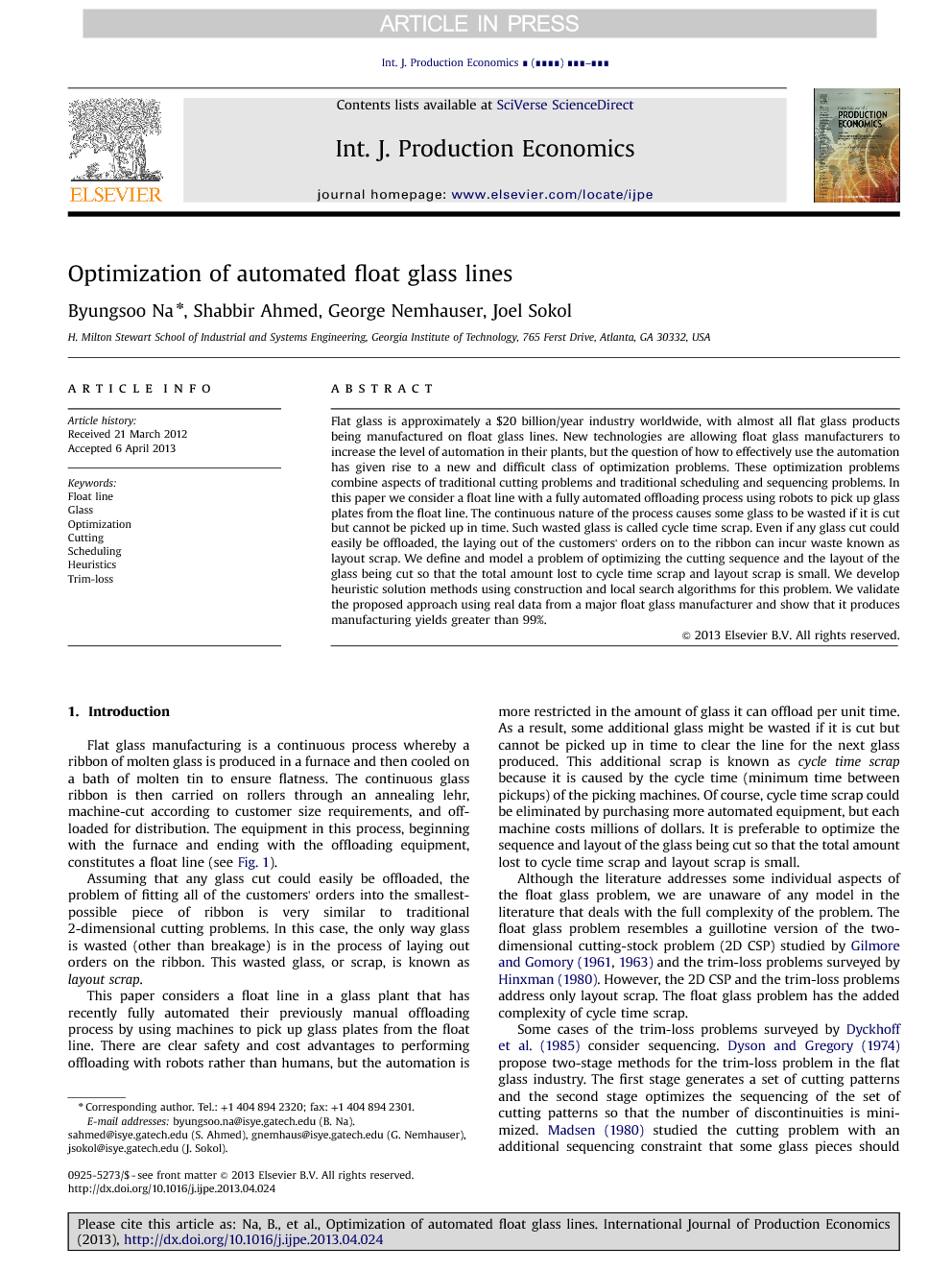 Flat glass is approximately a $20 billion/year industry worldwide, with almost all flat glass products being manufactured on float glass lines. New technologies are allowing float glass manufacturers to increase the level of automation in their plants, but the question of how to effectively use the automation has given rise to a new and difficult class of optimization problems. These optimization problems combine aspects of traditional cutting problems and traditional scheduling and sequencing problems. In this paper we consider a float line with a fully automated offloading process using robots to pick up glass plates from the float line. The continuous nature of the process causes some glass to be wasted if it is cut but cannot be picked up in time. Such wasted glass is called cycle time scrap. Even if any glass cut could easily be offloaded, the laying out of the customers' orders on to the ribbon can incur waste known as layout scrap. We define and model a problem of optimizing the cutting sequence and the layout of the glass being cut so that the total amount lost to cycle time scrap and layout scrap is small. We develop heuristic solution methods using construction and local search algorithms for this problem. We validate the proposed approach using real data from a major float glass manufacturer and show that it produces manufacturing yields greater than 99%.

Motivated by operational issues in real-world glass manufacturing, this paper addressed a problem of laying out and sequencing orders so as to minimize wasted glass, called scrap. There are two different types of scrap, layout scrap and cycle time scrap, and a number of operational restrictions are imposed by the manufacturer because of the limitations of the glass-making process and the equipment involved. We proposed a two-phase approach: snap construction and constructing cutting and offload schedules. The heuristic solution methods which we proposed improve manufacturing yields from 95% (the current practice) to greater than 99%. According to the United States census bureau, the costs of materials for the flat glass manufacturing industry in the U.S. was $1609 million in 2007 (United States Census Bureau, 2013). Therefore, a 4% increase in manufacturing yields can contribute a savings of about $64 million in the flat glass manufacturing industry of the U.S. and much more globally. Moreover, our sensitivity analysis helps to give managerial insights regarding issues such as the optimal number of offloading machines.