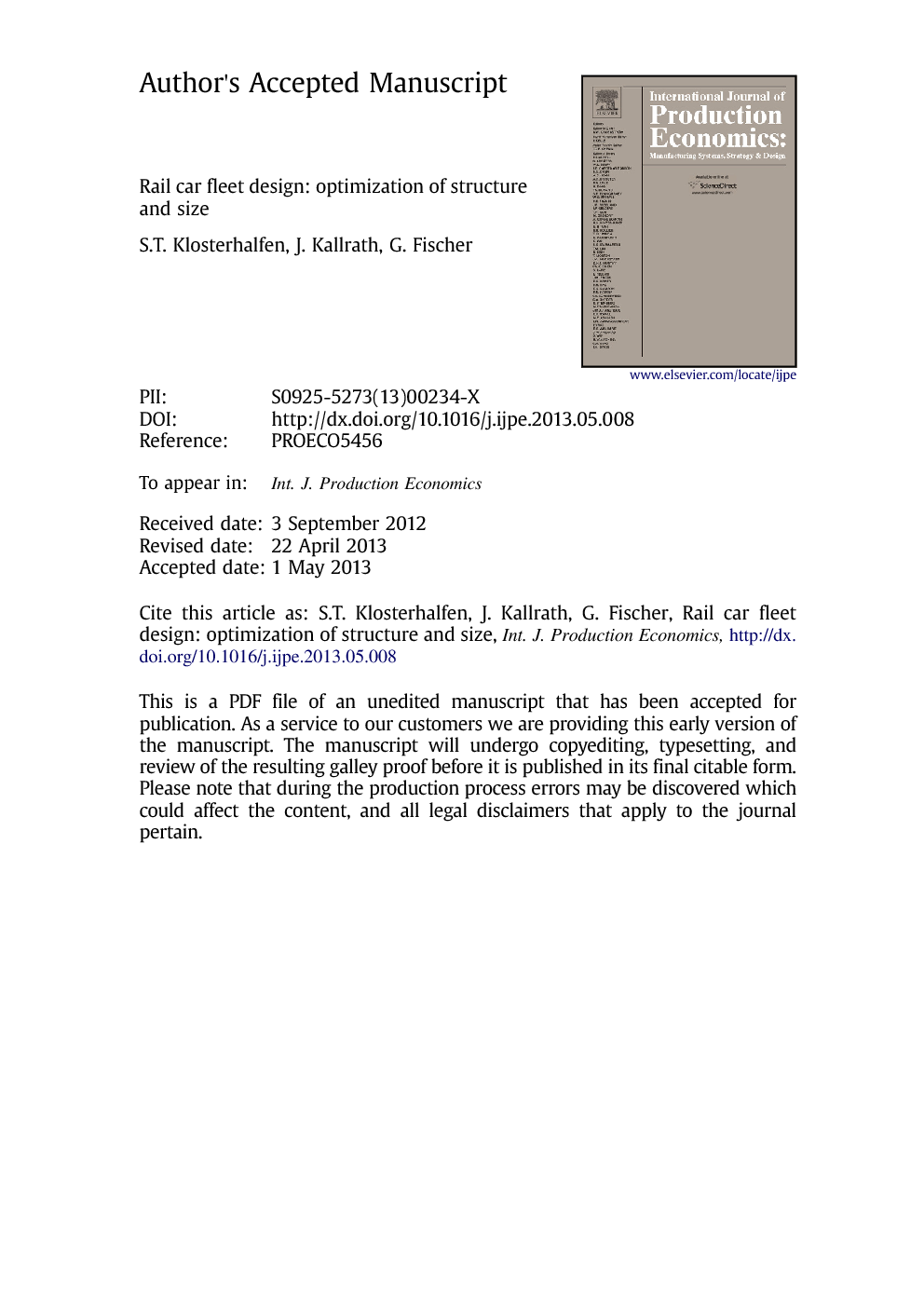 We develop a model to determine the optimal structure and size of a rail car fleet at a chemical company under uncertainty in demand and travel times as well as substitution between rail car types. First, we formulate an MILP model that accounts for the substitution relations between the types and minimizes the total direct rail car cost under given rail car availability constraints and a predefined maximum number of types. Second, based on the fleet structure obtained by the MILP model, the fleet size is computed by using an approximation from inventory theory that considers the existing uncertainties. Compared to the current approach of the rail car fleet management team, the model produces a reduction in safety stock of 120 rail cars and thus direct cost savings of 8% as well as further indirect cost savings due to a smaller number of rail car types, which reduces the switching effort of the rail cars on the storage tracks.

In the chemical industry, rail cars represent an important means of transportation. Due to safety regulations many products are not allowed to be transported on the road. Moreover, rail cars can carry larger volumes than trucks. The product poses minimum requirements on a rail car with respect to material, valve model, heating, etc. The combination of these characteristics specifies a certain rail car type and determines its cost. Types with higher quality characteristics can be used as substitutes for lower ones and thus are more flexible. At the company, which motivated this research, the task of the rail car fleet management team is to secure the supply with rail cars of an appropriate type while at the same time solve the trade-off between (i) minimizing the direct cost for rail cars and (ii) minimizing the number of different rail car types. The latter aspect is relevant because the smaller the set of rail car types, the easier it is to access a requested type on the storage tracks due to a sorted parking strategy. As the number grows, space limitations require a chaotic parking strategy, which increases the switching effort and thus causes higher indirect costs. Further, the smaller the set of types, the lower the required safety stock due to a larger risk pooling effect. These benefits have to be traded off against the higher costs for more flexible types. Over the last decade, the fleet management team has invested considerable effort to reduce the overall cost and free up storage space on the site. In a first analysis of the rail car fleet, old and seldomly used types that could be easily replaced by others have been discarded. Thus, the number of so-called standard rail cars (which we will be focusing on in this paper) has been reduced from approximately 2600 to 1800. Similarly, the number of standard rail car types has been reduced from approximately 100 to 60. These tremendous improvements have been made possible through hard work, but without any support from sophisticated mathematical models. To realize further improvement and be well prepared for the future, management felt that such models are required. In the light of the growing future business trend the rail car demand is expected to increase as well. Despite the already implemented reforms, it will not be feasible to meet these demands with the current order-filling strategy and structure of the rail car fleet. The limited space on the site simply hampers an increase in the number of cars. Moreover, as part of a new strategy the company considers to increase its rail car ownership. This is based on the insight that owning a rail car is much cheaper than leasing one, if the usage period is sufficiently large. It takes about 10 years for the investment in a rail car to amortize. In order to make a suggestion with regard to which types of rail cars to buy (fleet structure) and in which quantity (fleet size), a second thorough quantitative analysis is required. In this paper we present the outcome of this second analysis. Together with the fleet management team mathematical models have been developed that take into account the existing trade-offs and are used as decision support for designing the rail car fleet. This analysis is based on a new approach which combines mixed integer linear programming (MILP) models supporting substitution between the different rail car types with techniques used in inventory management theory to derive safety stocks in order to account for the existing uncertainties in demand and travel times of the rail cars. The remainder of the paper is structured as follows. In Section 2, we briefly review the literature. The mathematical models are developed in Section 3. In Section 4, we apply the models to the real-world problem data. We conclude the paper in Section 5.

In this paper we have developed a two-step model to determine the optimal structure and size of a rail car fleet at a chemical company under uncertainty in demand and travel times as well as substitution between rail car types. First, we have used an MILP formulation to determine the optimal fleet structure by minimizing the total direct rail car cost under substitution, given rail car availability constraints and a predefined maximum number of types. Second, uncertainties are accounted for in the subsequent fleet-sizing phase by employing an approximation from inventory theory. This approach is easily implementable and applicable to large problems, since it avoids an explicit and complicated consideration of the substitution possibilities directly in the stochastic inventory model. Even though the developed model surely contains certain company-specific aspects, the general approach of dividing the entire problem into two more easily manageable subproblems is widely applicable. Compared to the current planning and execution approach of the rail car fleet management team, the presented model produces a reduction in safety stock of approximately 120 rail cars and thus direct cost savings of 8%. Moreover, the number of rail car types is reduced from 41 to 9. This smaller set of different types has additional indirect cost advantages. It enables a parking strategy of the rail cars on the storage tracks where each type is assigned to a separate track. Thus, a requested rail car of a specific type can be more easily accessed and provided. In terms of future research it is worthwhile to analyze the gap between the presented sequential approach and a stochastic inventory model that directly accounts for the substitution possibilities. Due to the potentially large number of rail car types and substitution relations, as observed in our practical example, the development of fast solution procedures for such an inventory model is most likely required.