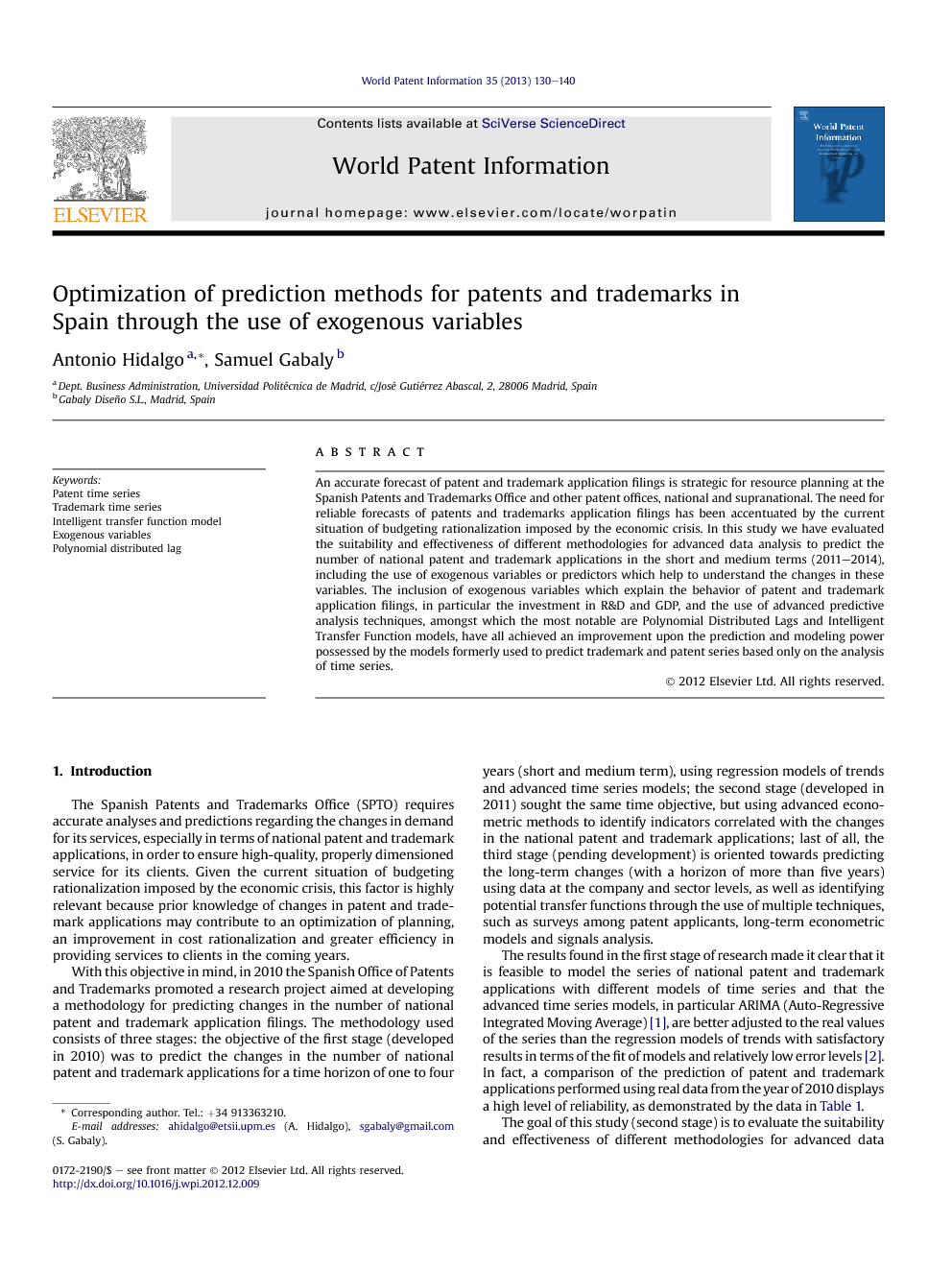 An accurate forecast of patent and trademark application filings is strategic for resource planning at the Spanish Patents and Trademarks Office and other patent offices, national and supranational. The need for reliable forecasts of patents and trademarks application filings has been accentuated by the current situation of budgeting rationalization imposed by the economic crisis. In this study we have evaluated the suitability and effectiveness of different methodologies for advanced data analysis to predict the number of national patent and trademark applications in the short and medium terms (2011–2014), including the use of exogenous variables or predictors which help to understand the changes in these variables. The inclusion of exogenous variables which explain the behavior of patent and trademark application filings, in particular the investment in R&D and GDP, and the use of advanced predictive analysis techniques, amongst which the most notable are Polynomial Distributed Lags and Intelligent Transfer Function models, have all achieved an improvement upon the prediction and modeling power possessed by the models formerly used to predict trademark and patent series based only on the analysis of time series.

The inclusion of exogenous variables which explain the behavior of patent and trademark applications, as well as the investment in R&D and GDP, and the use of advanced predictive analysis techniques, amongst which the most notable are PDL and ITF models, have all achieved an improvement upon the prediction and modeling power possessed by the models formerly used to predict trademark and patent series based only on the analysis of time series, in particular the ARIMA model (1,1,0). These models have provided innovative results by modeling the behavior of the time series with a high level of fit and with mean absolute percentage errors of less than 10% in all cases. For patents applications, the ITF model presents the lowest MAPE (1.69%) and the best determination coefficient R2 (0.95) in comparison with the simple econometric model presents (MAPE of 7.28% and R2 0.66), ARIMA (1,1,0) model (MAPE of 5.26% and R2 0.98) and PDL model (MAPE of 4.97% and R2 0.77). For trademarks applications, ITF and PDL models presents the best results. While the ITF model has an MAPE of 4.19% and a determination coefficient R2 of 0.85, the PDL model has a higher error (4.78%) but a best determination coefficient (0.93); nevertheless, the ITF model displays less statistics errors. The simple econometric model and the ARIMA (1,1,0) model presents a higher MAPE (10.0% and 5.82%, respectively). The ITF model, which has selected the ARIMA form (0,1,0) as optimal with predictors, surpasses all other advanced models proposed in terms of the degree of fit (fewer errors), improving the selection of predictors and optimizing the predictions which are obtained. Fig. 8 and Fig. 9 show the predictions made by the ITF model and 95% confidence intervals. Patent predictions show a flat evolution in the period 2011–2014. Nevertheless the confidence interval of the prediction reaches the 20% of the forecast value in 2014 (+/− 362 patent applications). Regarding the trademark prediction, the model shows a dampened trend in the same period, reaching a confidence interval of 47.3% in 2014 (+/− 15,535 trademark applications). In general, all the models present a similar level of variability in the predictions apart from the econometric model for patents and ARIMA (1,1,0) for trademarks. Table 7 shows, in a numerical format, the predictions of national patent and trademark application series over the period of 2011–2014. In the case of patent applications, a rather minor trend in changes is predicted, whereas for trademark applications an increase is expected as of the year 2012. Last of all, the use of the VAR method, from which impulse response functions have been derived and the variance decomposition for the patent and trademark application series, has served to evaluate the time-related impacts of disturbances of a standard deviation in exogenous variables such as firm investment in R&D and number of researchers, and GDP, respectively. It has been verified that the investment in R&D which is made by firms has an effect delayed by at least 2 years and sustained over time on patent applications, a result which has also been confirmed by the ITF and PDL models, and that the variation in GDP also has clear effects on the changes in trademark applications, though with a significant weight on the historical changes in trademark applications in later periods. The fact that a relevant portion of the variability in the series of patent and trademark applications originates from lags in the past changes of the same variables to be predicted, as can be seen in the variance decomposition analyses, implies that a high percentage of the variance in the series can be explained by autoregressive components, and exogenous variables give added forecasting power. On the other hand, qualitative information based on surveys about the intention to apply for patents and trademarks in the long term could complement the quantitative models used up to now and extend them into the long term, as is already being successfully performed at international entities such as the EPO, WIPO and USPTO. In this sense the next steps for future research could be focused on extending the prediction horizon to the mid to long term (3–5 or more years) using alternative techniques such as qualitative surveys based on questionnaires to trademark and patent applicants and panels of experts.