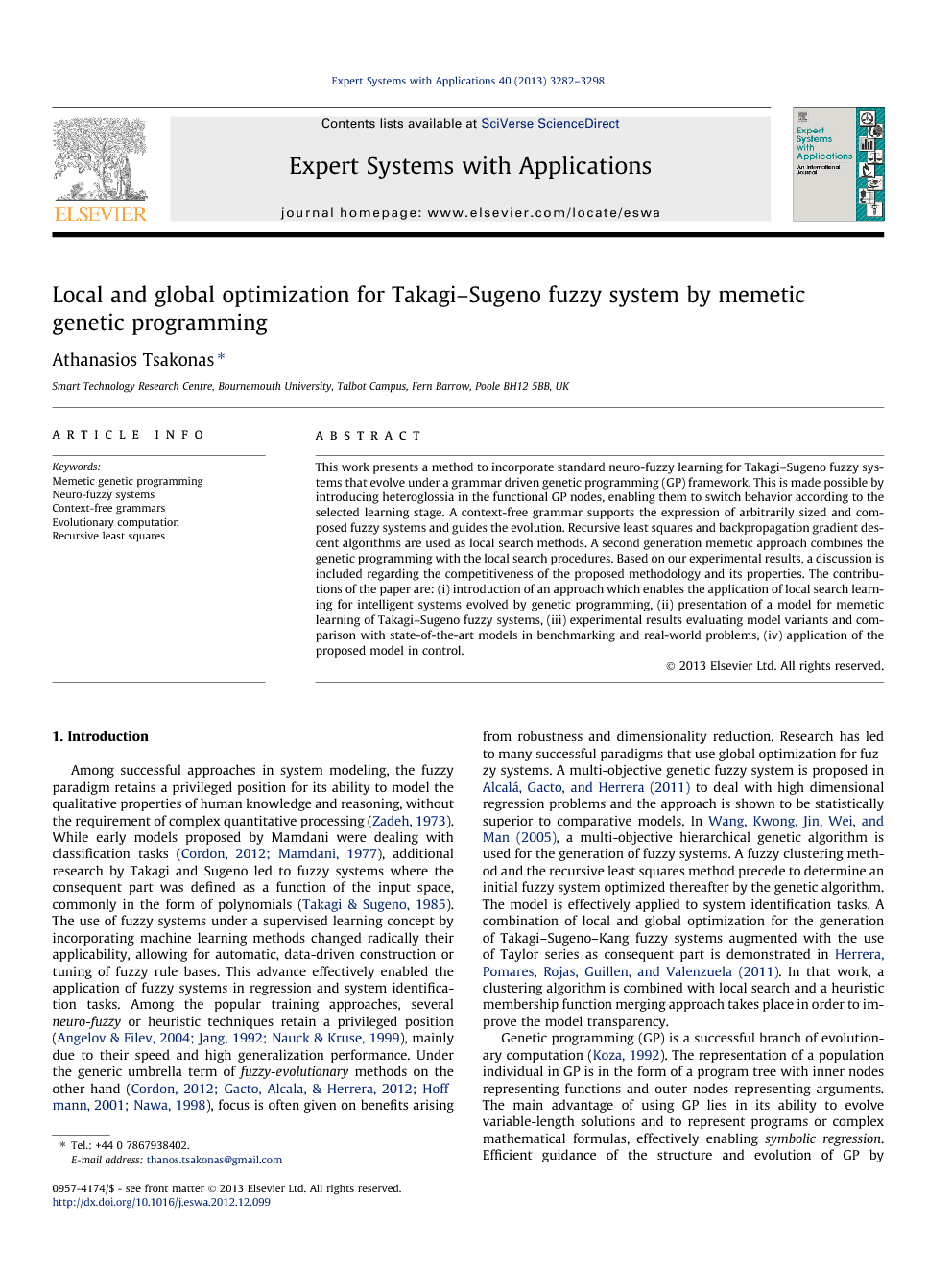 This work presents a method to incorporate standard neuro-fuzzy learning for Takagi–Sugeno fuzzy systems that evolve under a grammar driven genetic programming (GP) framework. This is made possible by introducing heteroglossia in the functional GP nodes, enabling them to switch behavior according to the selected learning stage. A context-free grammar supports the expression of arbitrarily sized and composed fuzzy systems and guides the evolution. Recursive least squares and backpropagation gradient descent algorithms are used as local search methods. A second generation memetic approach combines the genetic programming with the local search procedures. Based on our experimental results, a discussion is included regarding the competitiveness of the proposed methodology and its properties. The contributions of the paper are: (i) introduction of an approach which enables the application of local search learning for intelligent systems evolved by genetic programming, (ii) presentation of a model for memetic learning of Takagi–Sugeno fuzzy systems, (iii) experimental results evaluating model variants and comparison with state-of-the-art models in benchmarking and real-world problems, (iv) application of the proposed model in control.

This paper proposed a method to incorporate standard neuro-fuzzy procedures into GP-generated fuzzy systems for regression, by enriching the functional set of GP to support heteroglossia. In the proposed novel memetic GP system, MEMFIS, the evolution is controlled by a context-free grammar. Local search optimization is consisted of recursive least squares for the consequent parts of the rules, and gradient descent backpropagation for tuning and replacing the MFs in the antecedent part of the rules. Local search learning corresponds to the equivalent notion of memes, and its results are encoded in the GP genes and pass down to next generations. To apply local search a parametric rate was proposed, inspired by cultural outbreaks. Variants of MEMFIS were compared and the proposed memetic configuration was shown to perform better in the examined cases. The system was then compared with several state-of-the-art regression systems in two real-world regression tasks and one forecasting problem from the engineering domain. MEMFIS was shown to generalize better in two of the examined cases and it had the second best performance in the third one. We then applied MEMFIS to the inverse pendulum control task. We set the state space of this problem to be identical to neuro-fuzzy literature, without however having to impose any human-designed rule configuration in our case. MEMFIS was able to evolve a very competitive solution as compared to the literature results. Several lines of research can be followed for MEMFIS. We plan to examine different training schemes and rates for local search throughout evolution. Instead of using a predetermined variable rate to invoke local search, an adaptive local search rate might improve the algorithm’s efficiency. In respect of this, a distance metric could be applied on the population, for applying a distribution-based local search (Hart, 1994). Similarly, the incorporation of a probabilistic memetic framework (Nguyen et al., 2009) may provide improved search and will be examined. The concept of heteroglossia was used in this work to combine three optimization methods; possibly it can be used for other reasons too, such as solving multi-objective problems or evolution tracking and self-adaptation. The proposed model for combining local search learning with grammar guided genetic programming could also be expanded to include other GP-based structures, such as GP-based neural networks or GP-based Fuzzy Petri nets (Tsakonas, 2006). Finally, backpropagation gradient descent learning could be incorporated in a model that uses genetic programming to evolve fuzzy rule-based ensembles (Tsakonas & Gabrys, 2012a).