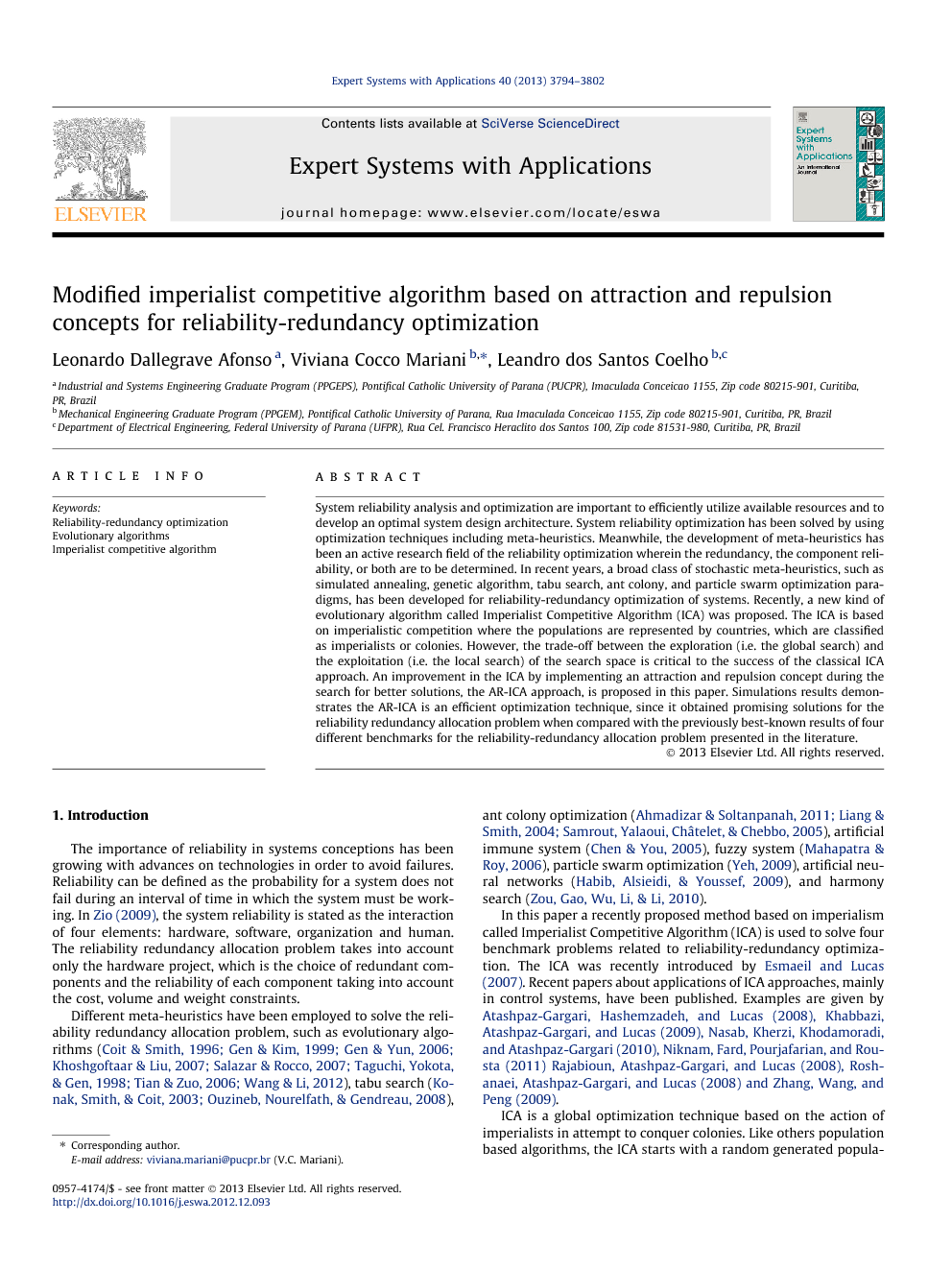 System reliability analysis and optimization are important to efficiently utilize available resources and to develop an optimal system design architecture. System reliability optimization has been solved by using optimization techniques including meta-heuristics. Meanwhile, the development of meta-heuristics has been an active research field of the reliability optimization wherein the redundancy, the component reliability, or both are to be determined. In recent years, a broad class of stochastic meta-heuristics, such as simulated annealing, genetic algorithm, tabu search, ant colony, and particle swarm optimization paradigms, has been developed for reliability-redundancy optimization of systems. Recently, a new kind of evolutionary algorithm called Imperialist Competitive Algorithm (ICA) was proposed. The ICA is based on imperialistic competition where the populations are represented by countries, which are classified as imperialists or colonies. However, the trade-off between the exploration (i.e. the global search) and the exploitation (i.e. the local search) of the search space is critical to the success of the classical ICA approach. An improvement in the ICA by implementing an attraction and repulsion concept during the search for better solutions, the AR-ICA approach, is proposed in this paper. Simulations results demonstrates the AR-ICA is an efficient optimization technique, since it obtained promising solutions for the reliability redundancy allocation problem when compared with the previously best-known results of four different benchmarks for the reliability-redundancy allocation problem presented in the literature.

The importance of reliability in systems conceptions has been growing with advances on technologies in order to avoid failures. Reliability can be defined as the probability for a system does not fail during an interval of time in which the system must be working. In Zio (2009), the system reliability is stated as the interaction of four elements: hardware, software, organization and human. The reliability redundancy allocation problem takes into account only the hardware project, which is the choice of redundant components and the reliability of each component taking into account the cost, volume and weight constraints. Different meta-heuristics have been employed to solve the reliability redundancy allocation problem, such as evolutionary algorithms (Coit and Smith, 1996, Gen and Kim, 1999, Gen and Yun, 2006, Khoshgoftaar and Liu, 2007, Salazar and Rocco, 2007, Taguchi et al., 1998, Tian and Zuo, 2006 and Wang and Li, 2012), tabu search (Konak et al., 2003 and Ouzineb et al., 2008), ant colony optimization (Ahmadizar and Soltanpanah, 2011, Liang and Smith, 2004 and Samrout et al., 2005), artificial immune system (Chen & You, 2005), fuzzy system (Mahapatra & Roy, 2006), particle swarm optimization (Yeh, 2009), artificial neural networks (Habib, Alsieidi, & Youssef, 2009), and harmony search (Zou, Gao, Wu, Li, & Li, 2010). In this paper a recently proposed method based on imperialism called Imperialist Competitive Algorithm (ICA) is used to solve four benchmark problems related to reliability-redundancy optimization. The ICA was recently introduced by Esmaeil and Lucas (2007). Recent papers about applications of ICA approaches, mainly in control systems, have been published. Examples are given by Atashpaz-Gargari et al., 2008, Khabbazi et al., 2009, Nasab et al., 2010, Niknam et al., 2011, Rajabioun et al., 2008, Roshanaei et al., 2008 and Zhang et al., 2009. ICA is a global optimization technique based on the action of imperialists in attempt to conquer colonies. Like others population based algorithms, the ICA starts with a random generated population called countries. Those countries are divided between imperialists and colonies. The imperialists are the best candidate solution and the colonies are the rest of them. The main action that leads the search for better solutions in the ICA is the colonies movement towards the imperialists. This mechanism makes the population to converge to certain spots in the search space where the best solution founded so far are located. Many stochastic optimization methods suffer from the premature convergence problem. This problem is caused when the algorithm gets trapped in a local optimum region due to poor exploration of the search space. In A Diversity Guided Swarm Optimizer proposed and evaluated in Ursem, 2002, Riget and Vesterstrøm, 2002 and Ursem, 2003, a concept of attraction and repulsion is employed in the particle swarm optimization (PSO) in an attempt to overcome the premature convergence problem. The repulsion phase is activated when the population (swarm) has a low diversity and the individuals (particles) are repelled in order to better explore the search space. When the population reaches a high diversity it switches back to the attraction phase and the individuals return to converge. Based on these actions, the Attraction and Repulsion ICA (AR-ICA) is proposed and evaluated in this paper. Although instead of using a function to calculate the population’s diversity as proposed in the ARPSO, the AR-ICA uses the distance between the colony from its imperialist to alternate between the attraction and repulsion phase. The remainder of this paper is organized as follows. In Section 2 the reliability-redundancy optimization problem is introduced. The characteristics of ICA and AR-ICA approaches are detailed in Section 3. The problem formulation for reliability-redundancy optimization and its assumptions are given in Section 4. Moreover, Section 4 also presents the simulation results for those optimization problems. Finally, the conclusion and further research are discussed in Section 5.

The ICA is a recent global optimization technique. In this study, the ICA and AR-ICA were employed to solve four different designs for the reliability-redundancy allocation problem and a mechanism based on an attraction and repulsion concept has been implemented in AR-ICA a better exploration of the search space. Simulation results based on some well-known four problems in reliability-redundancy allocation presented in Table 5, Table 6, Table 7, Table 8, Table 9, Table 10, Table 11 and Table 12 revealed that AR-ICA presented excellent performance in terms of solution quality. Moreover, the comparison with studies in the literature involving the same problems demonstrated that the AR-ICA provided an improvement in the evaluated benchmarks and reveals to be an effective method to solve reliability-redundancy allocation problems. In other words, we can say that proposed ICA-AR is able to find solutions of a quality comparable to those previously published in the literature. Further researches to improve the ICA are currently being studied by the authors, such as the use of cultural algorithm to adjust the ICA parameters over the runs and new problems related to systems reliability are being investigated as well.