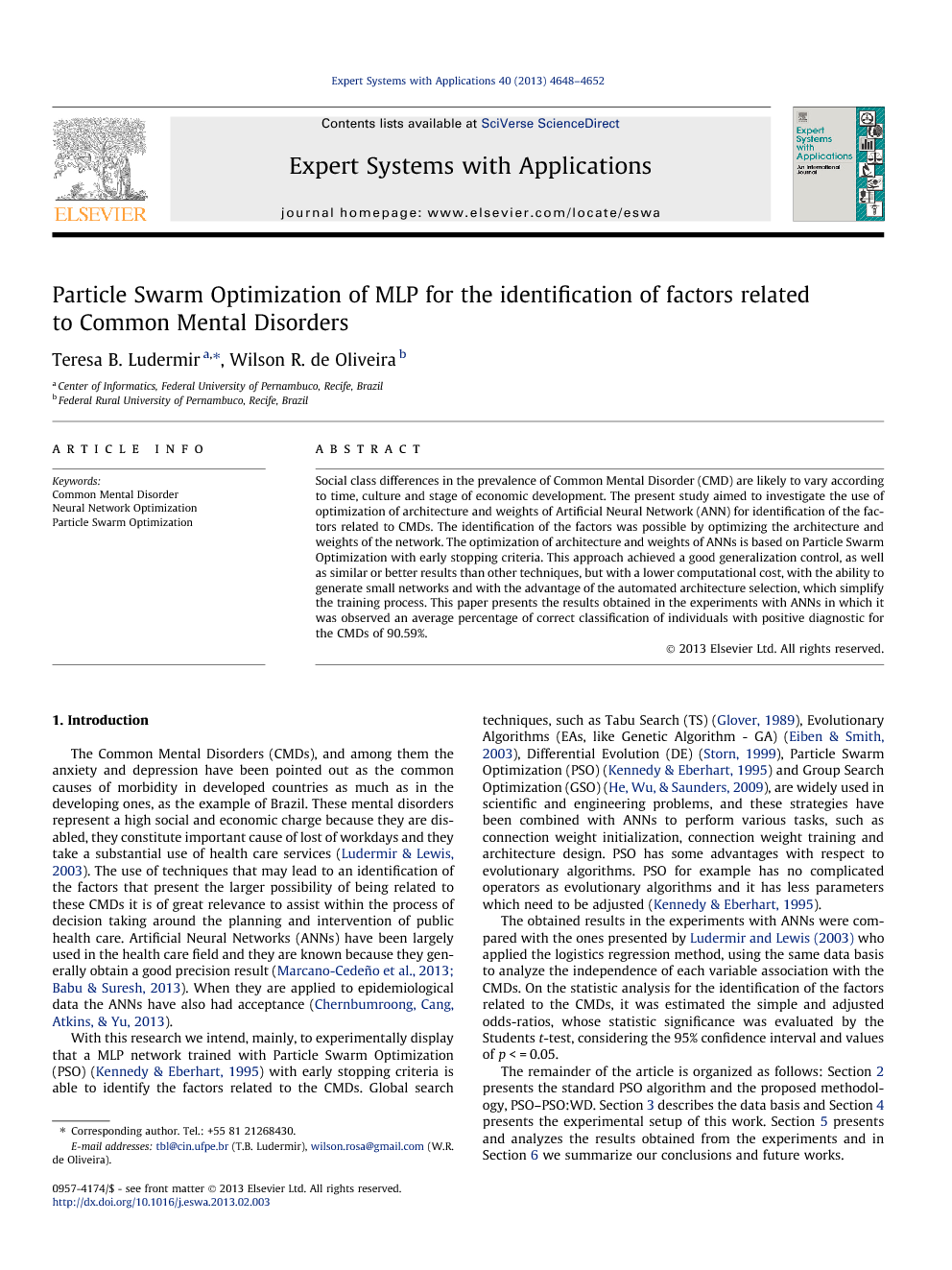 Social class differences in the prevalence of Common Mental Disorder (CMD) are likely to vary according to time, culture and stage of economic development. The present study aimed to investigate the use of optimization of architecture and weights of Artificial Neural Network (ANN) for identification of the factors related to CMDs. The identification of the factors was possible by optimizing the architecture and weights of the network. The optimization of architecture and weights of ANNs is based on Particle Swarm Optimization with early stopping criteria. This approach achieved a good generalization control, as well as similar or better results than other techniques, but with a lower computational cost, with the ability to generate small networks and with the advantage of the automated architecture selection, which simplify the training process. This paper presents the results obtained in the experiments with ANNs in which it was observed an average percentage of correct classification of individuals with positive diagnostic for the CMDs of 90.59%.

The Common Mental Disorders (CMDs), and among them the anxiety and depression have been pointed out as the common causes of morbidity in developed countries as much as in the developing ones, as the example of Brazil. These mental disorders represent a high social and economic charge because they are disabled, they constitute important cause of lost of workdays and they take a substantial use of health care services (Ludermir & Lewis, 2003). The use of techniques that may lead to an identification of the factors that present the larger possibility of being related to these CMDs it is of great relevance to assist within the process of decision taking around the planning and intervention of public health care. Artificial Neural Networks (ANNs) have been largely used in the health care field and they are known because they generally obtain a good precision result (Marcano-Cedeño et al., 2013 and Babu and Suresh, 2013). When they are applied to epidemiological data the ANNs have also had acceptance (Chernbumroong, Cang, Atkins, & Yu, 2013). With this research we intend, mainly, to experimentally display that a MLP network trained with Particle Swarm Optimization (PSO) (Kennedy & Eberhart, 1995) with early stopping criteria is able to identify the factors related to the CMDs. Global search techniques, such as Tabu Search (TS) (Glover, 1989), Evolutionary Algorithms (EAs, like Genetic Algorithm - GA) (Eiben & Smith, 2003), Differential Evolution (DE) (Storn, 1999), Particle Swarm Optimization (PSO) (Kennedy & Eberhart, 1995) and Group Search Optimization (GSO) (He, Wu, & Saunders, 2009), are widely used in scientific and engineering problems, and these strategies have been combined with ANNs to perform various tasks, such as connection weight initialization, connection weight training and architecture design. PSO has some advantages with respect to evolutionary algorithms. PSO for example has no complicated operators as evolutionary algorithms and it has less parameters which need to be adjusted (Kennedy & Eberhart, 1995). The obtained results in the experiments with ANNs were compared with the ones presented by Ludermir and Lewis (2003) who applied the logistics regression method, using the same data basis to analyze the independence of each variable association with the CMDs. On the statistic analysis for the identification of the factors related to the CMDs, it was estimated the simple and adjusted odds-ratios, whose statistic significance was evaluated by the Students t-test, considering the 95% confidence interval and values of p < = 0.05. The remainder of the article is organized as follows: Section 2 presents the standard PSO algorithm and the proposed methodology, PSO–PSO:WD. Section 3 describes the data basis and Section 4 presents the experimental setup of this work. Section 5 presents and analyzes the results obtained from the experiments and in Section 6 we summarize our conclusions and future works.

In this work, we have analyzed the feed-forward neural networks weights and architecture optimization problem with the use of a methodology entirely based on the Particle Swarm Optimization algorithm. The results obtained by this methodology are situated between the results presented by other well studied techniques such as Genetic Algorithms or Simulated Annealing. This methodology was inspired by a similar process described in Zhang and Shao (2000), where two PSO algorithms are interleaved in the optimization of architectures (outer PSO) and connection weights (inner PSO) of MLP neural networks. A small modification made in this work concerning generalization control improvements was the use of the weight decay heuristic in the inner PSO, i.e. the process of weights adjustment. Even though the logistic model is the methodology normally used when the purpose is to identify the factors of risk that have association with the variable answer, where the coefficients of regression may be interpreted by the odds-ratios, it was possible to observe good results in the experiments with MLP with relation to the prediction of the positive cases for the studied problem. The obtained average in our experiments around the correct classification of the individuals with positive diagnose for the CMDs was of 90.59%. We may observe that the presented results in the experiments with neural networks were similar to those obtained with the statistic technique of logistic regression applied by Ludermir and Lewis (2003), when it is compared with the analysis made with simple odds-ratios, where the variables education, income, gender and insertion in the productive process were statistically significant, with the values of p < = 0.0001. After the adjustment of the odds-ratios in the results obtained by Ludermir and Lewis (2003), education and income presented relationship with CMDs. It is important to remind that those variables, in all the experiments with ANNs, they were present in the obtained results, standing out among the variables that presented larger percentage of use for the algorithm, in other words, larger possibility of they being related with CMDs. With the optimizing network architecture (input node, hidden nodes and connections) it was possible to establish which variables presented greater probability of being related with the studied problem. That is, the applied methodology in the experiment, is presented as an interesting alternative for problems application when the purpose is the identification of factors related to the variable response (network output). Initially, experiments were accomplished with other neural networks, for example RBF (Radial Basis Function), however the obtained results were not satisfactory when compared to the results obtained in experiments accomplished with a MPL network. Besides, experiments were also accomplished with a MPL network trained with the Backpropagation algorithm, however, the obtained results were inferior to the results presented by the MLP network trained with the PSO–PSO:WD algorithm. From the results presented in this work, we may conclude that a trained MLP network with the PSO–PSO:WD algorithm, with simultaneous optimizing of its architecture and weights, may be an interesting alternative to the statistic model of logistic regression, to the analysis of the factors related with the CMDs, because the neural network is able to detect all the possible interactions among the many explaining variables. It is possible to observe also that, this automatic and simultaneous optimizing of the network architecture may be an interesting alternative for the process of variables selection, eliminating from the network input set the variable that is not so important to the problem. The permanence of variables that are not important to the patterns classification may aggravate distortions in the result presented by the network [12]. As future work possibility we pointed out: (1) to measure the performance of new experiments, applying the same methodology, with the use of others data set; (2) the use of other optimizing techniques, as for example Group Search Optimization; (3) the fusion of the two interleaved tasks (inner PSO and outer PSO) in a single PSO searching for weights and architectures as a truly simultaneous optimization process; (4) the addition of a connectivity pattern optimization process to the PSO–PSO algorithm.