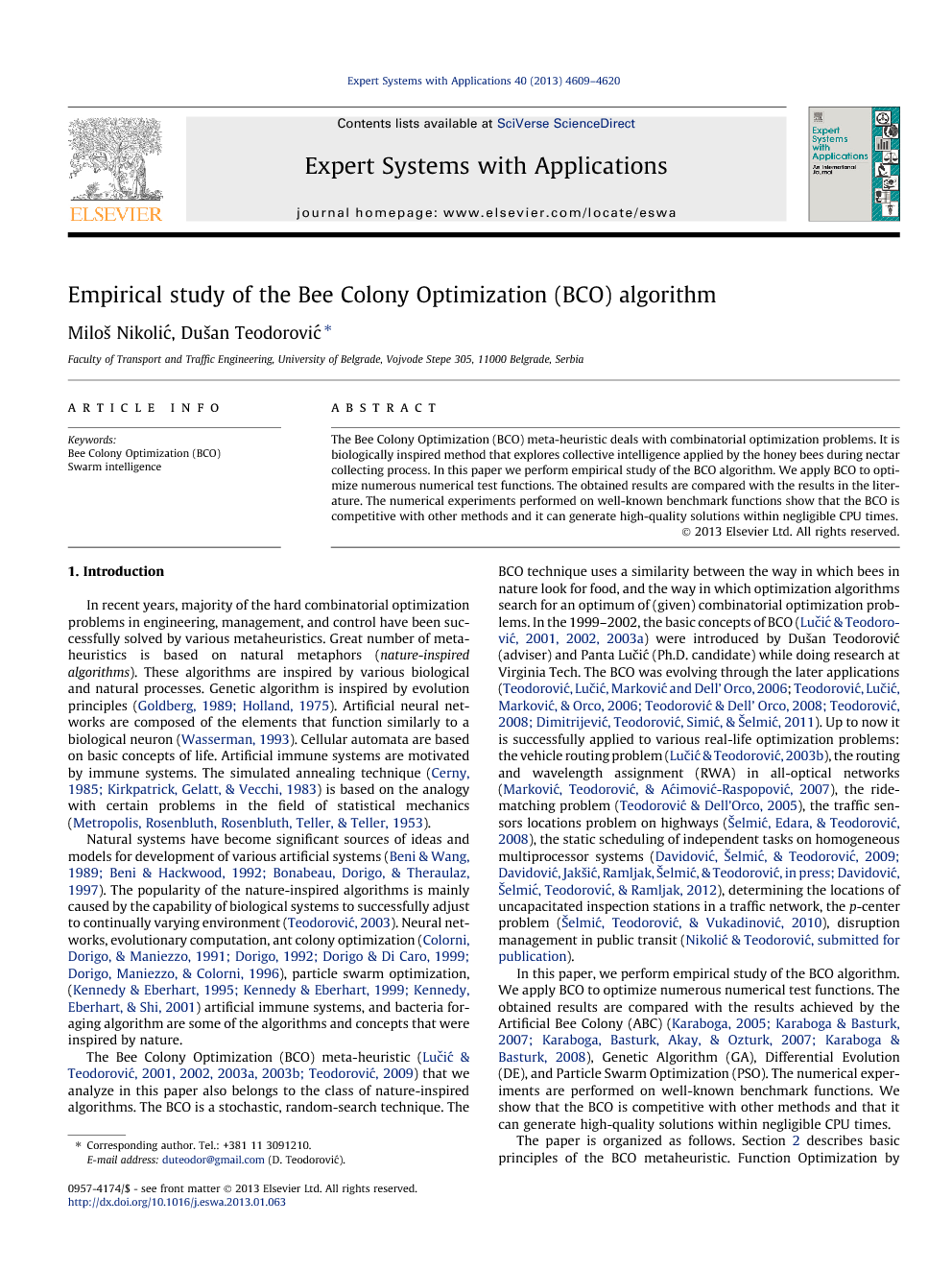 The Bee Colony Optimization (BCO) meta-heuristic deals with combinatorial optimization problems. It is biologically inspired method that explores collective intelligence applied by the honey bees during nectar collecting process. In this paper we perform empirical study of the BCO algorithm. We apply BCO to optimize numerous numerical test functions. The obtained results are compared with the results in the literature. The numerical experiments performed on well-known benchmark functions show that the BCO is competitive with other methods and it can generate high-quality solutions within negligible CPU times.

In recent years, majority of the hard combinatorial optimization problems in engineering, management, and control have been successfully solved by various metaheuristics. Great number of metaheuristics is based on natural metaphors (nature-inspired algorithms). These algorithms are inspired by various biological and natural processes. Genetic algorithm is inspired by evolution principles ( Goldberg, 1989 and Holland, 1975). Artificial neural networks are composed of the elements that function similarly to a biological neuron (Wasserman, 1993). Cellular automata are based on basic concepts of life. Artificial immune systems are motivated by immune systems. The simulated annealing technique ( Cerny, 1985 and Kirkpatrick et al., 1983) is based on the analogy with certain problems in the field of statistical mechanics (Metropolis, Rosenbluth, Rosenbluth, Teller, & Teller, 1953). Natural systems have become significant sources of ideas and models for development of various artificial systems (Beni and Wang, 1989, Beni and Hackwood, 1992 and Bonabeau et al., 1997). The popularity of the nature-inspired algorithms is mainly caused by the capability of biological systems to successfully adjust to continually varying environment (Teodorović, 2003). Neural networks, evolutionary computation, ant colony optimization (Colorni et al., 1991, Dorigo, 1992, Dorigo and Di Caro, 1999 and Dorigo et al., 1996), particle swarm optimization, (Kennedy and Eberhart, 1995, Kennedy and Eberhart, 1999 and Kennedy et al., 2001) artificial immune systems, and bacteria foraging algorithm are some of the algorithms and concepts that were inspired by nature. The Bee Colony Optimization (BCO) meta-heuristic (Lučić and Teodorović, 2001, Lučić and Teodorović, 2002, Lučić and Teodorović, 2003a, Lučić and Teodorović, 2003b and Teodorović, 2009) that we analyze in this paper also belongs to the class of nature-inspired algorithms. The BCO is a stochastic, random-search technique. The BCO technique uses a similarity between the way in which bees in nature look for food, and the way in which optimization algorithms search for an optimum of (given) combinatorial optimization problems. In the 1999–2002, the basic concepts of BCO (Lučić and Teodorović, 2001, Lučić and Teodorović, 2002 and Lučić and Teodorović, 2003a) were introduced by Dušan Teodorović (adviser) and Panta Lučić (Ph.D. candidate) while doing research at Virginia Tech. The BCO was evolving through the later applications (Teodorović, Lučić, Marković and Dell’ Orco, 2006; Teodorović et al., 2006, Teodorović and Dell’ Orco, 2008, Teodorović, 2008 and Dimitrijević et al., 2011). Up to now it is successfully applied to various real-life optimization problems: the vehicle routing problem (Lučić & Teodorović, 2003b), the routing and wavelength assignment (RWA) in all-optical networks (Marković, Teodorović, & Aćimović-Raspopović, 2007), the ride-matching problem (Teodorović & Dell’Orco, 2005), the traffic sensors locations problem on highways (Šelmić, Edara, & Teodorović, 2008), the static scheduling of independent tasks on homogeneous multiprocessor systems (Davidović et al., 2009, Davidović et al., in press and Davidović et al., 2012), determining the locations of uncapacitated inspection stations in a traffic network, the p-center problem (Šelmić, Teodorović, & Vukadinović, 2010), disruption management in public transit (Nikolić & Teodorović, submitted for publication). In this paper, we perform empirical study of the BCO algorithm. We apply BCO to optimize numerous numerical test functions. The obtained results are compared with the results achieved by the Artificial Bee Colony (ABC) (Karaboga, 2005, Karaboga and Basturk, 2007, Karaboga et al., 2007 and Karaboga and Basturk, 2008), Genetic Algorithm (GA), Differential Evolution (DE), and Particle Swarm Optimization (PSO). The numerical experiments are performed on well-known benchmark functions. We show that the BCO is competitive with other methods and that it can generate high-quality solutions within negligible CPU times. The paper is organized as follows. Section 2 describes basic principles of the BCO metaheuristic. Function Optimization by BCO is described in Section 3. Results of experiments are given in Section 4. Section 5 contains conclusion.

We performed an empirical study of the BCO algorithm. We apply BCO to optimize numerous numerical test functions. In this paper the BCO worked as an improving algorithm. We generated our initial solutions in a random manner, and by perturbing solutions, artificial bees improved them. The obtained results are compared with the results achieved by the Artificial Bee Colony, Genetic Algorithm, Differential Evolution, and Particle Swarm Optimization. The numerical experiments performed on well-known benchmark functions show that the BCO is competitive with other methods and it can generate high-quality solutions within negligible CPU times. The BCO has already been effectively applied to some combinatorial optimization problems. Theoretical results supporting BCO concepts are still absent. This work is crucial in the future research. Based on the achieved results and gained experience, new models founded on BCO principles (autonomy, distributed functioning, self-organizing) are likely to considerably contribute to solving complex engineering, management, and control problems.