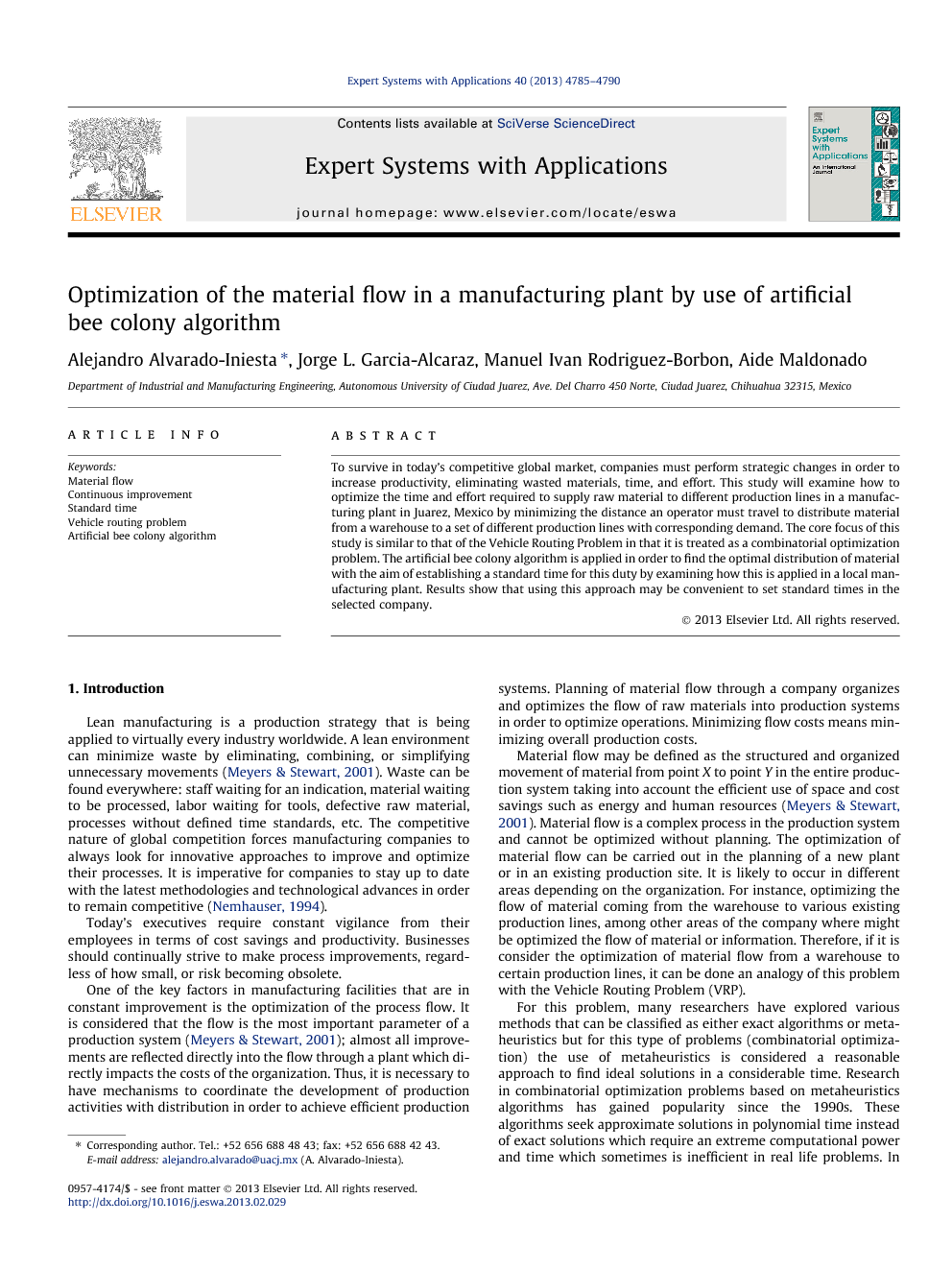 To survive in today’s competitive global market, companies must perform strategic changes in order to increase productivity, eliminating wasted materials, time, and effort. This study will examine how to optimize the time and effort required to supply raw material to different production lines in a manufacturing plant in Juarez, Mexico by minimizing the distance an operator must travel to distribute material from a warehouse to a set of different production lines with corresponding demand. The core focus of this study is similar to that of the Vehicle Routing Problem in that it is treated as a combinatorial optimization problem. The artificial bee colony algorithm is applied in order to find the optimal distribution of material with the aim of establishing a standard time for this duty by examining how this is applied in a local manufacturing plant. Results show that using this approach may be convenient to set standard times in the selected company.

Lean manufacturing is a production strategy that is being applied to virtually every industry worldwide. A lean environment can minimize waste by eliminating, combining, or simplifying unnecessary movements (Meyers & Stewart, 2001). Waste can be found everywhere: staff waiting for an indication, material waiting to be processed, labor waiting for tools, defective raw material, processes without defined time standards, etc. The competitive nature of global competition forces manufacturing companies to always look for innovative approaches to improve and optimize their processes. It is imperative for companies to stay up to date with the latest methodologies and technological advances in order to remain competitive (Nemhauser, 1994). Today’s executives require constant vigilance from their employees in terms of cost savings and productivity. Businesses should continually strive to make process improvements, regardless of how small, or risk becoming obsolete. One of the key factors in manufacturing facilities that are in constant improvement is the optimization of the process flow. It is considered that the flow is the most important parameter of a production system (Meyers & Stewart, 2001); almost all improvements are reflected directly into the flow through a plant which directly impacts the costs of the organization. Thus, it is necessary to have mechanisms to coordinate the development of production activities with distribution in order to achieve efficient production systems. Planning of material flow through a company organizes and optimizes the flow of raw materials into production systems in order to optimize operations. Minimizing flow costs means minimizing overall production costs. Material flow may be defined as the structured and organized movement of material from point X to point Y in the entire production system taking into account the efficient use of space and cost savings such as energy and human resources (Meyers & Stewart, 2001). Material flow is a complex process in the production system and cannot be optimized without planning. The optimization of material flow can be carried out in the planning of a new plant or in an existing production site. It is likely to occur in different areas depending on the organization. For instance, optimizing the flow of material coming from the warehouse to various existing production lines, among other areas of the company where might be optimized the flow of material or information. Therefore, if it is consider the optimization of material flow from a warehouse to certain production lines, it can be done an analogy of this problem with the Vehicle Routing Problem (VRP). For this problem, many researchers have explored various methods that can be classified as either exact algorithms or metaheuristics but for this type of problems (combinatorial optimization) the use of metaheuristics is considered a reasonable approach to find ideal solutions in a considerable time. Research in combinatorial optimization problems based on metaheuristics algorithms has gained popularity since the 1990s. These algorithms seek approximate solutions in polynomial time instead of exact solutions which require an extreme computational power and time which sometimes is inefficient in real life problems. In order to find the solution of the VRP, a large variety of algorithms have been applied such as Tabu search (Gendreau et al., 1994, Osman, 1993 and Tang-Montane and Dieguez-Galvao, 2006), Simulated Annealing (Chiang and Russell, 1996, Van Breedam, 1995 and Woch and Lebkowski, 2009), Genetic Algorithms (Baker and Ayechew, 2003, Berger and Barkaoui, 2003, Daza et al., 2009, Ombuki et al., 2006, Prins, 2004 and Torres et al., 2011), and Swarm intelligence algorithms (Bell and McMullen, 2004, Marinakis et al., 2011, Ai and Kachitvichyanukul, 2009, Ding et al., 2012, Kanthavel and Prasad, 2011, Shen et al., 2009, Tan et al., 2012, Venkatesan et al., 2011 and Yu et al., 2009). While the above metaheuristics have been used widely and successfully applied to the VRP, Artificial Bee colony (ABC) algorithm (part of the swarm intelligence algorithms) is a fairly new approach which was introduced few years ago by Dervis Karaboga (2005). When it was applied to similar problems it has been found to produce excellent results as well as reducing computational time (Bhagade and Puranik, 2012, Brajevic, 2011, Ji and Wu, 2011, Shi et al., 2012 and Szeto et al., 2011). The main objective of this study is twofold: first, to plan the material flow in order to establish a standard time by implementing the Artificial Bee Colony algorithm since the material leaves the warehouse and it is distributed to each production line. This is carried out within a manufacturing plant located in Ciudad Juarez, Chihuahua, Mexico. Second, as it was stated above, not only new technologies have emerged recently but also new algorithms have arisen. Thus, there is a question every manufacturing plant in Mexico should ask themselves: is it necessary to start to invest in new methodologies, and not only in advanced manufacturing technologies, in order to improve productivity? The answer to this question is straightforward: Yes. Many companies around the world are developing and implementing techniques such as heuristics, however this type of approaches seem far away in this region of the country (Juarez, Mexico), which is one of the primary manufacturing zones in the country. It is important to mention that this sector (Juarez), represents 50% of the exports of the manufacturing automotive sector in Mexico and the assembly plants association AMAC (Asociación de maquiladoras A.C.) has in its records 352 enterprises as members in different areas, this data indicates the economic importance of this region (INEGI, 2010). Therefore, this work might help to demonstrate that it is time to evolve to different approaches than the typical ones implemented so far, specifically in the industry located in Juarez, Chihuahua, Mexico. This paper is distributed as follows: Section 2 presents a brief background about VRP and ABC based on codification of permutations. Section 3 presents an experimental case applied to a manufacturing plant in Ciudad Juarez Mexico. The final section provides the corresponding conclusions.

Modern companies must continually strive for process improvement regardless of the scope to maintain a competitive advantage in today’s world... The purpose of this paper was to show how an application of the classical VRP could be applied to provide such an advantage by establishing a standard time for delivering raw material from a warehouse to various production lines. This idea was implemented in a manufacturing plant located in Ciudad Juarez, Mexico. By successfully establishing standard times, the use of human capital was used in an optimal manner. Closely examining the material flow, one can determine not only when an operator should be back at the warehouse for the next duty cycle but also the specific number of personnel required. At this point, a route can be determined for delivery of raw material. While this route may not be the optimal solution in terms of the traveled distance it acts as a starting point for developing a lean environment by optimization of the material flow. Furthermore, this paper shows how manufacturing plants in Juarez, Mexico have begun to implement techniques as heuristics in their systems with the aim of improving productivity. It is essential to clarify that these techniques should not substitute the current methods if they are working properly. In conclusion, it is important to keep in mind in that there are viable alternatives to the current methods used which could provide increased benefit to the manufacturing sector in Mexico.