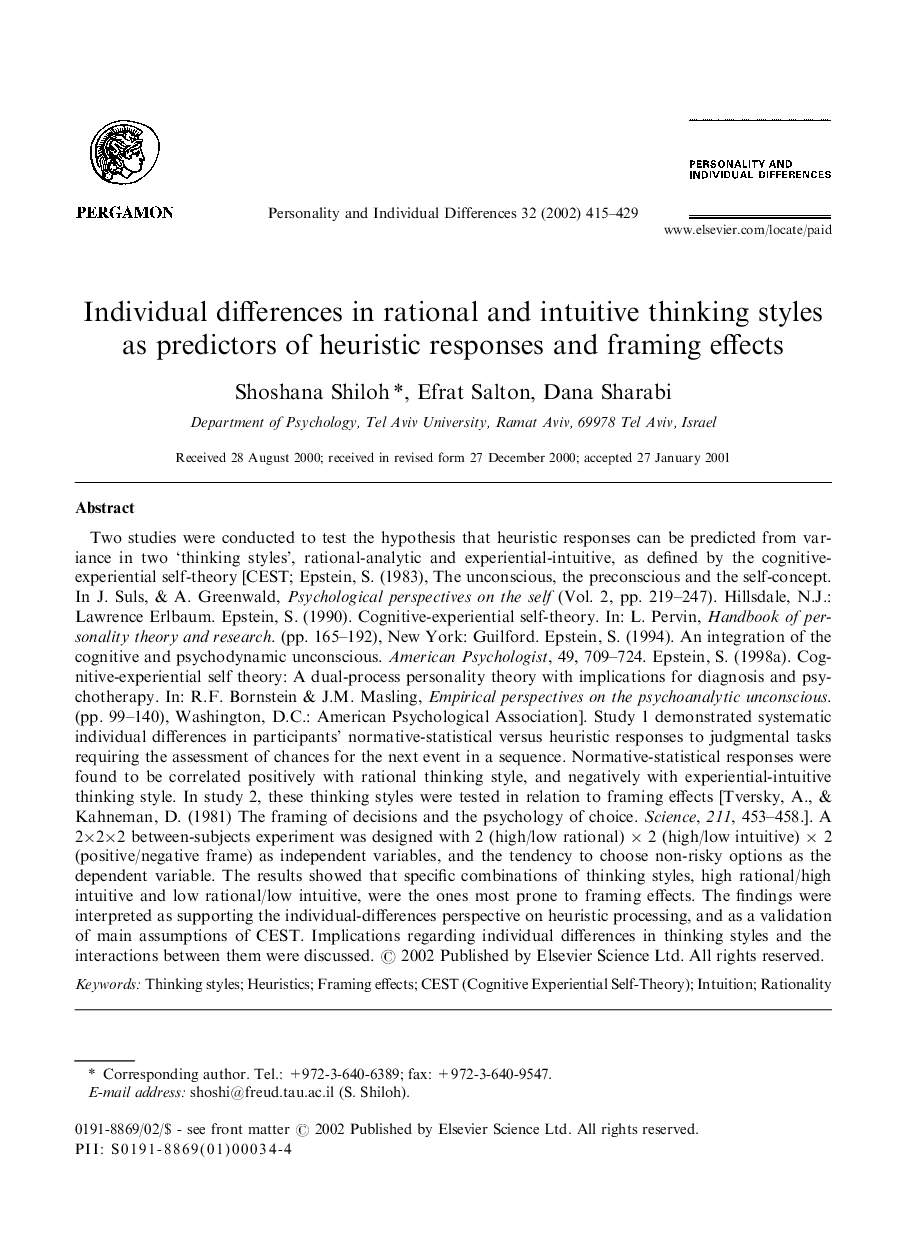 Two studies were conducted to test the hypothesis that heuristic responses can be predicted from variance in two ‘thinking styles', rational-analytic and experiential-intuitive, as defined by the cognitive-experiential self-theory [CEST; Epstein, S. (1983), The unconscious, the preconscious and the self-concept. In J. Suls, & A. Greenwald, Psychological perspectives on the self (Vol. 2, pp. 219–247). Hillsdale, N.J.: Lawrence Erlbaum. Epstein, S. (1990). Cognitive-experiential self-theory. In: L. Pervin, Handbook of personality theory and research. (pp. 165–192), New York: Guilford. Epstein, S. (1994). An integration of the cognitive and psychodynamic unconscious. American Psychologist, 49, 709–724. Epstein, S. (1998a). Cognitive-experiential self theory: A dual-process personality theory with implications for diagnosis and psychotherapy. In: R.F. Bornstein & J.M. Masling, Empirical perspectives on the psychoanalytic unconscious. (pp. 99–140), Washington, D.C.: American Psychological Association]. Study 1 demonstrated systematic individual differences in participants' normative-statistical versus heuristic responses to judgmental tasks requiring the assessment of chances for the next event in a sequence. Normative-statistical responses were found to be correlated positively with rational thinking style, and negatively with experiential-intuitive thinking style. In study 2, these thinking styles were tested in relation to framing effects [ Tversky, A., & Kahneman, D. (1981) The framing of decisions and the psychology of choice. Science, 211, 453–458.]. A 2×2×2 between-subjects experiment was designed with 2 (high/low rational) × 2 (high/low intuitive) × 2 (positive/negative frame) as independent variables, and the tendency to choose non-risky options as the dependent variable. The results showed that specific combinations of thinking styles, high rational/high intuitive and low rational/low intuitive, were the ones most prone to framing effects. The findings were interpreted as supporting the individual-differences perspective on heuristic processing, and as a validation of main assumptions of CEST. Implications regarding individual differences in thinking styles and the interactions between them were discussed.