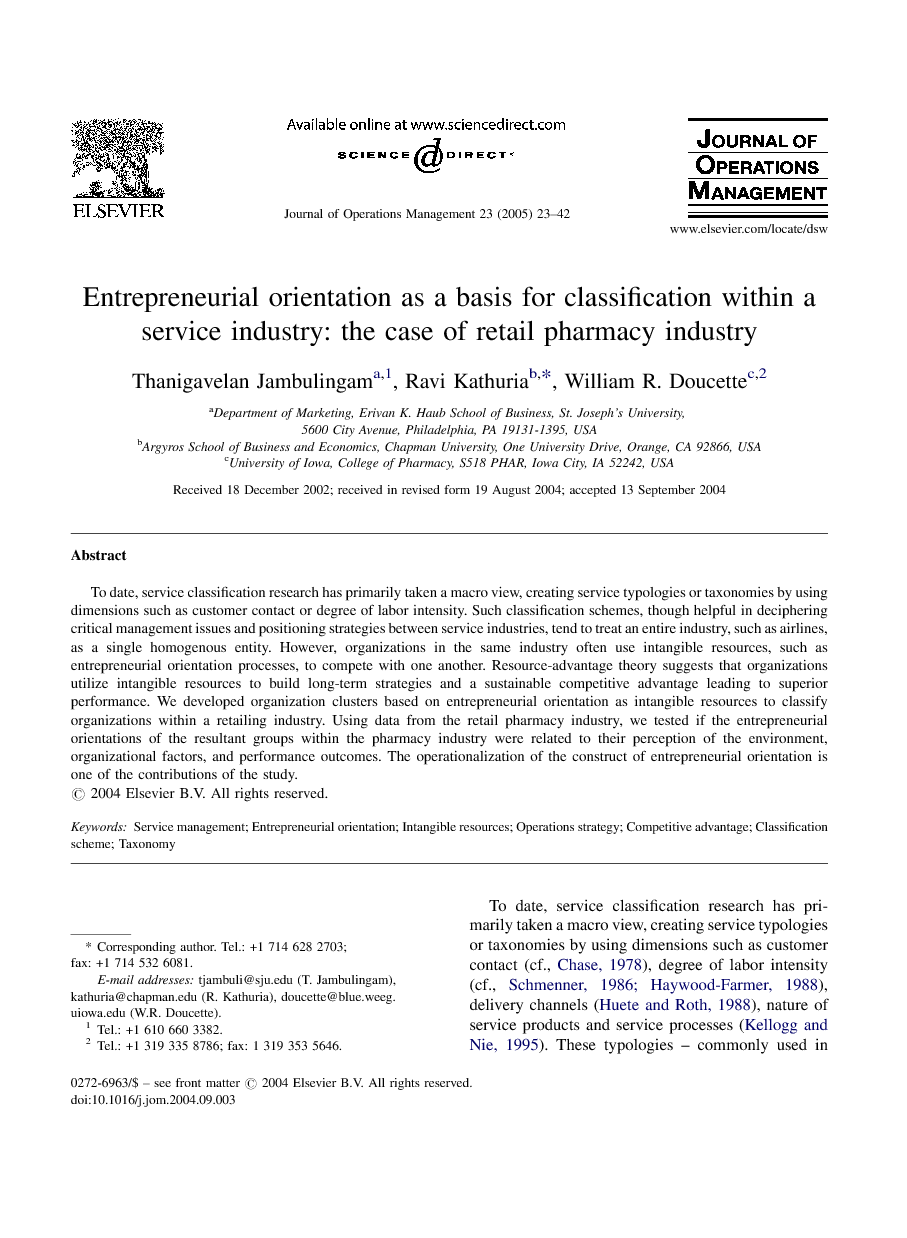 If we were to use earlier classification schemes, such as Chase (1978), we would classify all pharmacies as service shops. The popular literature, however, classifies retail pharmacies based upon the number of stores and type of merchandise sold. For example, “independent pharmacies” have less than four stores and “small chain” pharmacies have four to ten stores under a chain. “Large chains” are comprised of more than ten stores. “Food and drug combos,” are food stores with an in-house pharmacy, such as Kroger and Pathmark. “Mass merchandisers,” are retail stores with pharmacies, such as Kmart. These pharmacies utilize different combinations of resources to compete through variations in services. The results of a consumer survey lend support to the above-mentioned argument that different types of pharmacies (independents, mass merchandise, food and drug chains) use different competitive priorities: service level, information, and speed (Consumer reports, 1999). Their ratings indicated that the independents, in general, provide a high level of service (pharmacists courteous, helpful, and accessible) and at a faster speed (without delays) compared to most large chain pharmacies, food and drug stores, and mass merchandisers. But, one large chain, medicine shoppe (1200 stores nationwide) was found to be as good a service provider, and came very close on the speed of service to the independents. Thus, differences may exist not only across sub-groups within an industry (e.g., independents versus mass merchandisers), but within the subgroups in that industry. This points to the need for a means of classifying service providers more effectively. It is apparent that retail pharmacies utilize a variety of long-term strategies (i.e. intangible resources) to stay competitive over time. Some pharmacies develop combinations of intangible resources that can create services that add to their competitive position. Rather than a traditional scheme to classify such an industry, we propose a system based on combinations of intangible resources.

This study utilized concepts from resource-advantage theory to develop a taxonomy for service providers based on the pharmacies’ ability to gather and use combinations of entrepreneurial activities such as innovativeness, proactiveness, risk-taking, motivation, autonomy, and competitive aggressiveness. Analysis revealed that the resultant six groups of pharmacies, regardless of their traditional “type” classification, adopted different mixes of entrepreneurial orientation as intangible resources. An organization's emphasis on these resources is indicative of its strategies to develop and sustain a competitive advantage in the long run. Further, organizations across these six groups seem to perceive the growth opportunities, competition within the industry, and environmental stability differently. The resultant groups also seem to perform better on measures consistent with their entrepreneurial orientation. For example, Competitive Aggressors, 13% of the sample, ascribe significantly higher emphasis to challenging their competitors to improve their own market position. The Ambitious group of pharmacies, with nine percent of the respondents, places a high emphasis on enhancing its employees’ attitude and morality toward work. Favorable attitudes toward and moral belief in hard work are expected to contribute to employees’ motivation toward achieving strategic goals of the company. Their effectiveness in meeting organizational performance objectives and goals is better or equal to three other groups in the industry. The second biggest cluster (71 Proactive-Innovator pharmacies), 28% of the sample, gives significantly high importance to anticipating and acting on future needs. Such proactive behavior helps them engage in and support new ideas, novelty experimentation, and creative processes before their competitors. Their perception of industry-related environmental stability is quite low. Consistent with their orientation, they seem to proactively seek out what their customers want and provide services that meet customers’ needs. No wonder, their performance on customer orientation and the number of innovative services provided is better or equal to three of the other five groups in the industry. The biggest group, 76 True Entrepreneurs, represented 30% of the sample. Organizations of this type place a simultaneously high emphasis on all six entrepreneurial characteristics, which is in excess of 5.3 on a scale of 1–7. This group perceives high growth opportunities in the industry and goes all out to exploit it to stay ahead of the competitors. This is evidenced through their significantly high performance on customer orientation, which means that their success comes from meeting their customers’ needs. Consistent with their entrepreneurial orientation, they also offer the highest number of innovative services. The Low-Risk Entrepreneurs, 15% of the sample, is very similar to the True Entrepreneurs, but with a significantly low risk propensity. Consistent with their orientation, they perceive the competition in the industry to be extreme and have a relatively low tolerance for ambiguity. These organizations have oriented their strategy toward innovation, but are unwilling or unable to take the risks associated with full entrepreneurship. This approach, given their environments, makes them significantly more effective in consistently meeting their organizational performance goals and objectives as compared to their competitors in the industry. Consistent with their entrepreneurial spirit, they provide significantly higher number of innovative services compared to three other groups, but not significantly lower than their counterparts in the True Entrepreneurs and the Proactive Innovators groups. The smallest group, with five percent of the respondents, was the Anything but Entrepreneurs. Nearly half the pharmacies in this group are the Food & Drug Combination stores, also known as the supermarket pharmacies. Their perception of the competition in the industry is quite high, yet they seem to do nothing about it in terms of developing strategies to counter that. Consistently they are least effective in meeting their performance objectives, are less oriented to meeting their customers’ needs, and provide the least number of innovative pharmacy services. Our taxonomy is consistent with the strategic typology proposed by Miles et al. (1978) in some ways. On the degree of innovativeness, proactiveness, and risk propensity, our True Entrepreneurs would parallel their Prospectors. Both also possess the characteristics of adaptability and favor an organic structure. Our Anything but Entrepreneurs group could be viewed as their Defenders, both are the least adaptable and favor a mechanistic structure. Their Analyzers would be our risk minimizers, the groups of Low-risk Entrepreneurs, Ambitious, and Competitive Aggressors. Although we developed an empirical taxonomy within a service industry and Miles and Snow developed a general typology applicable across industries, there are similarities as noted above. Also, their typology was based on the then existing literature and studies in four service industries, including health care.