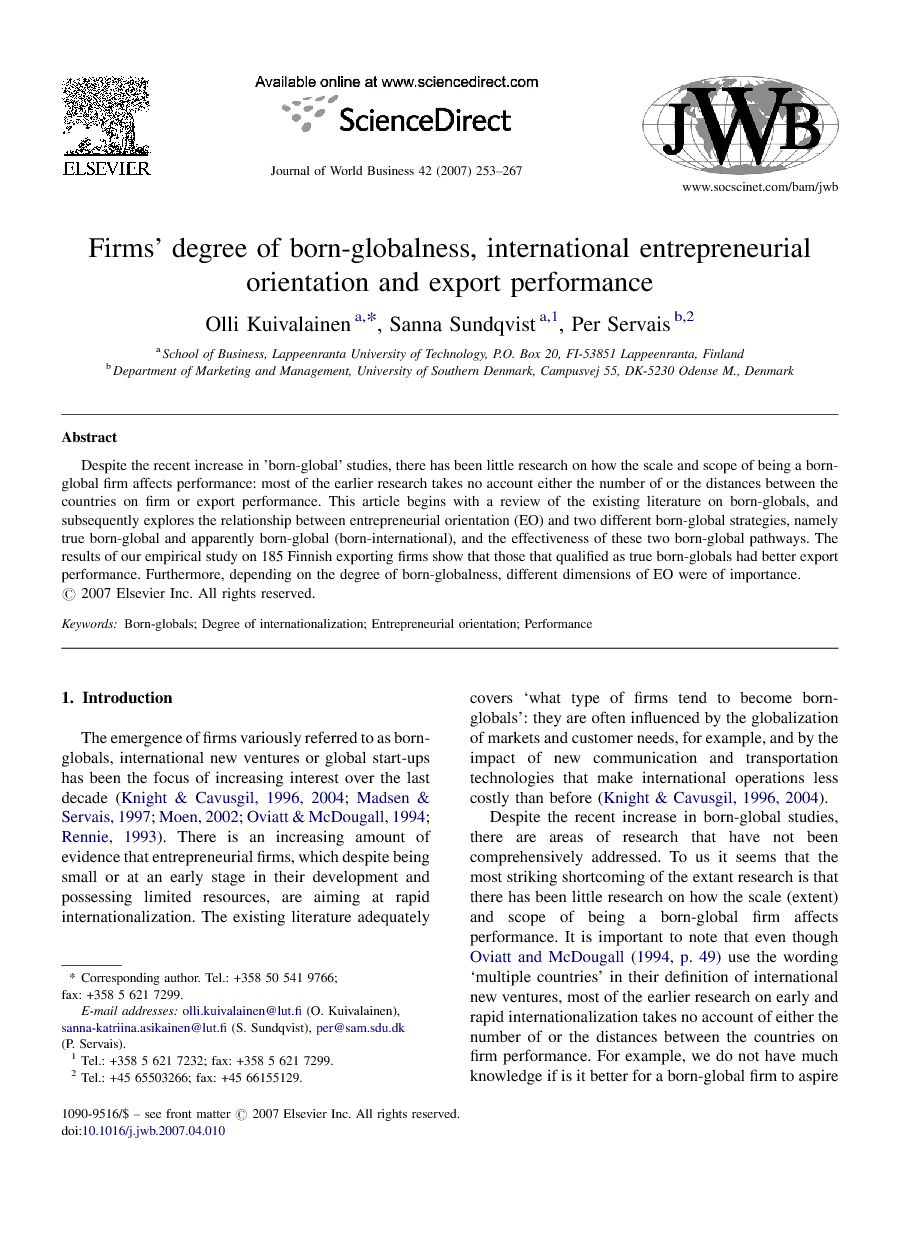 Despite the recent increase in ’born-global’ studies, there has been little research on how the scale and scope of being a born-global firm affects performance: most of the earlier research takes no account either the number of or the distances between the countries on firm or export performance. This article begins with a review of the existing literature on born-globals, and subsequently explores the relationship between entrepreneurial orientation (EO) and two different born-global strategies, namely true born-global and apparently born-global (born-international), and the effectiveness of these two born-global pathways. The results of our empirical study on 185 Finnish exporting firms show that those that qualified as true born-globals had better export performance. Furthermore, depending on the degree of born-globalness, different dimensions of EO were of importance.

The emergence of firms variously referred to as born-globals, international new ventures or global start-ups has been the focus of increasing interest over the last decade (Knight and Cavusgil, 1996 and Knight and Cavusgil, 2004; Madsen & Servais, 1997; Moen, 2002; Oviatt & McDougall, 1994; Rennie, 1993). There is an increasing amount of evidence that entrepreneurial firms, which despite being small or at an early stage in their development and possessing limited resources, are aiming at rapid internationalization. The existing literature adequately covers ‘what type of firms tend to become born-globals’: they are often influenced by the globalization of markets and customer needs, for example, and by the impact of new communication and transportation technologies that make international operations less costly than before (Knight and Cavusgil, 1996 and Knight and Cavusgil, 2004). Despite the recent increase in born-global studies, there are areas of research that have not been comprehensively addressed. To us it seems that the most striking shortcoming of the extant research is that there has been little research on how the scale (extent) and scope of being a born-global firm affects performance. It is important to note that even though Oviatt and McDougall (1994, p. 49) use the wording ‘multiple countries’ in their definition of international new ventures, most of the earlier research on early and rapid internationalization takes no account of either the number of or the distances between the countries on firm performance. For example, we do not have much knowledge if is it better for a born-global firm to aspire to go to multiple markets and distant markets or whether it is better to focus and stay closer at home. One of the main reasons for this unanticipated lack of research is the fact that there is no clear definition – neither theoretical nor empirical – of what it means to be a born-global firm (Rasmussen & Madsen, 2002). Another culprit may be that many authors have used the born-global criteria presented by Knight (1997) and Knight et al. (2004) as a basis for their large-scale empirical research. Researchers have defined a born-global firm by stating only that 25 percent of its total sales should come from exporting and it has to have internationalized within a few (most often three) years after its inception, the scope or the ‘market effect’ has been excluded or not analyzed thoroughly.3 Although we know that rapid internationalization from or near founding can yield positive returns, some of the findings are contradictory or ambiguous (for different results, see Aspelund & Moen, 2005; Autio, Sapienza, & Almeida, 2000; Bloodgood, Sapienza, & Almeida, 1996; McDougall & Oviatt, 1996; Zahra, Ireland, & Hitt, 2000). Part of this ambiguity in the relationship between internationalization of born-global firms and performance again stems from the conceptual confusion. It is not easy to distinguish what are the performance consequences of the internationalization strategy if firms which have been labeled as early internationalizing firms or born-globals differ from each other in many extant studies regarding scale and scope of their internationalization, the only common factor being the early internationalization. Zahra et al. (2000) studied ‘new ventures’ and used the following criteria in defining their sample: firms had to be less than six years old, and only 5 percent of their sales had to come from abroad. As these firms were young the actual mean of their measure for the number of foreign markets within the respondent firms was just above two (2.17). These criteria and accordingly the sample differ notably from the earlier mentioned criteria associated with Knight and his colleagues. For example, the respondent firms in the study conducted by Knight and Cavusgil (2004) targeted approximately 20 countries at the median and were notably larger and more mature than the firms in the sample of Zahra et al. (2000). An investigation focusing on the importance of scale and scope of internationalization among born-global firms is overdue. As a starting point, we define born-global firms as rapidly internationalized firms (within three years from the foundation) with a high share of foreign sales out of the total turnover (more than 25 percent). This definition is consistent with Knight et al. (2004). However, even this group of born-globals can include firms with different internationalization strategies depending on the level of the degree of internationalization (DOI) and markets served. Certain differences may exist among the antecedents or drivers of the chosen strategy among different types of born-global firms; it may be that the management of the firm which follows market diversification strategy is more entrepreneurially oriented, for example, as internationalization can be seen as an entrepreneurial activity per se (McNaughton, 2003; Zahra & George, 2002). We propose that there are differences not only between firms following the incremental ‘traditional internationalization pathway’ (Johanson & Vahlne, 1977) and born-globals which fulfill the above-mentioned criteria of Knight et al. (2004), but also between different types of born-global firms. Globality or globalness can be seen as a continuous variable (Govindarajan & Gupta, 2000); consequently, Servais, Madsen, and Rasmussen (2007). There are different types of born-globals according to their degree of involvement in international sourcing and selling activities. In this paper we will separate between those born-global firms following an ‘apparently born-global’, that is a ‘born-international pathway’ (exporting only to close markets with an export ratio close to the arbitrary 25% cut-off rate) and those on the ‘true born-global pathway’ (i.e. genuine born-globals operating in distant markets and multiple regions, fulfilling more or less the definition of the global firm, Levitt, 1983). These two born-global pathways can be seen as two different outcomes of born-global internationalization strategy and although their existence has been recognized (the typology of Oviatt & McDougall, 1994) the effectiveness of these paths remains largely un-researched. Our aim in this study is to fill this gap by studying differences among born-global firms regarding their entrepreneurial orientation (EO) and export performance. The focus is on mature born-global firms that have a track record of exporting over a number of years. In order to make a distinction between the two mentioned born-global pathways and subsequent strategies, we introduce the concept ‘degree of born-globalness’ (DBG).4 By this we mean the DOI of rapidly internationalizing firms, i.e. firms which have internationalized within three years from their foundation.