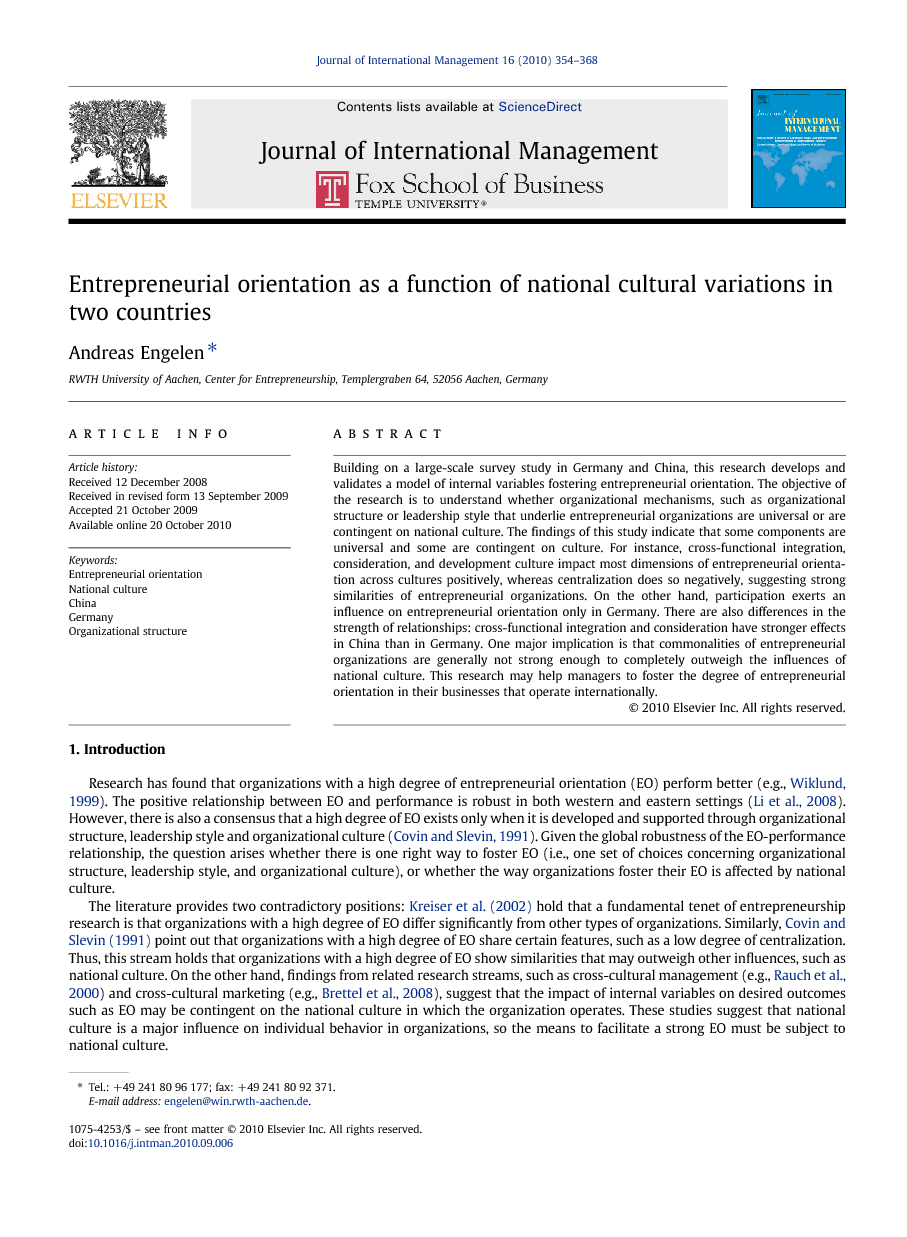 Research has found that organizations with a high degree of entrepreneurial orientation (EO) perform better (e.g., Wiklund, 1999). The positive relationship between EO and performance is robust in both western and eastern settings (Li et al., 2008). However, there is also a consensus that a high degree of EO exists only when it is developed and supported through organizational structure, leadership style and organizational culture (Covin and Slevin, 1991). Given the global robustness of the EO-performance relationship, the question arises whether there is one right way to foster EO (i.e., one set of choices concerning organizational structure, leadership style, and organizational culture), or whether the way organizations foster their EO is affected by national culture. The literature provides two contradictory positions: Kreiser et al. (2002) hold that a fundamental tenet of entrepreneurship research is that organizations with a high degree of EO differ significantly from other types of organizations. Similarly, Covin and Slevin (1991) point out that organizations with a high degree of EO share certain features, such as a low degree of centralization. Thus, this stream holds that organizations with a high degree of EO show similarities that may outweigh other influences, such as national culture. On the other hand, findings from related research streams, such as cross-cultural management (e.g., Rauch et al., 2000) and cross-cultural marketing (e.g., Brettel et al., 2008), suggest that the impact of internal variables on desired outcomes such as EO may be contingent on the national culture in which the organization operates. These studies suggest that national culture is a major influence on individual behavior in organizations, so the means to facilitate a strong EO must be subject to national culture. To resolve these contradictory positions, the present study develops and empirically tests a theoretical model which integrates the internal variables that support organizational EO, specifically organizational structure, leadership style, and organizational culture, with Hofstede's (1980) multidimensional framework of cultural dimensions. The theoretical analysis and survey-based empirical research are conducted from German and Chinese perspectives for three reasons: the two nations differ significantly on the two most important cultural dimensions of power distance and collectivism (Hofstede, 1980 and House et al., 2004); their two economies are major drivers of growth, with Germany as the most important European economy and China as one of the largest economies in the world with above-average growth (Quer et al., 2007); and both countries have in common that entrepreneurship has recently increased in importance. In Germany, entrepreneurial organizations have become a major topic because of the countries efforts to create a more “entrepreneurial society.” The German economy has traditionally been driven by large companies, but these large companies are no longer able to provide sufficient numbers of jobs; young, entrepreneurial organizations are the major job creators (Bergmann and Sternberg, 2007). In China, the government relaxed its grip on the economy in the late 1970s (Holt, 1997) and, by the end of the twentieth century, the number of private enterprises had passed the one million mark (Ahlstrom et al., 2007). Koveos and Tang (2007) point out that China's economic upturn is strongly rooted in people's enthusiasm for business creation and that the entrepreneurial spirit has even entered large Chinese “blue-chip” enterprises. In short, Germany and China are appropriate for a cultural comparison and merit attention because of their economic importance and emphasis on entrepreneurship. This study proceeds as follows: The next section lays out the theoretical premises. Hypotheses are generated in the following section. The fourth section presents the methodology of the analysis. The findings are presented in Section 5 and discussed in detail in Section 6.