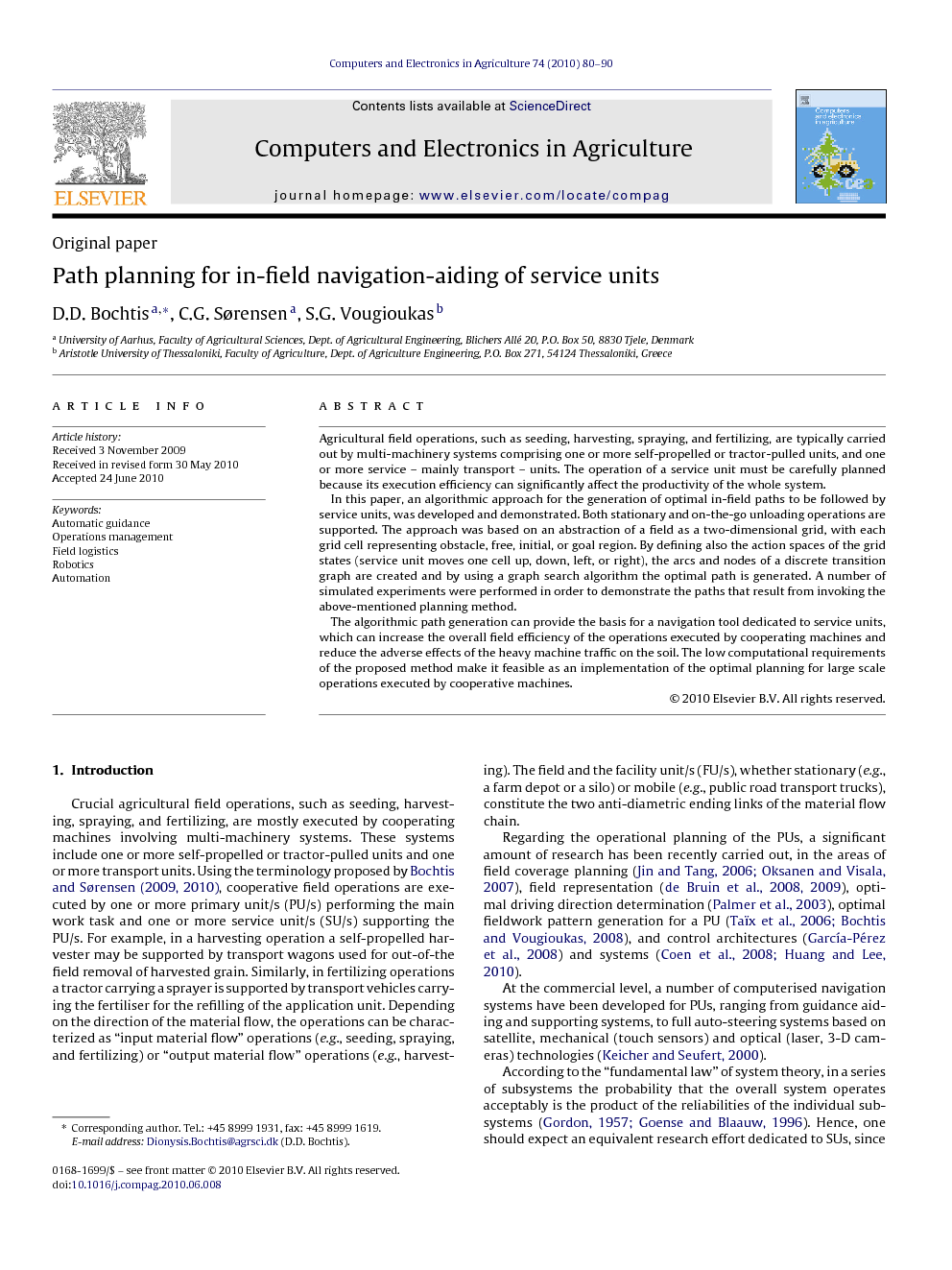 Agricultural field operations, such as seeding, harvesting, spraying, and fertilizing, are typically carried out by multi-machinery systems comprising one or more self-propelled or tractor-pulled units, and one or more service – mainly transport – units. The operation of a service unit must be carefully planned because its execution efficiency can significantly affect the productivity of the whole system. In this paper, an algorithmic approach for the generation of optimal in-field paths to be followed by service units, was developed and demonstrated. Both stationary and on-the-go unloading operations are supported. The approach was based on an abstraction of a field as a two-dimensional grid, with each grid cell representing obstacle, free, initial, or goal region. By defining also the action spaces of the grid states (service unit moves one cell up, down, left, or right), the arcs and nodes of a discrete transition graph are created and by using a graph search algorithm the optimal path is generated. A number of simulated experiments were performed in order to demonstrate the paths that result from invoking the above-mentioned planning method. The algorithmic path generation can provide the basis for a navigation tool dedicated to service units, which can increase the overall field efficiency of the operations executed by cooperating machines and reduce the adverse effects of the heavy machine traffic on the soil. The low computational requirements of the proposed method make it feasible as an implementation of the optimal planning for large scale operations executed by cooperative machines.

In this paper, an algorithmic approach for the generation of optimal in-field paths to be followed by SUs was developed and demonstrated. The approach was based on an abstraction of a field as a two-dimensional grid in which obstacle, free, initial and goal regions are defined. From the action spaces of the grid states, the nodes of the discrete transition graph are created and by using a graph search algorithm the optimal path is generated. The algorithmically based path generation can provide the basis for a navigation tool dedicated to SUs which can increase the overall field efficiency of the operations executed by cooperating machines and reduce the adverse effects of the heavy machine traffic on the soil. The optimised path generation limits in-effective in-field movements of SU machines as a result of non-optimal decisions and manoeuvring on behalf of the operators. This tool could also be suitable for CTF systems. The low computational requirements of the proposed method render it practical for optimal planning for large scale operations executed by cooperating teams of PUs and SUs. Finally, it can provide a point-to-point optimal path generation for future robotic SUs that can operate autonomously in the field.

Crucial agricultural field operations, such as seeding, harvesting, spraying, and fertilizing, are mostly executed by cooperating machines involving multi-machinery systems. These systems include one or more self-propelled or tractor-pulled units and one or more transport units. Using the terminology proposed by Bochtis and Sørensen, 2009 and Bochtis and Sørensen, 2010, cooperative field operations are executed by one or more primary unit/s (PU/s) performing the main work task and one or more service unit/s (SU/s) supporting the PU/s. For example, in a harvesting operation a self-propelled harvester may be supported by transport wagons used for out-of-the field removal of harvested grain. Similarly, in fertilizing operations a tractor carrying a sprayer is supported by transport vehicles carrying the fertiliser for the refilling of the application unit. Depending on the direction of the material flow, the operations can be characterized as “input material flow” operations (e.g., seeding, spraying, and fertilizing) or “output material flow” operations (e.g., harvesting). The field and the facility unit/s (FU/s), whether stationary (e.g., a farm depot or a silo) or mobile (e.g., public road transport trucks), constitute the two anti-diametric ending links of the material flow chain. Regarding the operational planning of the PUs, a significant amount of research has been recently carried out, in the areas of field coverage planning (Jin and Tang, 2006 and Oksanen and Visala, 2007), field representation (de Bruin et al., 2008 and de Bruin et al., 2009), optimal driving direction determination (Palmer et al., 2003), optimal fieldwork pattern generation for a PU (Taïx et al., 2006 and Bochtis and Vougioukas, 2008), and control architectures (García-Pérez et al., 2008) and systems (Coen et al., 2008 and Huang and Lee, 2010). At the commercial level, a number of computerised navigation systems have been developed for PUs, ranging from guidance aiding and supporting systems, to full auto-steering systems based on satellite, mechanical (touch sensors) and optical (laser, 3-D cameras) technologies (Keicher and Seufert, 2000). According to the “fundamental law” of system theory, in a series of subsystems the probability that the overall system operates acceptably is the product of the reliabilities of the individual subsystems (Gordon, 1957 and Goense and Blaauw, 1996). Hence, one should expect an equivalent research effort dedicated to SUs, since PUs and SUs constitute heterogeneous components operating in series within material-transport multi-machine systems. However, the research on SUs has concentrated on technical optimisation and coordination of PUs and SUs (e.g., Hao et al., 2003) and only limited and sparse research effort has addressed the operational planning for field SUs in combination with the PUs (e.g., Van Elderen and Kroeze, 1994). The planning and execution efficiency for a SU task can significantly affect the productivity of the whole system. For example, in grain harvesting the choice of a non-optimal route, in terms of time and distance travelled, for a transport wagon may cause a high-capacity combine to remain idle, while waiting to unload its fully loaded grain hopper. Furthermore, given that SUs usually carry material quantities that are multiple times greater than the tank capacities of the PUs, the planned routes have significant impact on soil compaction. Considering the current trend towards employing larger and larger machines (Kutzbach, 2000), the risk of soil compaction is increased even more. The usual strategy of increasing the contact area using, for example, tracks instead of wheels, or wheels with lowered air pressure is not sufficient for the mitigation of the problem (Hamza and Anderson, 2005). Such measures may reduce the compaction of the top soil but the subsoil must still carry the weight of the heavy machines (Blackmore, 2004). Furthermore, the use of tracks can have a number of detrimental effects, such as adverse soil displacement and soil density changes (Ansorge and Godwin, 2007). The implementation of controlled traffic farming (CTF) as a management system eliminates completely soil compaction within the cropped area because the machinery motion is constrained exclusively within the permanent parallel wheel tracks (Chamen et al., 2003). However, implementing CTF for material handling operations such as harvesting and fertilizing carried out by cooperating machines can reduce the operations’ efficiencies due to significant increases in idle time of in-field transports units (Bochtis et al., 2010). On the other hand, the perspective of introducing field robots should also be considered (Johnson et al., 2009). According to this perspective, large teams of smaller autonomous machines are to replace smaller groups of heavier machines as a way to build collective behavioural systems that are more economical, more scalable and less susceptible to overall malfunction (Sørensen et al., 2005 and Blackmore et al., 2007). In this case of cooperating field robots, managerial tasks such as route and mission planning are becoming increasingly important as integral parts of their high level control (Bochtis et al., 2009 and Sørensen and Bochtis, 2010). Consequently, optimisation approaches should be developed for the in-field service operations of SUs that can provide the optimal paths followed by SUs, in terms of criteria such as travelled distance, soil compaction, and minimization of the waiting time of PUs. Furthermore, the approaches should be able to constitute the basis of navigation-aiding or even auto-steering systems for conventional or robotic SUs. Here, an algorithmic approach for the generation of optimal in-field paths to be followed by SUs, is presented. Both stationary and on-the-go unloading operations are supported. The approach was based on an abstract representation of a field as a two-dimensional grid. Although the proposed approach is suitable for input as well as output material flow operations, harvesting was used as a reference throughout the study since it constitutes the main operation where in-field service of PUs takes place. Furthermore, the study will be oriented toward the case of CTF, or more generally, toward the invoking of traffic restrictions as a way to reduce soil compaction, since these cases are more challenging in terms of operational planning and execution.