عنوان انگلیسی
Will the decline of efficiency in China's agriculture come to an end? An analysis based on opening and convergence
دانلود فوری مقاله + سفارش ترجمه 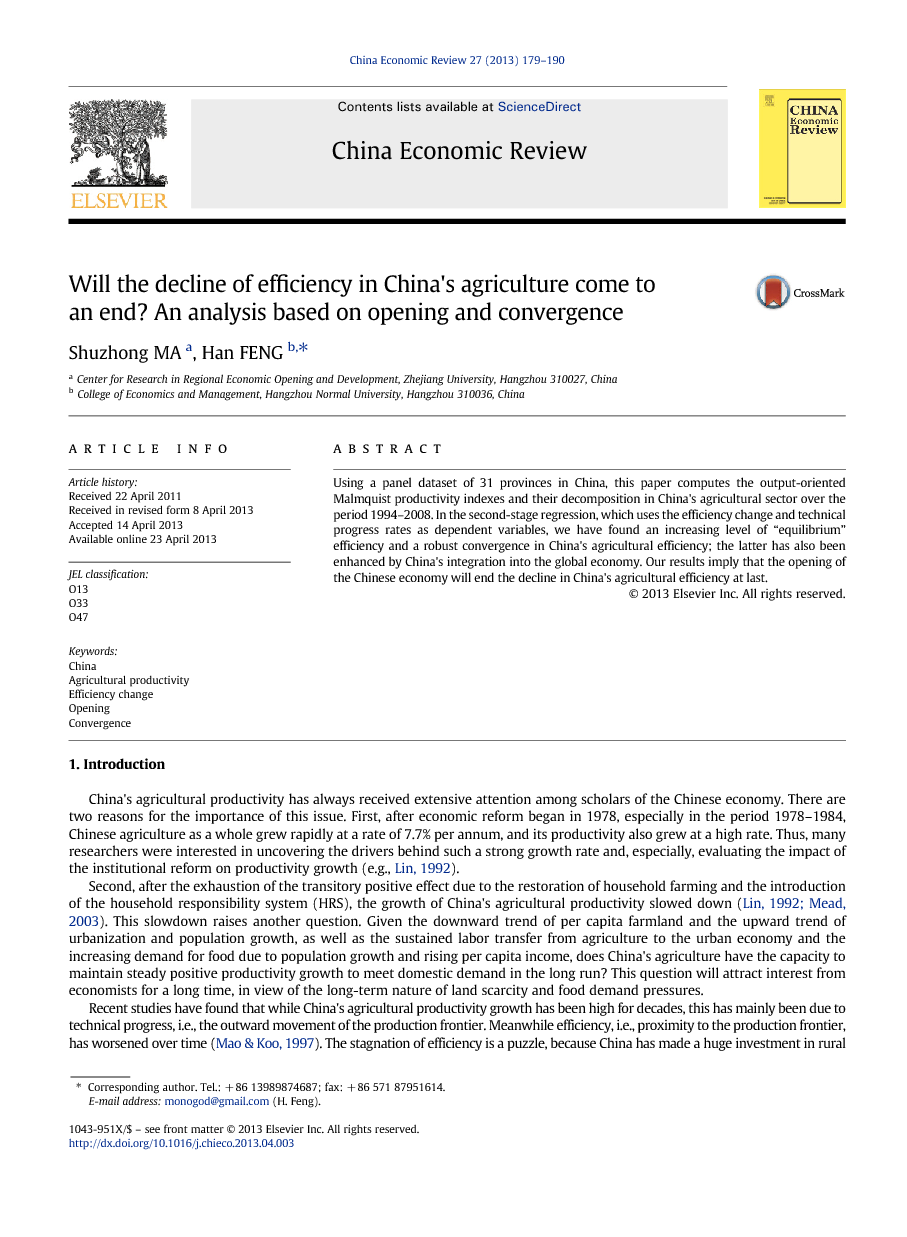 China's agricultural productivity has always received extensive attention among scholars of the Chinese economy. There are two reasons for the importance of this issue. First, after economic reform began in 1978, especially in the period 1978–1984, Chinese agriculture as a whole grew rapidly at a rate of 7.7% per annum, and its productivity also grew at a high rate. Thus, many researchers were interested in uncovering the drivers behind such a strong growth rate and, especially, evaluating the impact of the institutional reform on productivity growth (e.g., Lin, 1992). Second, after the exhaustion of the transitory positive effect due to the restoration of household farming and the introduction of the household responsibility system (HRS), the growth of China's agricultural productivity slowed down (Lin, 1992 and Mead, 2003). This slowdown raises another question. Given the downward trend of per capita farmland and the upward trend of urbanization and population growth, as well as the sustained labor transfer from agriculture to the urban economy and the increasing demand for food due to population growth and rising per capita income, does China's agriculture have the capacity to maintain steady positive productivity growth to meet domestic demand in the long run? This question will attract interest from economists for a long time, in view of the long-term nature of land scarcity and food demand pressures. Recent studies have found that while China's agricultural productivity growth has been high for decades, this has mainly been due to technical progress, i.e., the outward movement of the production frontier. Meanwhile efficiency, i.e., proximity to the production frontier, has worsened over time (Mao & Koo, 1997). The stagnation of efficiency is a puzzle, because China has made a huge investment in rural infrastructure, and agricultural commodity prices have been rising in recent years (Huang & Rozelle, 2006). It is also a serious matter: such stagnation will reduce the marginal benefit of R&D investment and the adoption of new farming techniques, retarding technical progress in the long run. In other words, efficiency stagnation may render China's agricultural productivity growth unsustainable. Over the past three decades, China has become more open to and integrated with the global economy, especially since the beginning of the 1990s. China has attracted a huge amount of FDI and has become the world's largest exporter of merchandise. The opening of the Chinese economy is reflected not only in the volume of FDI and foreign trade, improvement of transport and communication infrastructure and relaxing of institutional restraints such as the hukou system, but also in increasing population flows and information exchanges. Naturally, significant changes in the socioeconomic environment will have an impact on agricultural productivity growth. In contrast to remote and isolated regions, areas that are more open to the outside world will find it easy to exchange information with the rest of world, and will acquire new production technologies faster and at lower costs, thus reaping benefits of technical progress. They would also get detailed description of new technology easier, which may bring efficiency gains. This positive effect of information exchange may be particularly significant in China because the developers of new technologies tend to be separated from end users. Therefore, it is important to include the impact of opening the Chinese economy when studying China's agricultural productivity. In this paper, we review China's agricultural productivity evolution in the context of the opening of the Chinese economy, measure the impact of this opening on agricultural productivity, decompose it into technical progress and efficiency gain and, finally, address the issue of whether efficiency stagnation will soon end. Recently, much literature has focused on another concept that is similar to inefficiency used in our paper: misallocation. It will be helpful to compare these two concepts, and to explain why we talk about inefficiency instead of misallocation1. In our paper, inefficiency means that a production unit has not used its current technologies adequately. Misallocation means that inputs are not allocated to the most productive units of the economy (Restuccia & Rogerson, 2013). Despite the difference between the concepts, both talk about the influence of productivity besides technology: an efficiency improvement could bring about productivity growth without adoption of new, more productive technology, and a reallocation could reduce the extent of misallocation and improve economic productivity without changing the productivity of any specific production units. If we measure inefficiency at a macrolevel, e.g. provincial level as we did in this article, the relationship between inefficiency and misallocation could be even stronger: inefficiency of a specific unit could well be resulted from within misallocation of inputs, and its efficiency improvement could come from reallocation inside it. In a sense, an inefficiency problem is always a misallocation problem: inputs should be reallocated from low- to high-efficiency units. For this reason, misallocation maybe is the more fundamental one in those two concepts, but it also has its disadvantage. It is easy to reallocate inputs such as capital and labor between different firms or sectors, but it is hard, if not impossible, to reallocate inputs such as land between different provinces. The limits on land transfers may limit the gains from better allocation of inputs. Considering the importance of land for agriculture, these limits cannot be ignored. Thus, the perspective of misallocation seems inappropriate for this paper. For an inefficiency production unit such as a province as used in our paper, improvements in efficiency seem much more feasible than reallocating cultivated land to other units. This is particularly the case in China. Thus, we use the perspective of inefficiency. The remainder of the paper is organized as follows. The next section reviews the evolution of China's agricultural productivity after 1978, introduces the China's economic opening and discusses its impact on agricultural productivity growth—especially efficiency convergence. Section 3 briefly describes the methodology and data used in this paper. Section 4 presents and discusses our results. Section 5 ends with concluding remarks.