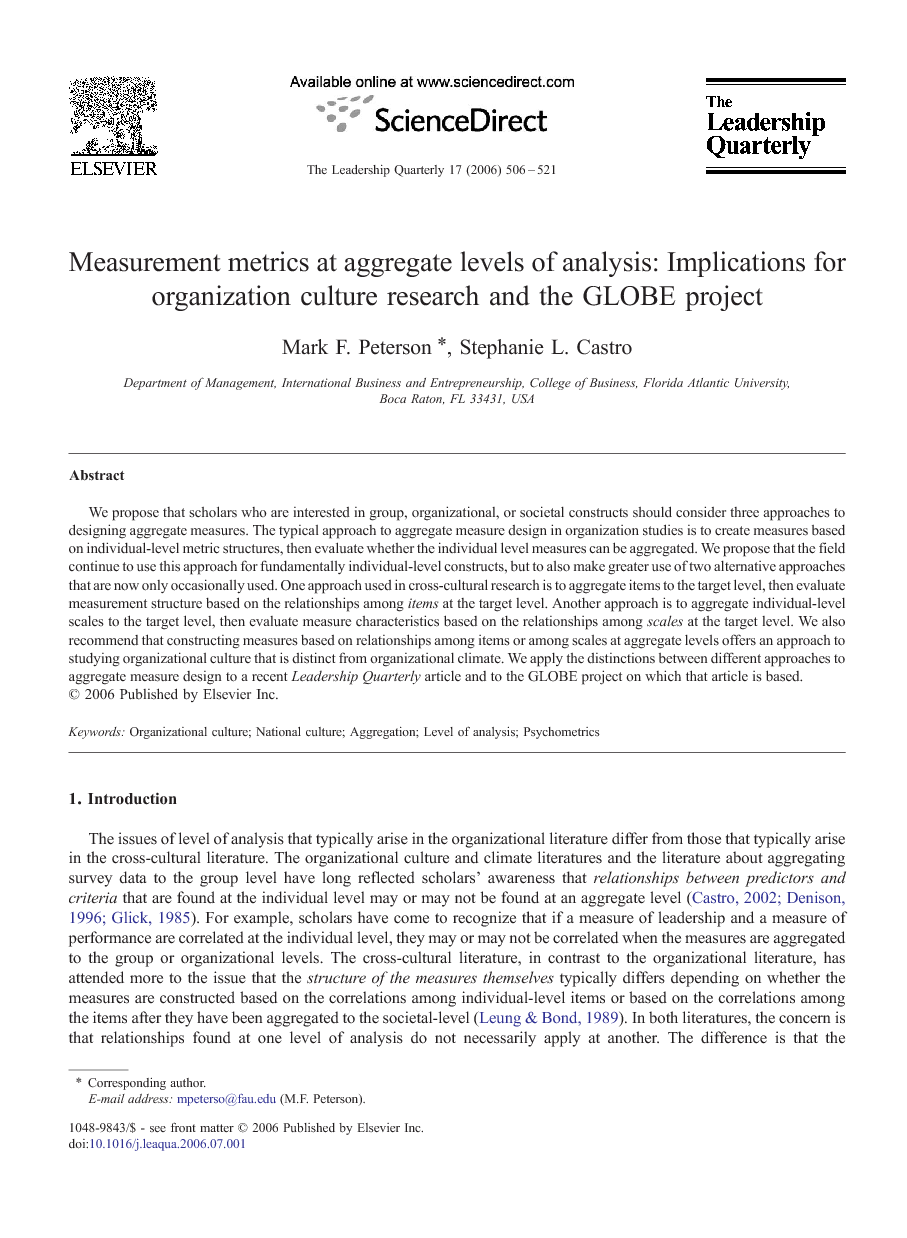 We propose that scholars who are interested in group, organizational, or societal constructs should consider three approaches to designing aggregate measures. The typical approach to aggregate measure design in organization studies is to create measures based on individual-level metric structures, then evaluate whether the individual level measures can be aggregated. We propose that the field continue to use this approach for fundamentally individual-level constructs, but to also make greater use of two alternative approaches that are now only occasionally used. One approach used in cross-cultural research is to aggregate items to the target level, then evaluate measurement structure based on the relationships among items at the target level. Another approach is to aggregate individual-level scales to the target level, then evaluate measure characteristics based on the relationships among scales at the target level. We also recommend that constructing measures based on relationships among items or among scales at aggregate levels offers an approach to studying organizational culture that is distinct from organizational climate. We apply the distinctions between different approaches to aggregate measure design to a recent Leadership Quarterly article and to the GLOBE project on which that article is based.

The present paper is intended to draw the attention of organizational behavior scholars and cross-cultural scholars to aggregation issues in each area that have relevance for the other. GLOBE is a particularly good example of the need to deal with both sets of issues. Organizational scholars working on projects with data from many organizations need to recognize that the level of analysis issues they have encountered when studying relationships between measures also apply to measure design. Organization culture scholars should consider the possibility that uniquely organization-level measures of organization culture might be developed that are different from averages of measures designed for individuals based on individual-level psychometrics. Scholars working on projects with data from many nations should attend more carefully to issues that organizational behavior scholars have addressed in aggregating individual level data before it is analyzed at the aggregate level. Doing so should help identify items that do not have the properties that are likely to let them contribute to measures created at the aggregate level. Given the modest number of aggregate data points (nations) in even the largest studies, eliminating items that should not be aggregated due to excessive individual-level variability may make it easier to successfully construct aggregate measures following the CAS approach. In order to accomplish these purposes, we suggest three approaches to creating aggregate measures and make recommendations about how different sorts of organizational research that aggregates data collected from individuals should progress. A caveat that applies to all research about aggregation is that some units may be culturally heterogeneous. Whether within-society variability makes it unreasonable to talk about national (or organizational) culture needs to be carefully considered if measures are designed based on society-level metric structures. It may well be that one organization, nation or society is too heterogeneous to include in a particular multiple nation analysis. Does that mean that organization-, nation- or society-level measures should not be constructed? No. That would be equivalent to the case where a particular individual shows too much complexity or instability for a measure of personality to apply. Neither the occasional heterogeneous society nor the complex or unstable individual invalidates a measure that is based on overall metrics at a particular level of analysis. Further, if the usual checks (ICCs, rwg, etc.) are conducted, they directly respond to the issue of possibly excessive within-unit heterogeneity that is frequently raised, but rarely directly addressed, in international comparative research. When evaluating whether aggregation is appropriate in cross cultural research, both the opportunity to collect large samples in each nation and the limitation that there will be considerable variability within a nation must be recognized. It is the large sample sizes and considerable variance between nations that is often found which make it possible to overcome the limitation of within-nation variability. The design of the GLOBE project on which the article and book that stimulated our analysis are based has unusual potential strengths that these publications have not yet exploited. In order to construct measures based on item interrelationships at the organization or nation level, a project needs to have data from many nations or organizations. Since organizational behavior scholars rarely have this sort of database, they are usually only able to consider a very limited aspect of data structures at these levels. Until other similar data bases are developed in which aggregation to both the organization and nation levels is possible, the field will await further leadership from the GLOBE scholars.