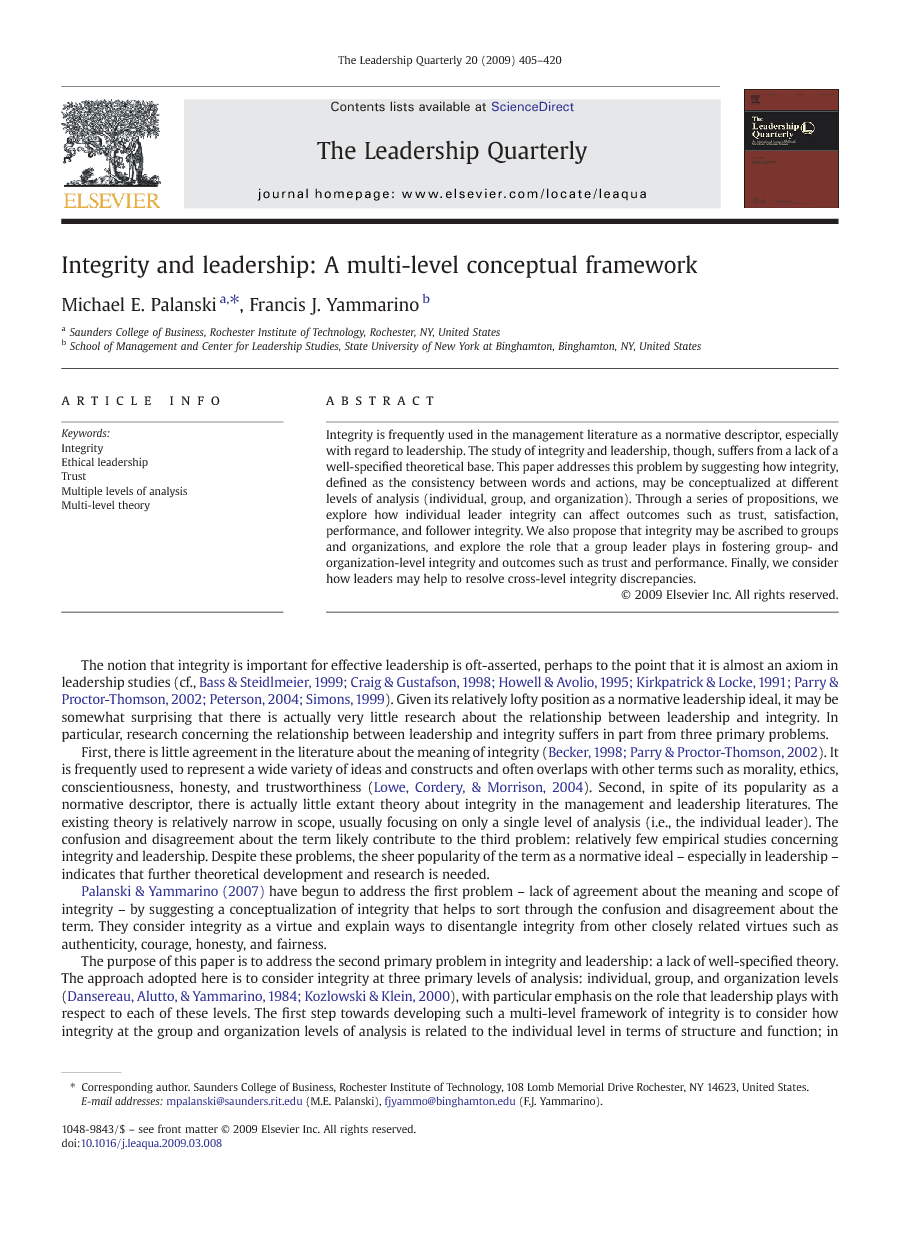 Integrity is frequently used in the management literature as a normative descriptor, especially with regard to leadership. The study of integrity and leadership, though, suffers from a lack of a well-specified theoretical base. This paper addresses this problem by suggesting how integrity, defined as the consistency between words and actions, may be conceptualized at different levels of analysis (individual, group, and organization). Through a series of propositions, we explore how individual leader integrity can affect outcomes such as trust, satisfaction, performance, and follower integrity. We also propose that integrity may be ascribed to groups and organizations, and explore the role that a group leader plays in fostering group- and organization-level integrity and outcomes such as trust and performance. Finally, we consider how leaders may help to resolve cross-level integrity discrepancies.

The notion that integrity is important for effective leadership is oft-asserted, perhaps to the point that it is almost an axiom in leadership studies (cf., Bass and Steidlmeier, 1999, Craig and Gustafson, 1998, Howell and Avolio, 1995, Kirkpatrick and Locke, 1991, Parry and Proctor-Thomson, 2002, Peterson, 2004 and Simons, 1999). Given its relatively lofty position as a normative leadership ideal, it may be somewhat surprising that there is actually very little research about the relationship between leadership and integrity. In particular, research concerning the relationship between leadership and integrity suffers in part from three primary problems. First, there is little agreement in the literature about the meaning of integrity (Becker, 1998 and Parry and Proctor-Thomson, 2002). It is frequently used to represent a wide variety of ideas and constructs and often overlaps with other terms such as morality, ethics, conscientiousness, honesty, and trustworthiness (Lowe, Cordery, & Morrison, 2004). Second, in spite of its popularity as a normative descriptor, there is actually little extant theory about integrity in the management and leadership literatures. The existing theory is relatively narrow in scope, usually focusing on only a single level of analysis (i.e., the individual leader). The confusion and disagreement about the term likely contribute to the third problem: relatively few empirical studies concerning integrity and leadership. Despite these problems, the sheer popularity of the term as a normative ideal – especially in leadership – indicates that further theoretical development and research is needed. Palanski & Yammarino (2007) have begun to address the first problem – lack of agreement about the meaning and scope of integrity – by suggesting a conceptualization of integrity that helps to sort through the confusion and disagreement about the term. They consider integrity as a virtue and explain ways to disentangle integrity from other closely related virtues such as authenticity, courage, honesty, and fairness. The purpose of this paper is to address the second primary problem in integrity and leadership: a lack of well-specified theory. The approach adopted here is to consider integrity at three primary levels of analysis: individual, group, and organization levels (Dansereau et al., 1984 and Kozlowski and Klein, 2000), with particular emphasis on the role that leadership plays with respect to each of these levels. The first step towards developing such a multi-level framework of integrity is to consider how integrity at the group and organization levels of analysis is related to the individual level in terms of structure and function; in other words, does the higher-level (i.e., group-level or organization-level) integrity construct contain the same set of elements as individual-level integrity? Further, does integrity at the group and organization levels result in the same type of outcomes as at the individual level? Also, how do integrity conceptualizations at the three levels relate to one another? For instance, how might individual-level integrity both partially constitute group-level and organization-level integrity and be partially influenced by group-level and organization-level integrity? Of particular interest in this discussion is the role of leadership as it relates to integrity. Specifically, the effects of a leader's personal integrity on outcomes such as trust, satisfaction, and performance are explored. In addition, the composition and nomological relationships of group-level and organization-level integrity are developed. These theoretical relationships are specified with the goal of a providing a sound basis from which to address the third main problem with integrity and leadership (i.e., lack of sound empirical testing) in future research. This paper begins by briefly reviewing the literature about integrity and leadership. Next, a multi-level conceptualization of integrity and its links to leadership and outcomes such as trust, satisfaction, and performance is presented. This conceptualization is based on a framework of isomorphism; that is, integrity at higher (i.e., group and organization) levels has a similar structure and function as integrity at lower (i.e., individual) levels. Particular emphasis is placed on the role of leadership for aligning integrity at all three levels of analysis. The paper concludes with discussion of limitations and future directions for theory and research on integrity and leadership.