عنوان انگلیسی
Structural impacts on the occurrence and effectiveness of transformational leadership: An empirical study at the organizational level of analysis
دانلود فوری مقاله + سفارش ترجمه 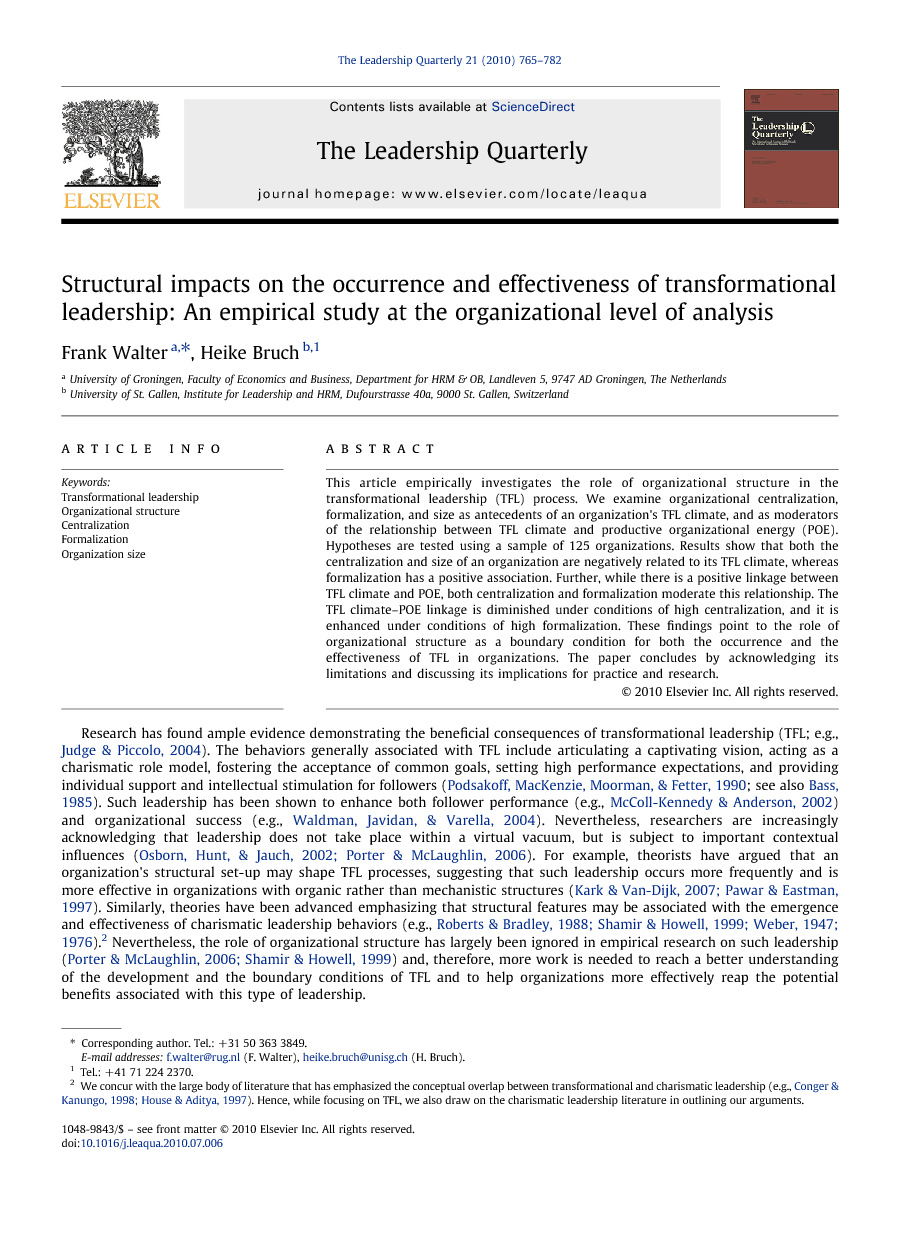 Research has found ample evidence demonstrating the beneficial consequences of transformational leadership (TFL; e.g., Judge & Piccolo, 2004). The behaviors generally associated with TFL include articulating a captivating vision, acting as a charismatic role model, fostering the acceptance of common goals, setting high performance expectations, and providing individual support and intellectual stimulation for followers (Podsakoff, MacKenzie, Moorman, & Fetter, 1990; see also Bass, 1985). Such leadership has been shown to enhance both follower performance (e.g., McColl-Kennedy & Anderson, 2002) and organizational success (e.g., Waldman, Javidan, & Varella, 2004). Nevertheless, researchers are increasingly acknowledging that leadership does not take place within a virtual vacuum, but is subject to important contextual influences (Osborn et al., 2002 and Porter and McLaughlin, 2006). For example, theorists have argued that an organization's structural set-up may shape TFL processes, suggesting that such leadership occurs more frequently and is more effective in organizations with organic rather than mechanistic structures (Kark and Van-Dijk, 2007 and Pawar and Eastman, 1997). Similarly, theories have been advanced emphasizing that structural features may be associated with the emergence and effectiveness of charismatic leadership behaviors (e.g., Roberts and Bradley, 1988, Shamir and Howell, 1999, Weber, 1947 and Weber, 1976).2 Nevertheless, the role of organizational structure has largely been ignored in empirical research on such leadership (Porter and McLaughlin, 2006 and Shamir and Howell, 1999) and, therefore, more work is needed to reach a better understanding of the development and the boundary conditions of TFL and to help organizations more effectively reap the potential benefits associated with this type of leadership. The limited evidence available suggests that organic rather than mechanistic structures may provide a more viable context for the emergence of TFL behaviors (e.g., Pillai and Meindl, 1998 and Shamir et al., 2000). Researchers have argued, however, that it may be problematic to capture organizations along a continuum from organic to mechanistic structures, and to relate such aspects to the occurrence of specific leadership behaviors (Atwater, 1995 and House, 1991). After all, the organic-vs.-mechanistic distinction covers a wide variety of organizational characteristics, including task specialization and abstractness, the definition of rights and obligations, vertical versus horizontal interaction tendencies, reliance on top-down instructions, and the prevalence of local versus general knowledge (Burns & Stalker, 1994, p. 120). Conceptualizing organizational structure in such a broad manner may result in a relatively superficial depiction of the structure–leadership linkage (Atwater, 1995 and Howell, 1997). Further, even though existing theoretical concepts refer to the role of organizational structure in TFL, empirical research has typically focused on structural impacts at lower levels (e.g., Pillai and Meindl, 1998 and Shamir et al., 2000). Given the problems associated with generalizing relationships across levels of analysis ( Ostroff, 1993a), additional work seems necessary to determine the transferability of previous findings to the organizational level. Finally, by focusing on structural facets as antecedents of TFL, empirical research has largely overlooked structural influences on the implications of such leadership. Even though theory suggests that the design choices organizations make create conditions for the emergence of TFL behaviors and shape the consequences of such leadership ( Pawar and Eastman, 1997 and Shamir and Howell, 1999), “there is a lack of empirical information on the moderating effect of the organizational context on leadership effectiveness” ( Koene, Vogelaar, & Soeters, 2002, p. 194; see also Hunter, Bedell-Avers, & Mumford, 2007). The present study addresses these issues. First, rather than differentiating organic from mechanistic structural set-ups, this research focuses on specific facets of organizational structure, namely centralization, formalization, and organization size (Atwater, 1995 and House, 1991). These facets represent key constructs in what has been labeled a “traditional view” on organizational structure (Brass, 1984, p. 519). Further, centralization, formalization, and organization size have been found to be only weakly related to each other (Schminke et al., 2002 and Tannenbaum and Dupuree-Bruno, 1994) and, therefore, should not be assumed to have parallel effects (Atwater, 1995). Considering these dimensions individually may contribute to a more differentiated understanding of the role of organizational structure, and it may point organizational decision-makers toward specific intervention opportunities to nurture TFL. Second, this study is located at the organizational level of analysis, conceptualizing TFL as an organization-level climate variable (cf. Chen and Bliese, 2002 and Ostroff and Bowen, 2000). It investigates the association between organizational structure, on the one hand, and the emergence and effectiveness of an organization's TFL climate (i.e., the degree to which leaders throughout the organization direct TFL behaviors toward their followers) on the other. Hypotheses are tested in a sample of 125 independent organizations, supplementing earlier, lower-level work. Third, we consider the moderating role of organizational structure in the relationship between TFL climate and an important outcome variable, namely productive organizational energy (POE; Bruch & Ghoshal, 2003). POE has been defined as “the extent to which a company has mobilized its emotional, cognitive, and behavioral potential in pursuit of its goals” (Cole, Bruch, & Vogel, 2005, p. 2). Thus, POE seems well suited to comprehensively capturing the consequences of TFL climate at the organizational level of analysis, along various (i.e., affective, mental, and behavioral) dimensions, and to examining organizational structure as a moderator of the effectiveness of TFL climate. As Atwater (1995, p. 466) noted, investigating such interactive relationships is a logical “next step in the research process”, once contextual impacts on the occurrence of specific leadership behaviors have been examined. To sum up, this study investigates organizational centralization, formalization, and size both as antecedents of TFL climate and as moderators of the relationship between TFL climate and POE (see Fig. 1). Thus, we extend previous theorizing and put such theory to an empirical test, complementing the predominantly conceptual perspective that has characterized this line of inquiry to date.

This study has examined the role of organizational structure in shaping the occurrence and effectiveness of TFL in organizations. We found that, combined, organizational centralization, formalization, and size explain more than 30% of the variance in organizations' TFL climate. As hypothesized, both centralization and organization size were negatively related with TFL climate, whereas there was a positive association for formalization. Moreover, we found that both centralization and formalization moderated the TFL climate–POE linkage, with centralization reducing and formalization strengthening this positive relationship.8 Organizational structure, therefore, seems to constitute an important contextual boundary condition both for the development and for the consequences of TFL climate. This research contributes to the TFL literature in various ways. First, our results support previous theoretical arguments pointing to a potential linkage between organizational structure and TFL (Pawar and Eastman, 1997 and Shamir and Howell, 1999). This investigation is among the first to empirically address this issue at the organizational level. Thus, it increases confidence in the viability of prior theorizing. Considered collectively, findings from earlier, lower-level research (e.g., Pillai and Meindl, 1998 and Shamir et al., 2000) and the current study suggest that the relationship between structure and TFL can be generalized across levels of analysis, with the structural characteristics of work units, departments, and organizations influencing the extent to which leaders engage in such behaviors. Future research directly examining this conclusion would be highly interesting. Second, this study addresses calls for a more thorough investigation of contextual moderators in TFL research (Shamir and Howell, 1999 and Yukl, 1999). Reinforcing the skepticism that various academics (e.g., Conger, 1999 and Vandenberghe, 1999) have voiced regarding claims about the near-universal effectiveness of TFL (Bass, 1997), our results indicate that the positive impacts of such leadership may depend, at least to some extent, on an organization's structure. Thus, we accord with Shamir and Howell's (1999) view that while TFL “is potentially applicable to most organizational situations, it is not equally applicable to all situations” (p. 278). Finally, our study moves beyond the broad distinction between organic versus mechanistic settings that has characterized earlier research (Pillai and Meindl, 1998, Shamir and Howell, 1999 and Shamir et al., 2000) and contributes to a more differentiated depiction of the relevance of organizational structure to TFL processes. Centralization, for instance, seems to have distinctly negative consequences, diminishing both the occurrence and the effectiveness of TFL climate in organizations. Formalization, in contrast, is beneficial both as an antecedent of TFL climate and as a moderator of the TFL climate–POE linkage. Finally, even though a large organizational size imposes constraints on the occurrence of TFL behaviors, it appears to have only limited relevance in shaping the effectiveness of TFL climate. Hence, this study demonstrates the benefits of considering specific structural facets when investigating the context in which TFL takes place.