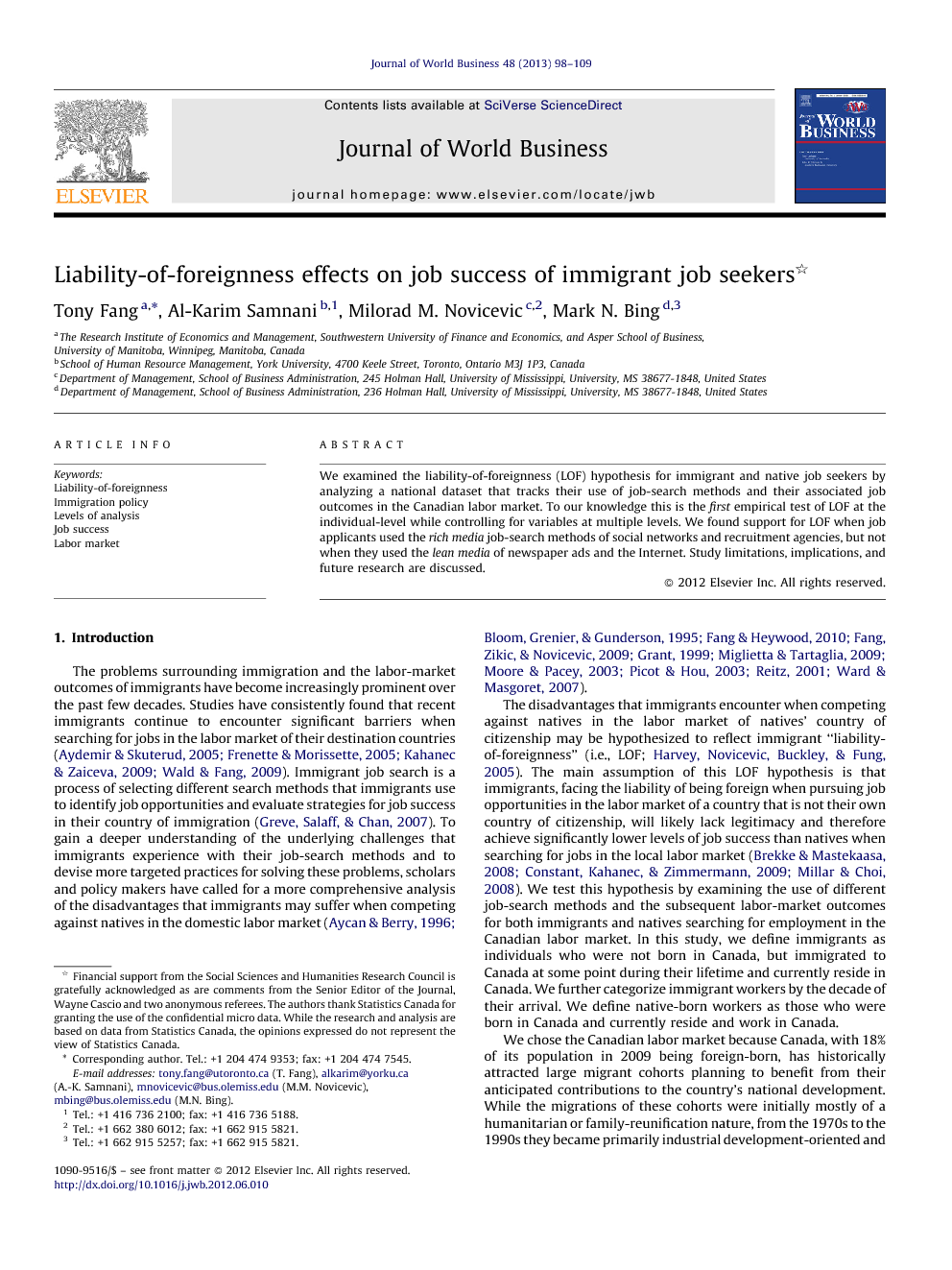 We examined the liability-of-foreignness (LOF) hypothesis for immigrant and native job seekers by analyzing a national dataset that tracks their use of job-search methods and their associated job outcomes in the Canadian labor market. To our knowledge this is the first empirical test of LOF at the individual-level while controlling for variables at multiple levels. We found support for LOF when job applicants used the rich media job-search methods of social networks and recruitment agencies, but not when they used the lean media of newspaper ads and the Internet. Study limitations, implications, and future research are discussed.

The problems surrounding immigration and the labor-market outcomes of immigrants have become increasingly prominent over the past few decades. Studies have consistently found that recent immigrants continue to encounter significant barriers when searching for jobs in the labor market of their destination countries (Aydemir and Skuterud, 2005, Frenette and Morissette, 2005, Kahanec and Zaiceva, 2009 and Wald and Fang, 2009). Immigrant job search is a process of selecting different search methods that immigrants use to identify job opportunities and evaluate strategies for job success in their country of immigration (Greve, Salaff, & Chan, 2007). To gain a deeper understanding of the underlying challenges that immigrants experience with their job-search methods and to devise more targeted practices for solving these problems, scholars and policy makers have called for a more comprehensive analysis of the disadvantages that immigrants may suffer when competing against natives in the domestic labor market (Aycan and Berry, 1996, Bloom et al., 1995, Fang and Heywood, 2010, Fang et al., 2009, Grant, 1999, Miglietta and Tartaglia, 2009, Moore and Pacey, 2003, Picot and Hou, 2003, Reitz, 2001 and Ward and Masgoret, 2007). The disadvantages that immigrants encounter when competing against natives in the labor market of natives’ country of citizenship may be hypothesized to reflect immigrant “liability-of-foreignness” (i.e., LOF; Harvey, Novicevic, Buckley, & Fung, 2005). The main assumption of this LOF hypothesis is that immigrants, facing the liability of being foreign when pursuing job opportunities in the labor market of a country that is not their own country of citizenship, will likely lack legitimacy and therefore achieve significantly lower levels of job success than natives when searching for jobs in the local labor market (Brekke and Mastekaasa, 2008, Constant et al., 2009 and Millar and Choi, 2008). We test this hypothesis by examining the use of different job-search methods and the subsequent labor-market outcomes for both immigrants and natives searching for employment in the Canadian labor market. In this study, we define immigrants as individuals who were not born in Canada, but immigrated to Canada at some point during their lifetime and currently reside in Canada. We further categorize immigrant workers by the decade of their arrival. We define native-born workers as those who were born in Canada and currently reside and work in Canada. We chose the Canadian labor market because Canada, with 18% of its population in 2009 being foreign-born, has historically attracted large migrant cohorts planning to benefit from their anticipated contributions to the country's national development. While the migrations of these cohorts were initially mostly of a humanitarian or family-reunification nature, from the 1970s to the 1990s they became primarily industrial development-oriented and were based on a planned skill/point-based system. In the mid 1990s, the skill-based system underwent a structural change as Canada made a shift in its immigration policy from attracting industrial workers to attracting knowledge workers and entrepreneurial investors. Overall, the history of different policies that have been developed to attract and support immigrants within Canada makes the context of its job market very relevant and appropriate for testing the liability-of-foreignness (LOF) hypothesis for cohorts of immigrant and native job seekers. Moreover, when compared to other national labor markets, it can be argued that the Canadian labor market is a market in which immigrants are actually very unlikely to encounter the LOF effects on their job success (Walsh, 2008). By choosing the Canadian labor market for this area of inquiry, we provide a conservative test of LOF effects, which, if found, provide conservative estimates of LOF's impact on immigrant job search and employment outcomes (e.g., pay satisfaction). The main purpose of this paper is to test the LOF hypothesis by analyzing the job-search methods used and the associated job success of comparable immigrant and native workers using data available for Canadian workplaces. First, we explain the LOF hypothesis in terms of the barriers that immigrants may encounter when competing against natives in the job market of the natives’ country of citizenship. Our prediction, derived from the LOF hypothesis, is that the labor-market outcomes for immigrants will be significantly less favorable than those for natives. Second, we provide a brief literature review of immigrant job-search methods to hypothesize how different methods may inflate or suppress the emergence of the LOF phenomenon. Third, we describe our sample, present our data analyses, and provide the interpretation of our results. In conclusion, we summarize our findings, outline limitations of our study, discuss policy implications, and suggest directions for future research.

Immigrants searching for jobs face many barriers that can be attributed to their liability-of-foreignness. This form of liability is typically manifested in either local discriminatory employment practices or stereotyping the immigrants’ country of national origin. The immigrants’ liability of foreignness stems primarily from their unfamiliarity with the local environment and their lack of local roots to help them gain necessary legitimacy in the local labor market (Greve et al., 2008). In our study, we examined whether individual immigrants using different job-search methods experience a liability-of-foreignness relative to natives when attempting to achieve job success in the Canadian labor market. We found LOF effects on immigrants’ job success when they used rich media (social networks and employment agencies) for their job searches. We found very few LOF effects on job success of immigrants who used lean media (newspaper ads and the internet) for their job searches. These results will likely be instrumental to researchers, practitioners and policy-makers to identify best practices associated with reducing the “liability-of-outsidership” (Johanson & Vahlne, 2009, p. 1411) effects on the job success of immigrant job seekers.