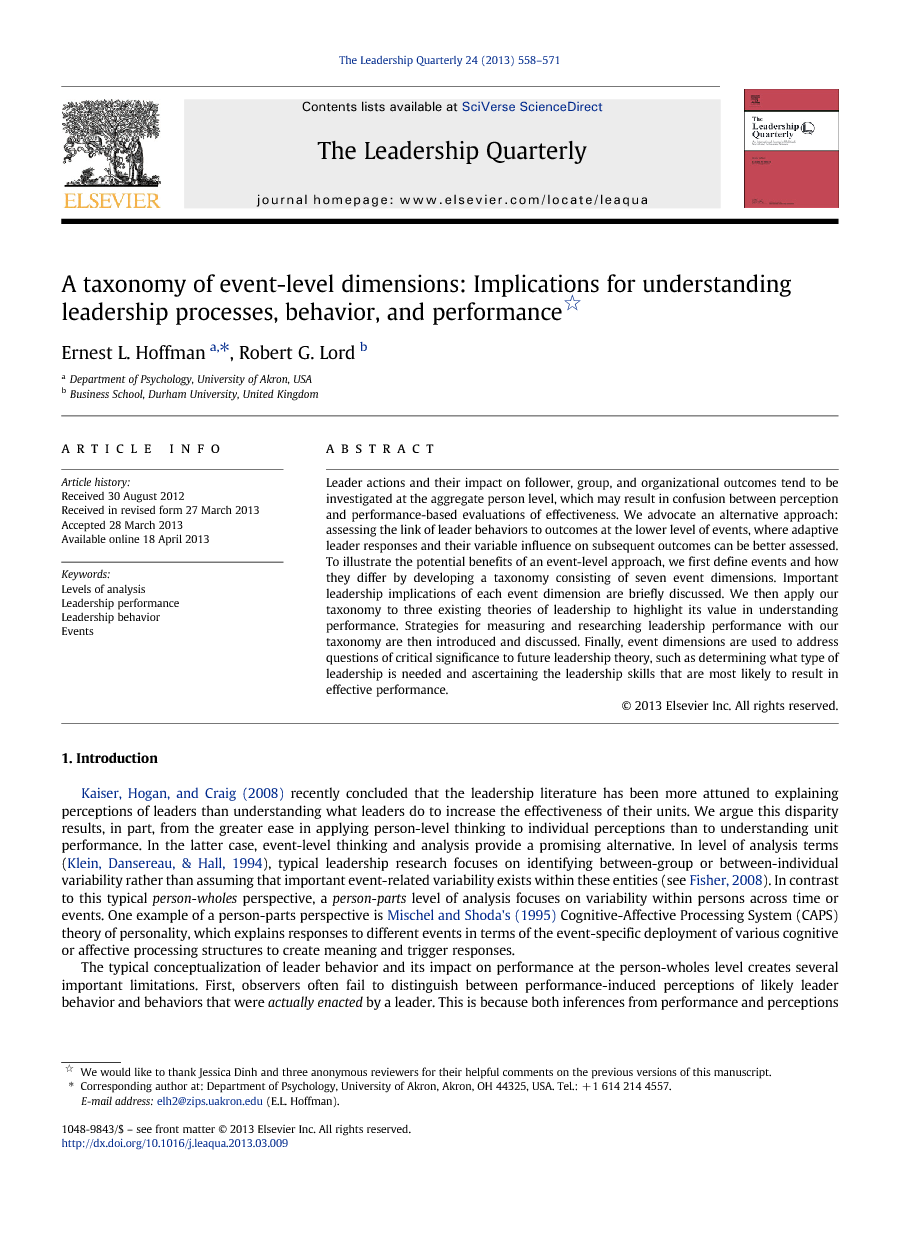 Leader actions and their impact on follower, group, and organizational outcomes tend to be investigated at the aggregate person level, which may result in confusion between perception and performance-based evaluations of effectiveness. We advocate an alternative approach: assessing the link of leader behaviors to outcomes at the lower level of events, where adaptive leader responses and their variable influence on subsequent outcomes can be better assessed. To illustrate the potential benefits of an event-level approach, we first define events and how they differ by developing a taxonomy consisting of seven event dimensions. Important leadership implications of each event dimension are briefly discussed. We then apply our taxonomy to three existing theories of leadership to highlight its value in understanding performance. Strategies for measuring and researching leadership performance with our taxonomy are then introduced and discussed. Finally, event dimensions are used to address questions of critical significance to future leadership theory, such as determining what type of leadership is needed and ascertaining the leadership skills that are most likely to result in effective performance.

Kaiser, Hogan, and Craig (2008) recently concluded that the leadership literature has been more attuned to explaining perceptions of leaders than understanding what leaders do to increase the effectiveness of their units. We argue this disparity results, in part, from the greater ease in applying person-level thinking to individual perceptions than to understanding unit performance. In the latter case, event-level thinking and analysis provide a promising alternative. In level of analysis terms (Klein, Dansereau, & Hall, 1994), typical leadership research focuses on identifying between-group or between-individual variability rather than assuming that important event-related variability exists within these entities (see Fisher, 2008). In contrast to this typical person-wholes perspective, a person-parts level of analysis focuses on variability within persons across time or events. One example of a person-parts perspective is Mischel and Shoda's (1995) Cognitive-Affective Processing System (CAPS) theory of personality, which explains responses to different events in terms of the event-specific deployment of various cognitive or affective processing structures to create meaning and trigger responses. The typical conceptualization of leader behavior and its impact on performance at the person-wholes level creates several important limitations. First, observers often fail to distinguish between performance-induced perceptions of likely leader behavior and behaviors that were actually enacted by a leader. This is because both inferences from performance and perceptions of specific behaviors are encoded in the same leadership categories, and they are equally available when retrospective ratings of behavior are guided by leadership categories ( Lord & Maher, 1991). We contend that this type of effect is to be expected when both behavioral and performance information are encoded at the wholes level and implicit leadership theories (ILTs) guide the encoding of leader behaviors ( Brown, Scott, & Lewis, 2004). An additional drawback of a wholes perspective is that leader behaviors and their relationship with performance vary from one event to the other (Fisher, 2008 and Morgeson, 2005). Such variability makes it difficult for raters to aggregate these constructs to the person level without misrepresenting some aspects of leader behavior or its relationship to performance (Dinh and Lord, 2012 and Shondrick et al., 2010). Rather than aggregating episodes to create a representative evaluation of a leader, raters often rely on more simplified assessments based on affective information such as liking (Brown & Keeping, 2005), previous online judgments (Hastie & Park, 1986), expectations guided by implicit leadership theories (ILTs) (Shondrick et al., 2010), or overemphasizing salient performance episodes (see Ballinger & Rockman, 2010). Such simplifications create ambiguity in the meaning of correlations between aggregated leadership behaviors and performance. In contrast, understanding performance at the person or group-parts level of events has several advantages in unraveling the relation of leader behavior to performance (Dinh & Lord, 2012). First, events generally have a shorter duration, allowing more focused understanding of the effects of leadership on performance. Second, the level of behavioral detail afforded by an event-level perspective allows observers to accurately gauge causal effects, thereby avoiding the use of common sense theories (Calder, 1977) and romanticized beliefs about a leader's effects on performance (Meindl, 1995). Third, the processing of event-level information tends to use script-based rather than person-based encoding (Foti & Lord, 1987), making it easier for observers to detect causality among the multiple situational and person-level factors that can influence performance. Fourth, memory for events may rely more on episodic than semantic memory (Shondrick et al., 2010), which minimizes performance effects on leadership ratings (Martell & Evans, 2005). Finally, a parts perspective may help build on extant leadership theories that focus on how leaders and other organizational members manage events (e.g., Mumford, 2006 and Smith and Peterson, 1988). For instance, Smith and Peterson's (1988)event management theory defines leadership in terms of effective event management; however, the specific type of leadership (e.g., ideological, pragmatic, or charismatic, Mumford, 2006) that is effective may depend on specific combinations of event features. In short, a better understanding of the causal dynamics associated with leadership requires more precise theorizing and measurement, which we maintain can be developed at an event level. By presenting the case for event-level theory and methodology, we make three important contributions to the leadership literature. First, we define events as distinguishable units of activity, occurring in a specific time and location, and having a perceptible beginning and end ( Zacks, Tversky, & Iyer, 2001). This definition broadens current definitions of events beyond “extraordinary manifestations” or “occurrences that interrupt the routines of organizational life and prompt controlled processing” ( Hannah et al., 2009 and Morgeson and Derue, 2006). Second, we develop a taxonomy that recognizes events as multi-dimensional phenomena that can be characterized by distinct features. Although we are not the first to taxonomize events (see Ellsworth & Scherer, 2003) or performance ( Fleishman & Quaintance, 1984), the notion that events possess multiple characteristics has yet to be explicitly explored in organizational research. A systematic framework for understanding events has the potential to enhance our understanding of the dynamics of leadership processes. Finally, we show how this event taxonomy can be used to address important theoretical and measurement issues related to leader performance. We begin by developing a taxonomy consisting of the seven event-level characteristics that are described in Table 1. For each event dimension we provide: a) a definition, b) the conceptual and empirical background, and c) a discussion of its relevance to the leader–performance relationship. We then demonstrate how this event taxonomy can be applied to advancing leadership theory, measurement, and research. Initially, we discuss each event dimension separately, but we acknowledge and later will discuss the importance of interactions occurring among dimensions.

Porter and McLaughlin (2006) argued that leadership research needed to pay more attention to context, and consistent with this recommendation, recent theory has begun to highlight the importance of event-level aspects of leadership effectiveness (e.g., Dinh and Lord, 2012, Dinh et al., 2012 and Hernandez et al., 2011). Indeed, some researchers have begun to conceptualize leadership as a type of performance that emerges from events, rather than a defining quality of a person, group, or organization (e.g., Day, 2001, Pearce and Conger, 2003 and Uhl-Bien et al., 2007). Though philosophically consistent with these important advancements, our approach differs in a fundamental way by emphasizing a more micro-level view of context and conceptualizing events as a key locus of leadership. Our view also emphasizes a parts rather than a wholes level of analysis, and our taxonomy extends such thinking by identifying multiple aspects of events that can elicit or moderate the effectiveness of specific leadership behaviors. We believe that event-level theory and measurement can help us understand how and when leader actions enhance individual, group, or organizational performance.