عنوان انگلیسی
The other side of the coin: Vocational interests, interest differentiation and annual income at the occupation level of analysis
دانلود فوری مقاله + سفارش ترجمه 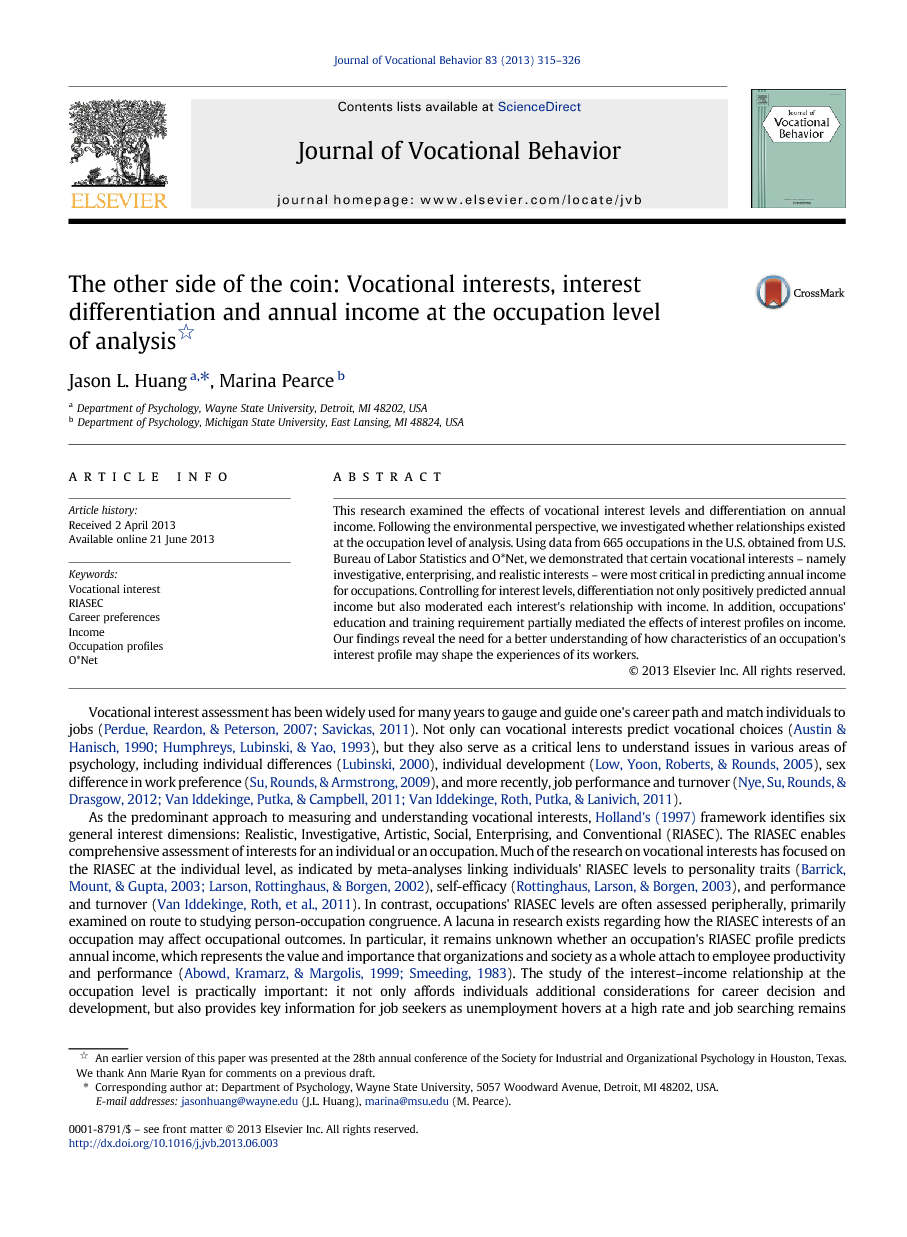 This research examined the effects of vocational interest levels and differentiation on annual income. Following the environmental perspective, we investigated whether relationships existed at the occupation level of analysis. Using data from 665 occupations in the U.S. obtained from U.S. Bureau of Labor Statistics and O*Net, we demonstrated that certain vocational interests – namely investigative, enterprising, and realistic interests – were most critical in predicting annual income for occupations. Controlling for interest levels, differentiation not only positively predicted annual income but also moderated each interest's relationship with income. In addition, occupations' education and training requirement partially mediated the effects of interest profiles on income. Our findings reveal the need for a better understanding of how characteristics of an occupation's interest profile may shape the experiences of its workers.

Vocational interest assessment has been widely used for many years to gauge and guide one's career path and match individuals to jobs (Perdue et al., 2007 and Savickas, 2011). Not only can vocational interests predict vocational choices (Austin and Hanisch, 1990 and Humphreys et al., 1993), but they also serve as a critical lens to understand issues in various areas of psychology, including individual differences (Lubinski, 2000), individual development (Low, Yoon, Roberts, & Rounds, 2005), sex difference in work preference (Su, Rounds, & Armstrong, 2009), and more recently, job performance and turnover (Nye et al., 2012, Van Iddekinge et al., 2011a and Van Iddekinge et al., 2011b). As the predominant approach to measuring and understanding vocational interests, Holland's (1997) framework identifies six general interest dimensions: Realistic, Investigative, Artistic, Social, Enterprising, and Conventional (RIASEC). The RIASEC enables comprehensive assessment of interests for an individual or an occupation. Much of the research on vocational interests has focused on the RIASEC at the individual level, as indicated by meta-analyses linking individuals' RIASEC levels to personality traits (Barrick et al., 2003 and Larson et al., 2002), self-efficacy (Rottinghaus, Larson, & Borgen, 2003), and performance and turnover (Van Iddekinge, Roth, et al., 2011). In contrast, occupations' RIASEC levels are often assessed peripherally, primarily examined on route to studying person-occupation congruence. A lacuna in research exists regarding how the RIASEC interests of an occupation may affect occupational outcomes. In particular, it remains unknown whether an occupation's RIASEC profile predicts annual income, which represents the value and importance that organizations and society as a whole attach to employee productivity and performance (Abowd et al., 1999 and Smeeding, 1983). The study of the interest–income relationship at the occupation level is practically important: it not only affords individuals additional considerations for career decision and development, but also provides key information for job seekers as unemployment hovers at a high rate and job searching remains difficult and challenging (Parker, 2012 and Uchitelle, 2009). Theoretically, an explication of the interest–income association may provide occupational interests as a lens to understanding income-related psychological phenomena, such as occupational attainment (Judge, Klinger, & Simon, 2010), perceived job stress at work (DeVoe & Pfeffer, 2011), financial strain (Judge, Hurst, & Simon, 2009), and pay satisfaction (Berkowitz, Fraser, Treasure, & Cochran, 1987). Thus, the goal of this paper is to cast new light on the understanding of an occupation's interest profile by linking that profile to annual income. Aside from focusing on the levels of RIASEC interests associated with a given occupation's interest profile, we also aim to measure and involve the differentiation across interest dimensions as an important characteristic that indicates how well-defined an interest profile is ( Holland, 1997). Simply put, a differentiated interest profile has high interest scores on some dimensions and low interest scores on other dimensions, whereas an undifferentiated interest profile has interest scores that are similar across RIASEC dimensions. Despite its theoretical relevance, differentiation remains “a weak construct” (p. 148) with a “checkered research career” (p. 172, Holland, 1997). Inconsistent findings regarding the main effects of interest differentiation on certain outcomes have led to a decline in research in this area in recent years ( Nauta, 2010). Instead of continuing the search for the main effects of differentiation on vocational outcomes, we focus on the extent to which differentiation moderates the effects of the RIASEC. In the sections that follow, we provide the theoretical foundations for four core hypotheses and introduce three general research questions. We test for the hypotheses and research questions with data pooled from the U.S. Bureau of Labor Statistics and O*Net for 665 different occupations in the U.S., and discuss the implications of those results as well as avenues for future research.

Using data from U.S. Bureau of Labor Statistics and O*Net, we examined the association between interest profiles and income at the occupation level of analysis. Investigative, enterprising, and realistic interests emerged as the most important predictors of income. Extending Holland's (1997) theory on differentiation, the study demonstrated the role of differentiation in moderating main effects of interest levels. The education and training requirement of an occupation was found to mediate the influence of occupational interest profile on income.