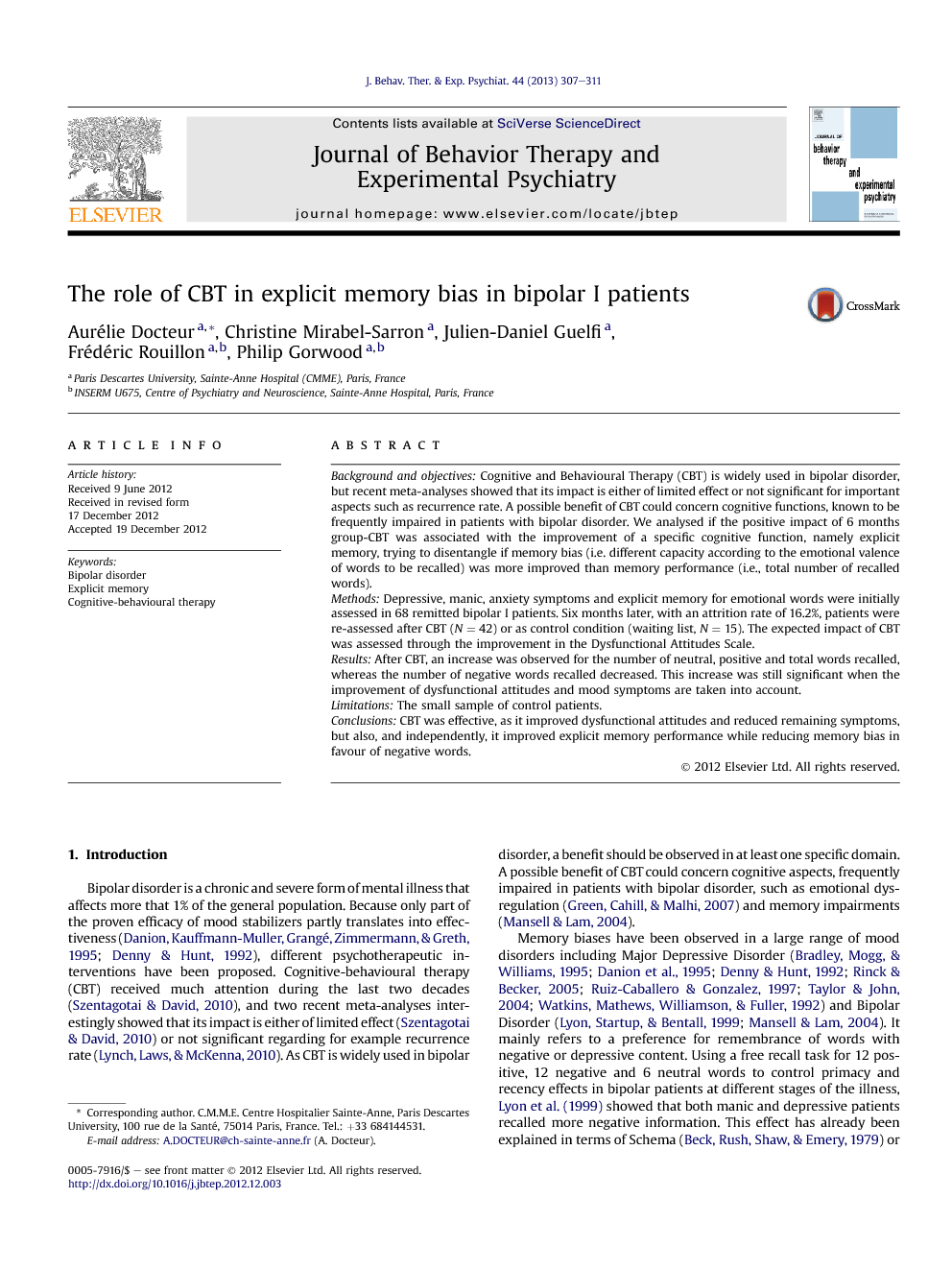 Background and objectives Cognitive and Behavioural Therapy (CBT) is widely used in bipolar disorder, but recent meta-analyses showed that its impact is either of limited effect or not significant for important aspects such as recurrence rate. A possible benefit of CBT could concern cognitive functions, known to be frequently impaired in patients with bipolar disorder. We analysed if the positive impact of 6 months group-CBT was associated with the improvement of a specific cognitive function, namely explicit memory, trying to disentangle if memory bias (i.e. different capacity according to the emotional valence of words to be recalled) was more improved than memory performance (i.e., total number of recalled words). Methods Depressive, manic, anxiety symptoms and explicit memory for emotional words were initially assessed in 68 remitted bipolar I patients. Six months later, with an attrition rate of 16.2%, patients were re-assessed after CBT (N = 42) or as control condition (waiting list, N = 15). The expected impact of CBT was assessed through the improvement in the Dysfunctional Attitudes Scale. Results After CBT, an increase was observed for the number of neutral, positive and total words recalled, whereas the number of negative words recalled decreased. This increase was still significant when the improvement of dysfunctional attitudes and mood symptoms are taken into account. Limitations The small sample of control patients. Conclusions CBT was effective, as it improved dysfunctional attitudes and reduced remaining symptoms, but also, and independently, it improved explicit memory performance while reducing memory bias in favour of negative words.

Bipolar disorder is a chronic and severe form of mental illness that affects more that 1% of the general population. Because only part of the proven efficacy of mood stabilizers partly translates into effectiveness (Danion, Kauffmann-Muller, Grangé, Zimmermann, & Greth, 1995; Denny & Hunt, 1992), different psychotherapeutic interventions have been proposed. Cognitive-behavioural therapy (CBT) received much attention during the last two decades (Szentagotai & David, 2010), and two recent meta-analyses interestingly showed that its impact is either of limited effect (Szentagotai & David, 2010) or not significant regarding for example recurrence rate (Lynch, Laws, & McKenna, 2010). As CBT is widely used in bipolar disorder, a benefit should be observed in at least one specific domain. A possible benefit of CBT could concern cognitive aspects, frequently impaired in patients with bipolar disorder, such as emotional dysregulation (Green, Cahill, & Malhi, 2007) and memory impairments (Mansell & Lam, 2004). Memory biases have been observed in a large range of mood disorders including Major Depressive Disorder (Bradley, Mogg, & Williams, 1995; Danion et al., 1995; Denny & Hunt, 1992; Rinck & Becker, 2005; Ruiz-Caballero & Gonzalez, 1997; Taylor & John, 2004; Watkins, Mathews, Williamson, & Fuller, 1992) and Bipolar Disorder (Lyon, Startup, & Bentall, 1999; Mansell & Lam, 2004). It mainly refers to a preference for remembrance of words with negative or depressive content. Using a free recall task for 12 positive, 12 negative and 6 neutral words to control primacy and recency effects in bipolar patients at different stages of the illness, Lyon et al. (1999) showed that both manic and depressive patients recalled more negative information. This effect has already been explained in terms of Schema (Beck, Rush, Shaw, & Emery, 1979) or Network (Bower, 1981) theory, suggesting an alteration in cognitive processing of material with emotional valence. One qualitative study suggests that poorly integrated negative (e.g. failure, victimisation) and positive (e.g. successful social performance) self-concepts characterise memories that are triggered by emotional cue words (Mansell & Hodson, 2009). Memory global performance, especially regarding verbal declarative memory, is also impaired in many patients with bipolar disorder (Malhi, Ivanovski, Szekeres, & Olley, 2004; Martinez-Aran et al., 2004). Initially explained in terms of a resource allocation model (Ellis, 1991), recent imaging studies have suggested that brain alterations involved in memory may be responsible for these findings, including the prefrontal cortex and the hippocampus (Phillips, Ladouceur, & Drevets, 2008). At a clinical level, using a delayed recall task, we found a lifetime cumulative impact of depressive history (length of the disorder) on memory performance (Gorwood, Corruble, Falissard, & Goodwin, 2008), in accordance with the hypothesis that depressive episodes have a ‘neurotoxic’ effect. Indeed, it has been proposed that repeated episodes are damaging to the brain, and cognitive impairment is a functional correlate of such damage (Altshuler, 1993). Furthermore, meta-analyses have confirmed that hippocampal volume reduction and the total number of depressive episodes may be particularly correlated (Campbell, Marriott, Nahmias, & MacQueen, 2004; Videbech & Ravnkilde, 2004), and that euthymic bipolar patients have verbal memory impairment (Torres, Boudreau, & Yatham, 2007). A study comparing first episodes and multiple episodes for cognitive impairment indeed detected that verbal memory was the only cognitive function worsening with multiple episodes (Nehra, Chakrabarti, Pradhan, & Khehra, 2006). Reducing the cognitive impairment associated with bipolar disorder is meaningful, since poor cognitive functions are associated with a negative outcome of the disorder, both at the clinical (Martinez-Aran et al., 2004) and the functional (Martino et al., 2009) levels. Psychotropic drugs and CBT might have different impacts on cognitive functions of bipolar disorder. Many antidepressive drugs enhance neuroplasticity, this biological effect potentially explaining its efficacy on mood disorders (Sanacora, 2008) or stress (Dupin et al., 2006). Although there is not yet definite support to stipulate that neuroplasticity could help restoring cognitive functions, this possibility has been proposed. Indeed, Escitalopram improved delayed memory score after stroke, even when controlling for its impact on depression (Jorge, 2010). The efficiency of CBT could be more specific on memory bias, for example reducing a larger attention process for negative cues (Garratt & Ingram, 2007). Recent research (Gregory, Brewin, Mansell, & Donaldson, 2010) suggested the role of modifying intrusive memories (from the past) as a powerful intervention in bipolar disorder. These authors showed that while euthymic, bipolar patients experience intrusive memories, with an impact on emotions and behaviours. In addition, other researchers (Gruber, Harvey, & Johnson, 2009) showed that a reflective processing (distanced) of negative memories is associated with a reduction of negative affect as compared to a ruminative processing. One of the major component of CBT intervention for bipolar disorder indeed focuses on affective regulation, with the learning of cognitive techniques to deal with intrusive thoughts and images (positive and negatives). Building on these findings, we formed the hypothesis that CBT would decrease the memory bias (less negative words being recalled) and improve the memory performance (with a higher rate of recalled non-negative words), above its expected main effect (i.e. improving dysfunctional attitudes). To check if this effect is specific of CBT, and in order to control for the time effect, we used a limited sample of patients on a waiting list with the same inclusion criteria (N = 20).