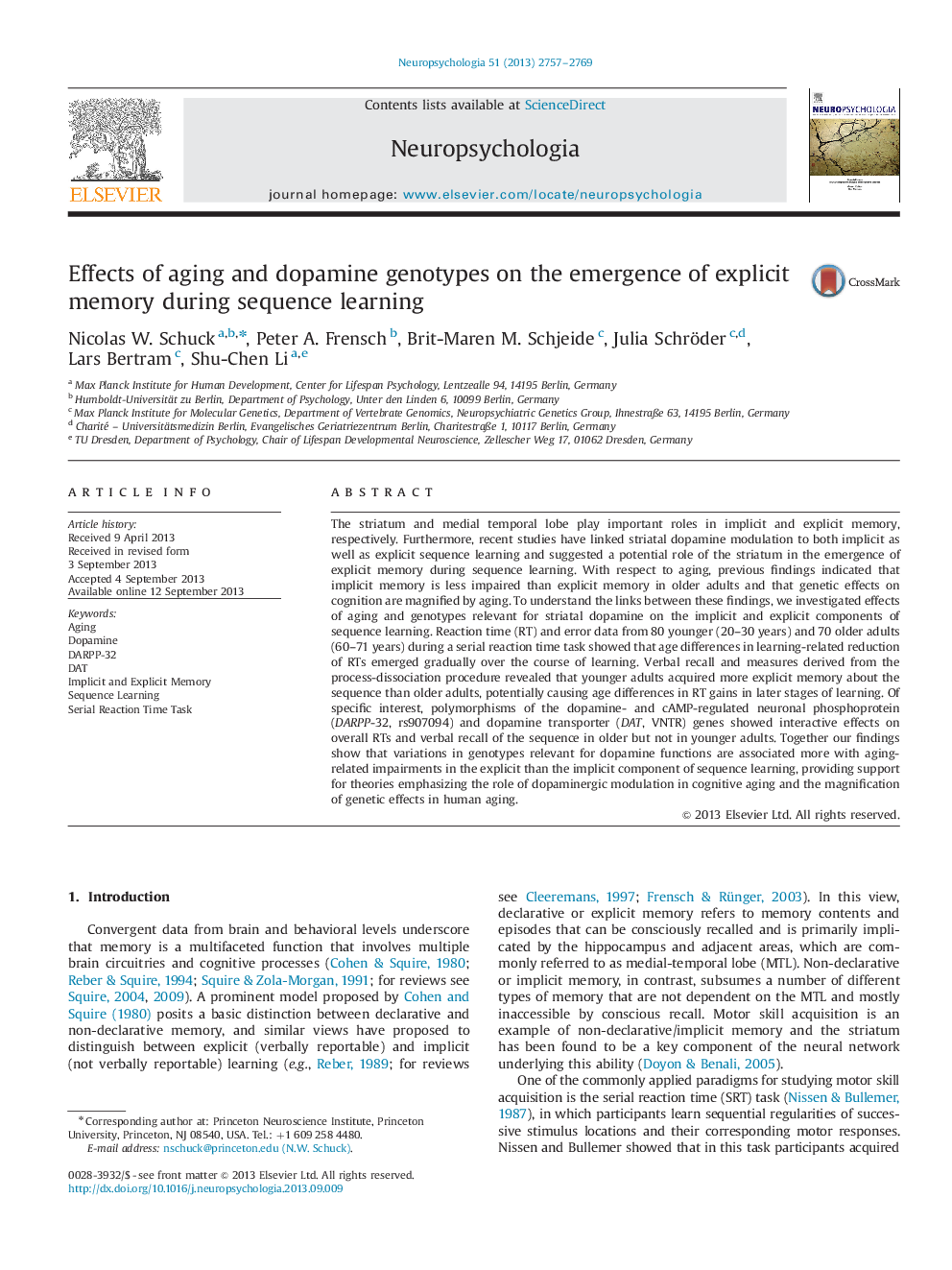 The striatum and medial temporal lobe play important roles in implicit and explicit memory, respectively. Furthermore, recent studies have linked striatal dopamine modulation to both implicit as well as explicit sequence learning and suggested a potential role of the striatum in the emergence of explicit memory during sequence learning. With respect to aging, previous findings indicated that implicit memory is less impaired than explicit memory in older adults and that genetic effects on cognition are magnified by aging. To understand the links between these findings, we investigated effects of aging and genotypes relevant for striatal dopamine on the implicit and explicit components of sequence learning. Reaction time (RT) and error data from 80 younger (20–30 years) and 70 older adults (60–71 years) during a serial reaction time task showed that age differences in learning-related reduction of RTs emerged gradually over the course of learning. Verbal recall and measures derived from the process-dissociation procedure revealed that younger adults acquired more explicit memory about the sequence than older adults, potentially causing age differences in RT gains in later stages of learning. Of specific interest, polymorphisms of the dopamine- and cAMP-regulated neuronal phosphoprotein (DARPP-32, rs907094) and dopamine transporter (DAT, VNTR) genes showed interactive effects on overall RTs and verbal recall of the sequence in older but not in younger adults. Together our findings show that variations in genotypes relevant for dopamine functions are associated more with aging-related impairments in the explicit than the implicit component of sequence learning, providing support for theories emphasizing the role of dopaminergic modulation in cognitive aging and the magnification of genetic effects in human aging.

Convergent data from brain and behavioral levels underscore that memory is a multifaceted function that involves multiple brain circuitries and cognitive processes (Cohen and Squire, 1980, Reber and Squire, 1994 and Squire and Zola-Morgan, 1991; for reviews see Squire, 2004 and Squire, 2009). A prominent model proposed by Cohen and Squire (1980) posits a basic distinction between declarative and non-declarative memory, and similar views have proposed to distinguish between explicit (verbally reportable) and implicit (not verbally reportable) learning (e.g., Reber, 1989; for reviews see Cleeremans, 1997 and Frensch and Rünger, 2003). In this view, declarative or explicit memory refers to memory contents and episodes that can be consciously recalled and is primarily implicated by the hippocampus and adjacent areas, which are commonly referred to as medial-temporal lobe (MTL). Non-declarative or implicit memory, in contrast, subsumes a number of different types of memory that are not dependent on the MTL and mostly inaccessible by conscious recall. Motor skill acquisition is an example of non-declarative/implicit memory and the striatum has been found to be a key component of the neural network underlying this ability ( Doyon & Benali, 2005). One of the commonly applied paradigms for studying motor skill acquisition is the serial reaction time (SRT) task (Nissen & Bullemer, 1987), in which participants learn sequential regularities of successive stimulus locations and their corresponding motor responses. Nissen and Bullemer showed that in this task participants acquired motor skills without being aware of what was learned or the learning process itself, and further studies showed that this learning co-occurred with activation in the striatum (Aizenstein et al., 2006, Atallah et al., 2007 and Rauch et al., 1997). Relatedly, studies on the underlying neurochemical processes have suggested that implicit learning is, in part, implicated by dopaminergic receptor mechanisms in the striatum (Karabanov et al., 2010) and is modulated by the gene encoding the dopamine transporter protein (DAT, Simon et al., 2011), which is active mostly in the striatum ( Heinz et al., 2000). At the same time, it has been reported that motor skill acquisition is preserved in amnesic patients, suggesting that is it hippocampus independent and dissociable from declarative/explicit memory ( Nissen and Bullemer, 1987 and Reber and Squire, 1994).