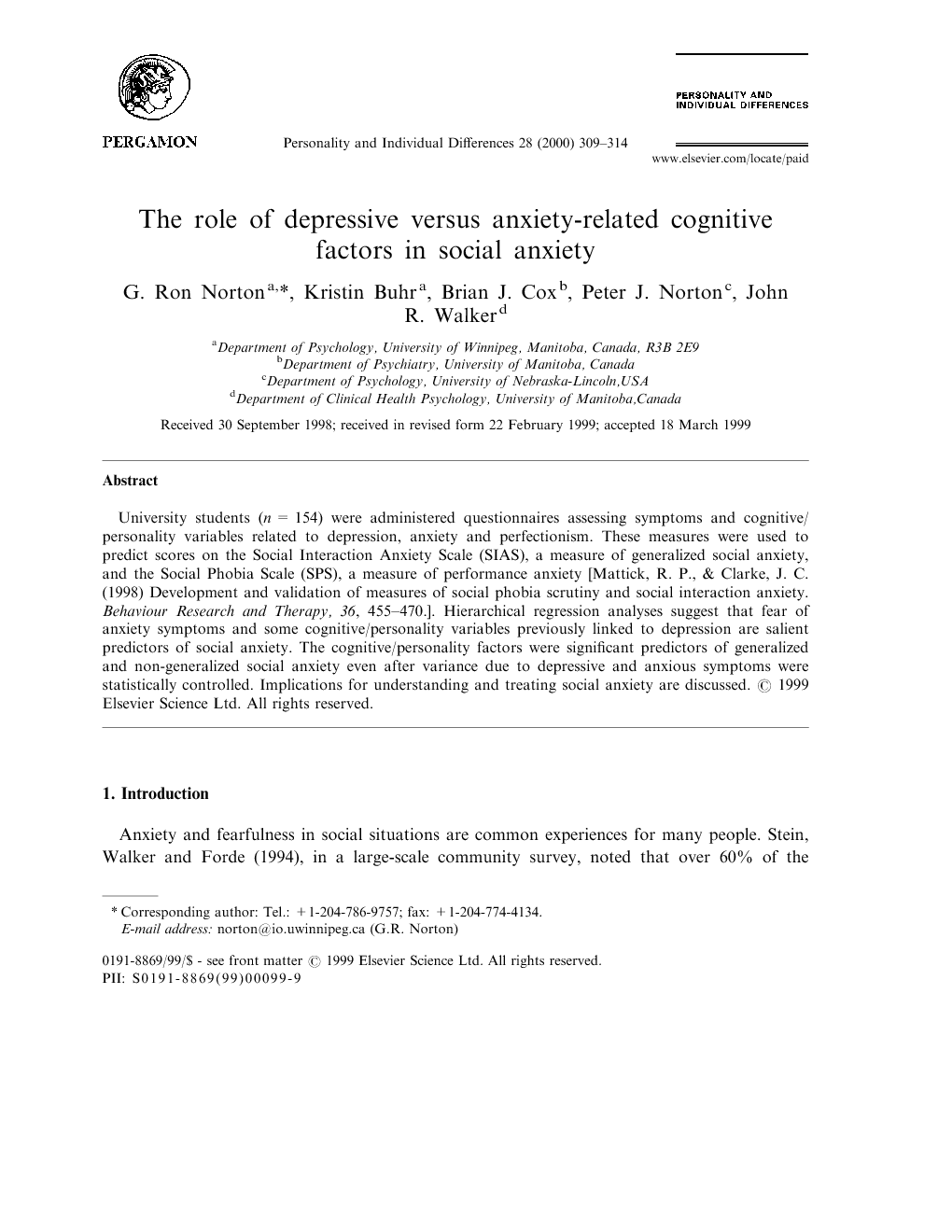 University students (n=154) were administered questionnaires assessing symptoms and cognitive/personality variables related to depression, anxiety and perfectionism. These measures were used to predict scores on the Social Interaction Anxiety Scale (SIAS), a measure of generalized social anxiety, and the Social Phobia Scale (SPS), a measure of performance anxiety [Mattick, R. P., & Clarke, J. C. (1998) Development and validation of measures of social phobia scrutiny and social interaction anxiety. Behaviour Research and Therapy, 36, 455–470.]. Hierarchical regression analyses suggest that fear of anxiety symptoms and some cognitive/personality variables previously linked to depression are salient predictors of social anxiety. The cognitive/personality factors were significant predictors of generalized and non-generalized social anxiety even after variance due to depressive and anxious symptoms were statistically controlled. Implications for understanding and treating social anxiety are discussed.

Anxiety and fearfulness in social situations are common experiences for many people. Stein, Walker and Forde (1994), in a large-scale community survey, noted that over 60% of the respondents reported experiencing significant social anxiety in at least one social setting or situation. Norton, Cox, Hewitt and McLeod (1997) have recently shown that two measures of social anxiety, the Social Interaction Anxiety Scale and the Social Phobia Scale (Mattick & Clarke, 1998) are associated with different personality measures. The Social Interaction Anxiety Scale (SIAS) appears to measure fears involving social interactions such as engaging in conversations and greetings, whereas the Social Phobia Scale (SPS) taps fears of being scrutinized especially in performance-based situations (Heimberg, Mueller, Holt, Hope & Leibowitz, 1992; Habke, Hewitt, Norton & Asmundson, 1997). Norton et al. (1997) demonstrated that, the SPS was best predicted by scores on the Anxiety Sensitivity Index (ASI: Peterson & Reiss, 1992), a dispositional measure of fear of anxiety symptoms arising from the belief that they will have consequences that are socially, physically, or psychologically harmful. Scores on the SIAS were best predicted by subjects’ scores on the Neuroticism subscale of the NEO-Five Factor Inventory (Costa & McCrae, 1985). Neuroticism is a higher-order trait denoting a proneness to experience a wide range of negative affect (Costa & McCrae, 1992). In the current study we sought to examine lower-order traits associated with different types of negative affect. In addition to an anxiety related trait (anxiety sensitivity), we chose to investigate lower-order cognitive/personality factors that, although previously linked to depression, have been hypothesized to play an important role in generalized social anxiety as well (Cox & Swinson, 1995). Theoretically, Clark and Wells (1995) have suggested that, like depressed individuals, persons with severe social anxiety hold negative beliefs about their worth and value. Clark and Wells maintain, however, that depressogenic beliefs are more global and stable, while those associated with social anxiety are more circumscribed to social situations. Yet, there is a paucity of research that has investigated these more global constructs, previously linked to depression (e.g., self-criticism), as they might relate to social anxiety. Additionally, inspection of the item content on depression-related cognitive measures (e.g., Cognition Checklist: Beck, Brown, Steer, Eidelson & Riskind, 1987) reveals that many items refer to a social or interpersonal context (e.g., ‘I’m a social failure’). In summary, the purpose of this study was to determine how depression-related and anxiety-related cognitive/personality factors might be associated with social anxiety. More specifically, we attempted to determine if they are differentially associated with measures of generalized social anxiety (SIAS) and performance related social anxiety (SPS).