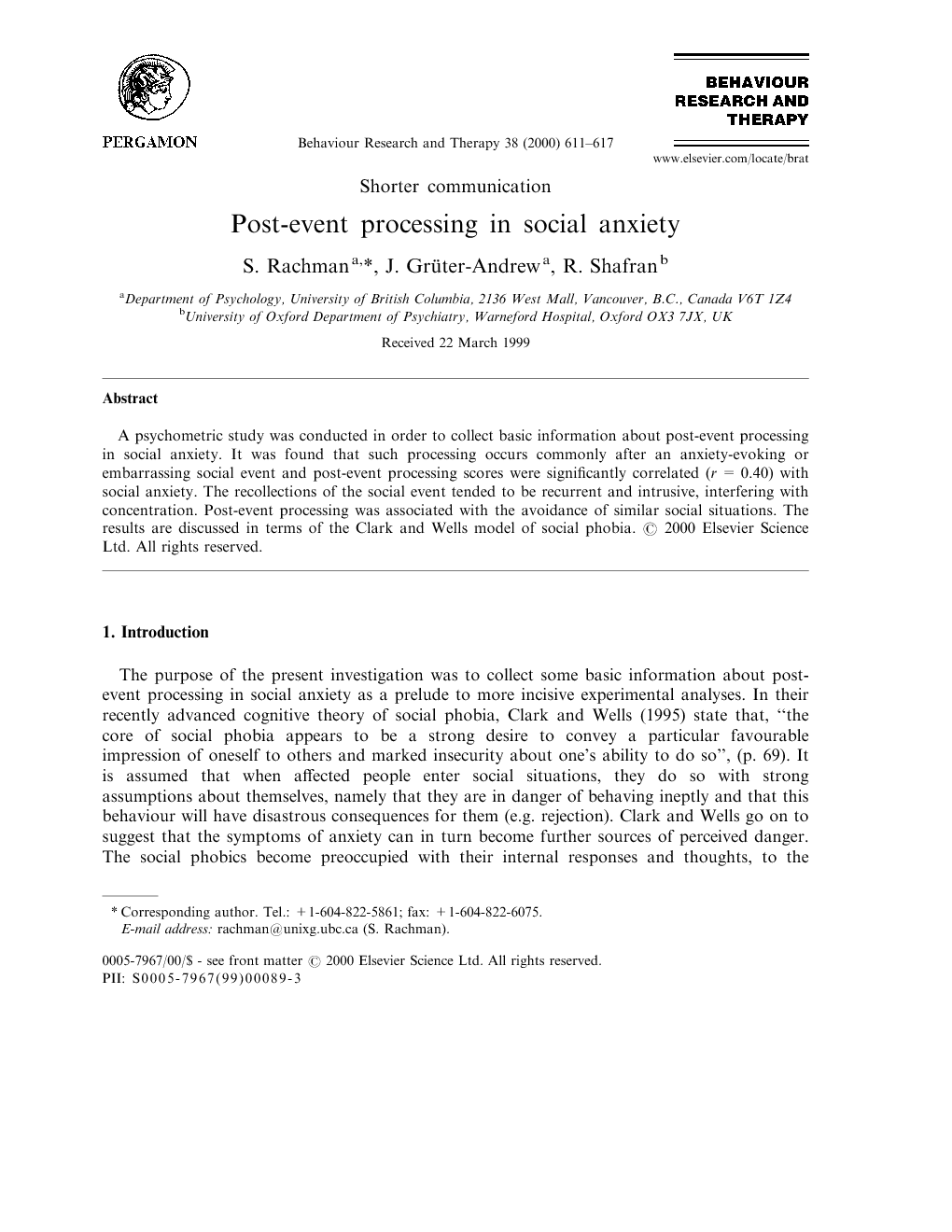 The purpose of the present investigation was to collect some basic information about post-event processing in social anxiety as a prelude to more incisive experimental analyses. In their recently advanced cognitive theory of social phobia, Clark and Wells (1995) state that, “the core of social phobia appears to be a strong desire to convey a particular favourable impression of oneself to others and marked insecurity about one's ability to do so”, (p. 69). It is assumed that when affected people enter social situations, they do so with strong assumptions about themselves, namely that they are in danger of behaving ineptly and that this behaviour will have disastrous consequences for them (e.g. rejection). Clark and Wells go on to suggest that the symptoms of anxiety can in turn become further sources of perceived danger. The social phobics become preoccupied with their internal responses and thoughts, to the neglect of other, external, information. In their analysis of why it is that social phobics fail to disconfirm their pervasive negative beliefs about the dangers to them in social events, Clark and Wells postulate four processes, and it is the fourth, post-event processing, that is the subject of this study. They suggest that people who are socially anxious are inclined to conduct a review of distressing or embarrassing events, to conduct a ‘post-mortem’. “During this review, the patient's anxious feelings and negative self-perceptions are likely to figure particularly prominently because they were processed in detail while the patient was in the situation and hence were strongly encoded in memory. The interaction is likely to be seen as much more negative than it really was, and this might help to explain why some social phobics report a sense of shame that persists for a while after the anxiety has subsided. A further aspect of the post-mortem is the retrieval of other instances of perceived social failure“, (p. 75). Although they do not make it explicit in the 1995 account, it is evident that Clark and Wells attribute the persistence of maladaptive social cognitions, and the consequent social anxiety, in some measure to the effects of post-event processing. There are some fragments of relevant evidence, such as socially anxious subjects having a better memory for negative information about themselves, but Clark and Wells constructed their theory largely on the basis of their earlier research on panic and related disorders, and on the writings of contributors to the subject of social anxiety, including Heimberg, Barlow, Salkovskis, Beck and so forth. As a first step in investigating the nature and potentially critical consequences of post-event processing, it is of course necessary to establish that it does in fact occur, and gain some notion of its characteristics. What does it consist of, and does it have particular features? Is it confined to social anxiety or is it also a feature of other types of anxiety problems? What causes and maintains post-event processing and, from the point of view of the Clark and Wells (1995) theory, what are its major consequences?