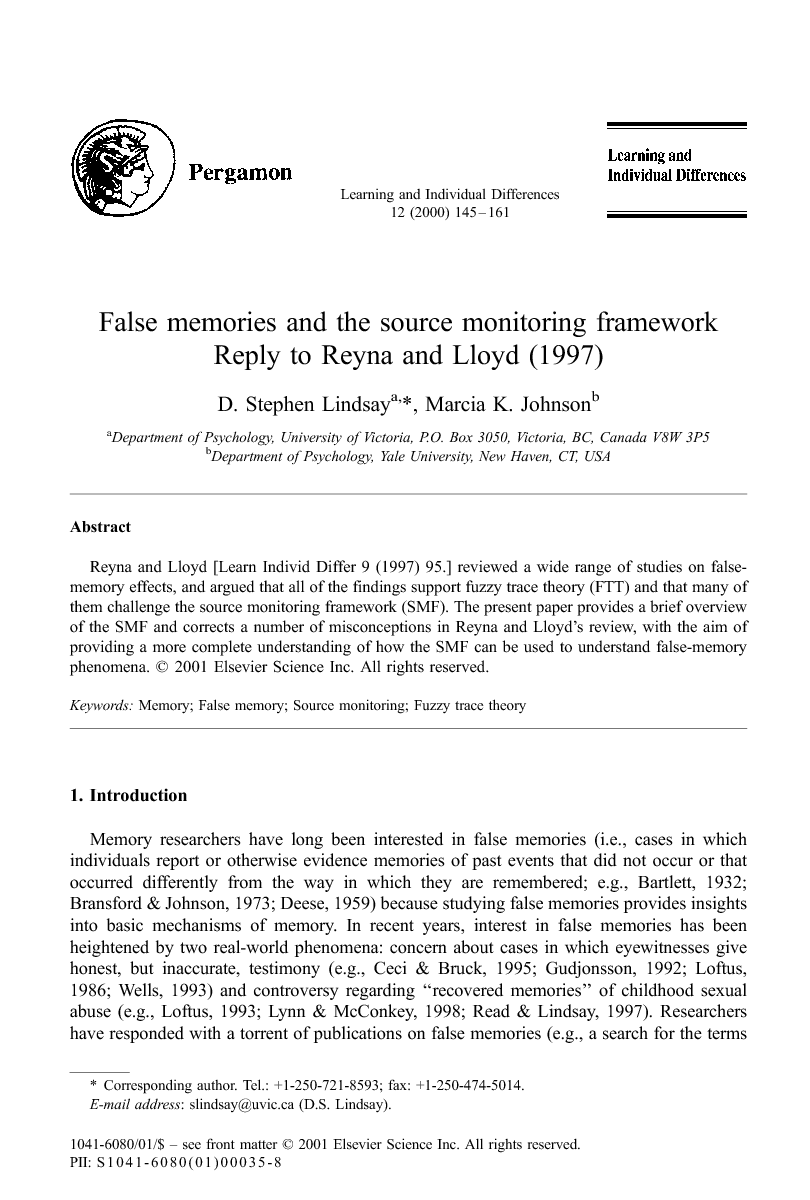 Reyna and Lloyd [Learn Individ Differ 9 (1997) 95.] reviewed a wide range of studies on false-memory effects, and argued that all of the findings supported fuzzy trace theory (FTT) and that many of them challenge the source monitoring framework (SMF). The present paper provides a brief overview of the SMF and corrects a number of misconceptions in Reyna and Lloyd's review, with the aim of providing a more complete understanding of how the SMF can be used to understand false-memory phenomena.

Memory researchers have long been interested in false memories (i.e., cases in which individuals report or otherwise evidence memories of past events that did not occur or that occurred differently from the way in which they are remembered; e.g., Bartlett, 1932, Bransford & Johnson, 1973 and Deese, 1959) because studying false memories provides insights into basic mechanisms of memory. In recent years, interest in false memories has been heightened by two real-world phenomena: concern about cases in which eyewitnesses give honest, but inaccurate, testimony (e.g., Ceci & Bruck, 1995, Gudjonsson, 1992, Loftus, 1986 and Wells, 1993) and controversy regarding “recovered memories” of childhood sexual abuse (e.g., Loftus, 1993, Lynn & McConkey, 1998 and Read & Lindsay, 1997). Researchers have responded with a torrent of publications on false memories (e.g., a search for the terms “false memory” or “false memories” in PsychInfo yielded nearly 500 articles between 1996 and 1999). Reyna and Lloyd (1997) compared three accounts of false-memory phenomena: fuzzy trace theory (FTT), the source monitoring framework (SMF), and a version of constructivism (the last of which will not be discussed here). Reyna and Lloyd argued that all of the reviewed studies of false memories support FTT, and that many of those findings challenge the SMF.1 The present paper provides a brief overview of the SMF and a thumbnail sketch of FTT, and then corrects a number of misconceptions in Reyna and Lloyd's article. We hope to thereby provide readers with a more complete and useful understanding of how the SMF can be used to understand false-memory phenomena, and of its current limitations and directions for future development.