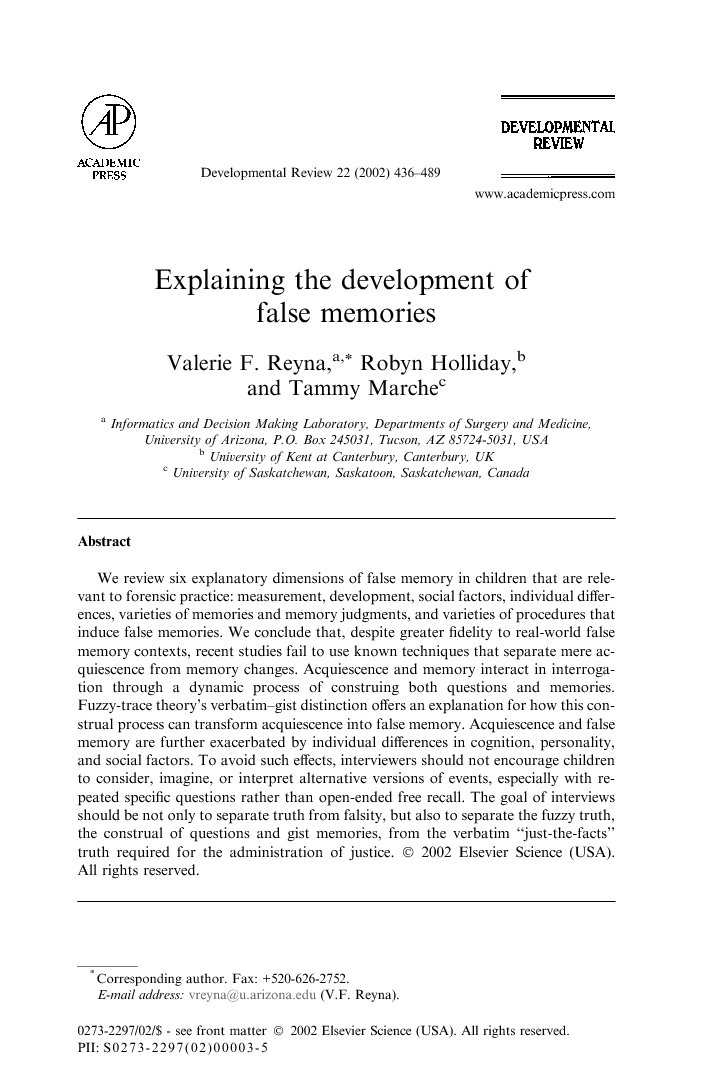 We review six explanatory dimensions of false memory in children that are relevant to forensic practice: measurement, development, social factors, individual differences, varieties of memories and memory judgments, and varieties of procedures that induce false memories. We conclude that, despite greater fidelity to real-world false memory contexts, recent studies fail to use known techniques that separate mere acquiescence from memory changes. Acquiescence and memory interact in interrogation through a dynamic process of construing both questions and memories. Fuzzy-trace theory’s verbatim–gist distinction offers an explanation for how this construal process can transform acquiescence into false memory. Acquiescence and false memory are further exacerbated by individual differences in cognition, personality, and social factors. To avoid such effects, interviewers should not encourage children to consider, imagine, or interpret alternative versions of events, especially with repeated specific questions rather than open-ended free recall. The goal of interviews should be not only to separate truth from falsity, but also to separate the fuzzy truth, the construal of questions and gist memories, from the verbatim “just-the-facts” truth required for the administration of justice.

Psychological science and the legal system have become closely intertwined. The courts have taken notice of groundbreaking research on false memory in children and adults, and this research is now routinely applied to actual cases. The contribution of psychological science has not been peripheral. Rather, research has changed the outcomes of important cases involving long prison terms and lifetime labeling of individuals as sexual offenders, sometimes exculpating and sometimes implicating the accused. In this article, we explore the ramifications of theories of false memory for forensic practice, particularly in cases in which children are victims or witnesses. Paradoxically, the most practical approach to applying research in the courtroom is to understand underlying theory, which is nothing more than an explanation for why we observe what we do in human behavior. The rationale for understanding theory is that legal cases rarely, if ever, mimic the exact circumstances of situations studied in research (Brainerd, Reyna, & Poole, 2000). Even in more “true-to-life” studies that intentionally incorporate realistic elements, the match to a particular case is never exact. In order to extrapolate from research to practice, then, it is essential to understand the principles governing human memory derived from research and to map these abstract principles appropriately onto the facts of specific cases. To begin, we provide an overview of six explanatory dimensions of false memory in children: measurement issues, developmental differences, individual differences, social versus cognitive factors, varieties of memory and memory judgments, and varieties of procedures that induce false memories. Each of these dimensions is important for interpreting research findings and for applying the findings appropriately to real cases. In the following sections, we discuss these dimensions in more depth, with detailed illustrations from developmental studies of both spontaneous and implanted false memories. Finally, we summarize the lessons learned from this review by providing a worked example of a fictionalized case, which is a composite of actual cases. Overview of six explanatory dimensions of false memory Although we discuss the six dimensions of false memory separately, it is obvious that they are difficult to dissever from one another and that they operate jointly in real life. Nevertheless, it is useful to consider them separately, but to remind ourselves of the ways they interact. Similarly, when researchers discuss the effects of one factor, such as developmental level, they typically implicitly assume that all other factors are equal. However, in real life, factors are correlated; for example, poverty, nutrition, education, ethnicity, family size, quality of schools, and neighborhood environment are usually correlated. Therefore, in extrapolating from good research in which additional factors are controlled (so that “all other factors are equal”), we must be alert to the probability that these dimensions do not operate in isolation in real cases. The first of these dimensions, measurement issues, seems the least relevant to real life, and yet the opposite is true. By measurement issues, we mean the validity, reliability, and sensitivity of measures used in research to detect what they are intended to detect. For example, failing to detect an age difference in susceptibility to misleading questions could simply be the result of bad measurement, i.e., not asking sufficiently probing questions about children’s memories. The age difference could really be there, but it was not detected because of insensitive methodology. A rule of thumb in research is that fancy theoretical explanations for an observed behavior (or lack of behavior) are not needed if a simple, well-known measurement explanation fully accounts for the behavior. Thus, because sensitive measures are difficult to achieve in psychology, measurement explanations generally trump other kinds of explanations. Numerous illustrations of this principle of “measurement primacy” can be found in developmental studies of false memory. A pivotal example is the failure to detect age differences, at least for school-age children as opposed to preschoolers, in susceptibility to misinformation (see Bruck & Ceci, 1999, for a review). Some studies have found age differences, whereas others using similar sample sizes and procedures have failed to detect such differences. The question for researchers and forensic practitioners is, which set of studies is correct? Are younger school-age children more susceptible to misleading questions than are older school-age children (other factors being equal)? Naturally, measurement explanations do not apply if procedural errors can be identified in studies that would taint their findings. However, when two conflicting sets of studies seem comparable methodologically, in general, the studies that detect a significant difference are more informative than those that do not. That is, null effects (e.g., findings of no difference between age groups) prove nothing, suggesting that studies that have found age differences are somehow methodologically superior to those that have not. (Subsequent research should then be conducted to isolate the methodological features responsible for detection of an effect.) Therefore, we can conclude that there is likely to be a real difference between younger and older school-age children in susceptibility to misleading questions, an underlying difference that might or might not be revealed in particular circumstances (circumstances that can often be identified predictably, based on research). This real difference in susceptibility is analogous to an underlying disease process, such as coronary artery disease, which places a person at risk for a heart attack, although this susceptibility does not guarantee a specific outcome on a specific day.1 The question of age differences in false memory, then, becomes a question of how age differences in susceptibility to false memory are manifested under particular circumstances.