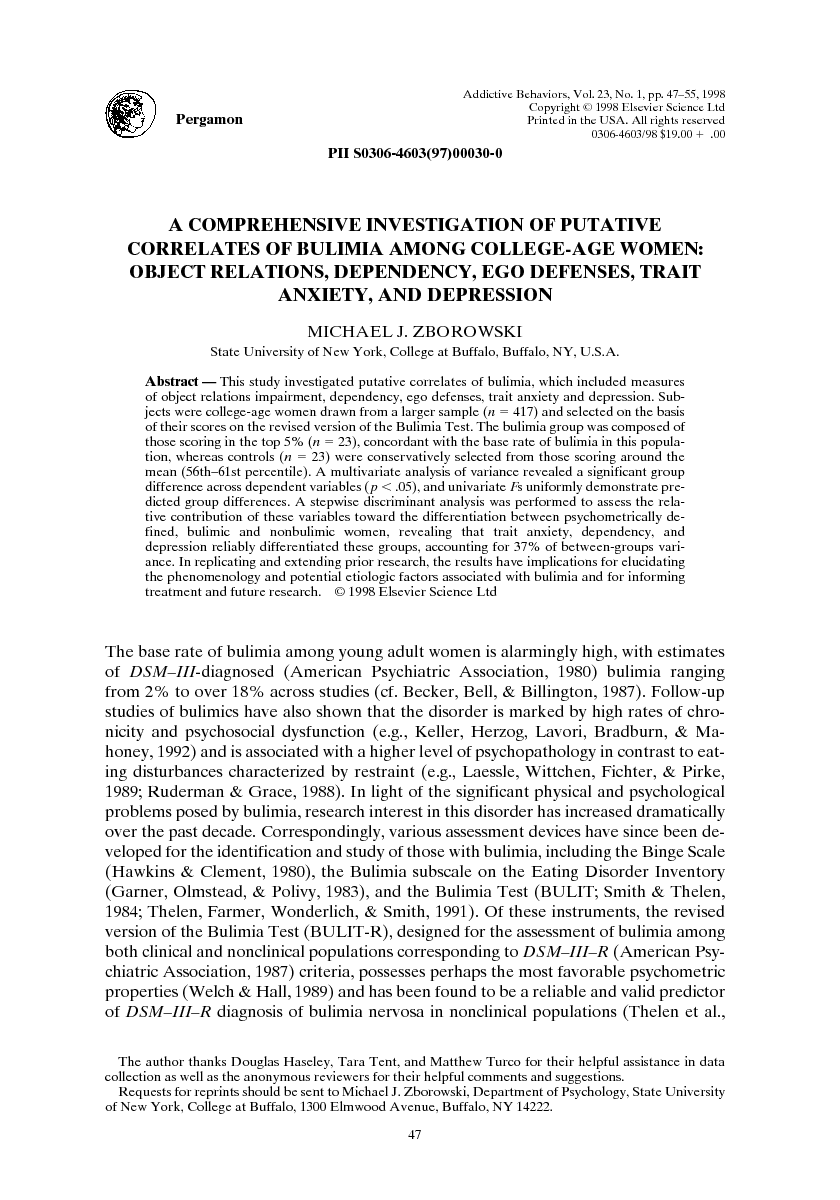 This study investigated putative correlates of bulimia, which included measures of object relations impairment, dependency, ego defenses, trait anxiety and depression. Subjects were college-age women drawn from a larger sample (n = 417) and selected on the basis of their scores on the revised version of the Bulimia Test. The bulimia group was composed of those scoring in the top 5% (n = 23), concordant with the base rate of bulimia in this population, whereas controls (n = 23) were conservatively selected from those scoring around the mean (56th–61st percentile). A multivariate analysis of variance revealed a significant group difference across dependent variables ( p < .05), and univariate Fs uniformly demonstrate predicted group differences. A stepwise discriminant analysis was performed to assess the relative contribution of these variables toward the differentiation between psychometrically defined, bulimic and nonbulimic women, revealing that trait anxiety, dependency, and depression reliably differentiated these groups, accounting for 37% of between-groups variance. In replicating and extending prior research, the results have implications for elucidating the phenomenology and potential etiologic factors associated with bulimia and for informing treatment and future research.

The base rate of bulimia among young adult women is alarmingly high, with estimates of DSM–III-diagnosed ( American Psychiatric Association 1980) bulimia ranging from 2% to over 18% across studies (cf. Becker, Bell, & Billington 1987). Follow-up studies of bulimics have also shown that the disorder is marked by high rates of chronicity and psychosocial dysfunction (e.g., Keller, Herzog, Lavori, Bradburn, & Mahoney 1992) and is associated with a higher level of psychopathology in contrast to eating disturbances characterized by restraint (e.g., Laessle, Wittchen, Fichter, & Pirke 1989; Ruderman & Grace 1988). In light of the significant physical and psychological problems posed by bulimia, research interest in this disorder has increased dramatically over the past decade. Correspondingly, various assessment devices have since been developed for the identification and study of those with bulimia, including the Binge Scale ( Hawkins & Clement 1980), the Bulimia subscale on the Eating Disorder Inventory ( Garner, Olmstead, & Polivy 1983), and the Bulimia Test (BULIT; Smith & Thelen 1984; Thelen, Farmer, Wonderlich, & Smith 1991). Of these instruments, the revised version of the Bulimia Test (BULIT-R), designed for the assessment of bulimia among both clinical and nonclinical populations corresponding to DSM–III–R ( American Psychiatric Association 1987) criteria, possesses perhaps the most favorable psychometric properties ( Welch & Hall 1989) and has been found to be a reliable and valid predictor of DSM–III–R diagnosis of bulimia nervosa in nonclinical populations ( Thelen, Farmer, Wonderlich, & Smith 1991). A more recent study ( Thelen, Mintz, & Vander Wal 1996) has similarly demonstrated the predictive validity of the BULIT–R using DSM–IV ( American Psychiatric Association; 1994) criteria, yielding rates of sensitivity and specificity of .91 and .96, respectively. It is for these reasons that the BULIT–R was employed in the present study. A prominent focus of the research to date has involved the investigation of etiological factors among both clinical and nonclinical populations, demonstrating that bulimia is reliably associated with depression, anxiety, personality disorder, and substance abuse (e.g.,Braun, Sunday, & Halmi 1994). With respect to personality disorders, bulimia is most consistently associated with the Cluster B disorders in general and borderline personality disorder in particular (e.g.,Herzog, Keller, Lavori, Kenny, & Sacks 1992). Relatedly, several theorists have postulated that disturbed object relations, deriving from deficits in early parent–child interactions, underlie the interpersonal difficulties, problems with affect modulation, impulsivity, low self-esteem, and symptom constellation of bulimia (e.g.,Heesacker & Neimeyer 1990). This is not without empirical support. Recent studies have demonstrated a higher level of object relations disturbance in bulimics (e.g.,Becker, Bell, & Billington 1987; Heesacker & Neimeyer 1990; Humphrey 1986; Steiger & Houle 1991), particularly involving the dimension of insecure attachment (indicative of ambivalent and painful interpersonal relationships, abandonment fears, and intense longing for closeness), as well as maladaptive defenses and deficits in self-esteem. Although not empirically examined prior to the present study, the potential etiologic role of interpersonal dependency may be significant. The degree to which these factors are primary or secondary to the eating pathology, however, has been the source of considerable debate (e.g.,Vitousek & Manke 1994). Although beyond the scope of the present review, there is evidence to suggest that psychiatric and psychological disturbance precedes the development of bulimia (e.g.,Braun, Sunday, & Halmi 1994) and that similar object relations impairment and maladaptive defenses are found among subclinical populations (e.g.,Steiger & Houle 1991). These dimensions may therefore be precursors to, rather than consequences of, bulimia. Awaiting more conclusive longitudinal research, investigating appropriately screened, nonclinical samples mitigates against the potentially mediating effects of variables associated with clinical manifestations of bulimia. Taken together, bulimia appears to be characterized by object relations disturbance and associated interpersonal difficulties, less adaptive coping styles, affective disturbance marked by depression and anxiety, and presumably inordinate interpersonal dependency. Although interpersonal dependency has not yet been specifically examined, several psychodynamic formulations of bulimia have emphasized the central role of dependency and corollary problems with separation, theoretically evolving from early developmental phenomena that precluded the development of a coherent sense of self and the associated capacity for mature relatedness as the basis of eating pathology and affective instability (e.g.,Bruch 1985; Schwartz 1988). This conceptualization parallels Blatt’s (Blatt & Zuroff 1992) theory and description of the anaclitic personality, which is marked by fears of abandonment, inordinate dependency, and particular vulnerability to interpersonal disruption (i.e., anaclitic depression). As this suggests, the investigation of dependency is of both theoretical and practical relevance. The studies just outlined have generally included a narrower investigation of the hypothesized correlates believed to be etiologically related to bulimia and therefore do not permit a broader appraisal of the relative contribution of measures of depression, anxiety, object relations, ego defenses, and dependency. The present study was designed to replicate and extend prior research, comparing psychometrically defined bulimic women and matched controls on each of these dimensions, and to render a differential appraisal of the relative importance of these variables using a stepwise discriminant analysis. Prior research has shown that bulimics evince an overall level of pathology that exceeds both controls and other (non-eating-disordered) psychiatric patients (e.g.,Steiger, Goldstein, Mongrain & Van der Feen 1990), underscoring the necessity of differentially examining the predictive contribution across variables. In so doing, the potential importance of this study for providing a measure of elucidation pertaining to a variety of putative etiological correlates, as well as the implications for guiding treatment and intervention, is noteworthy.