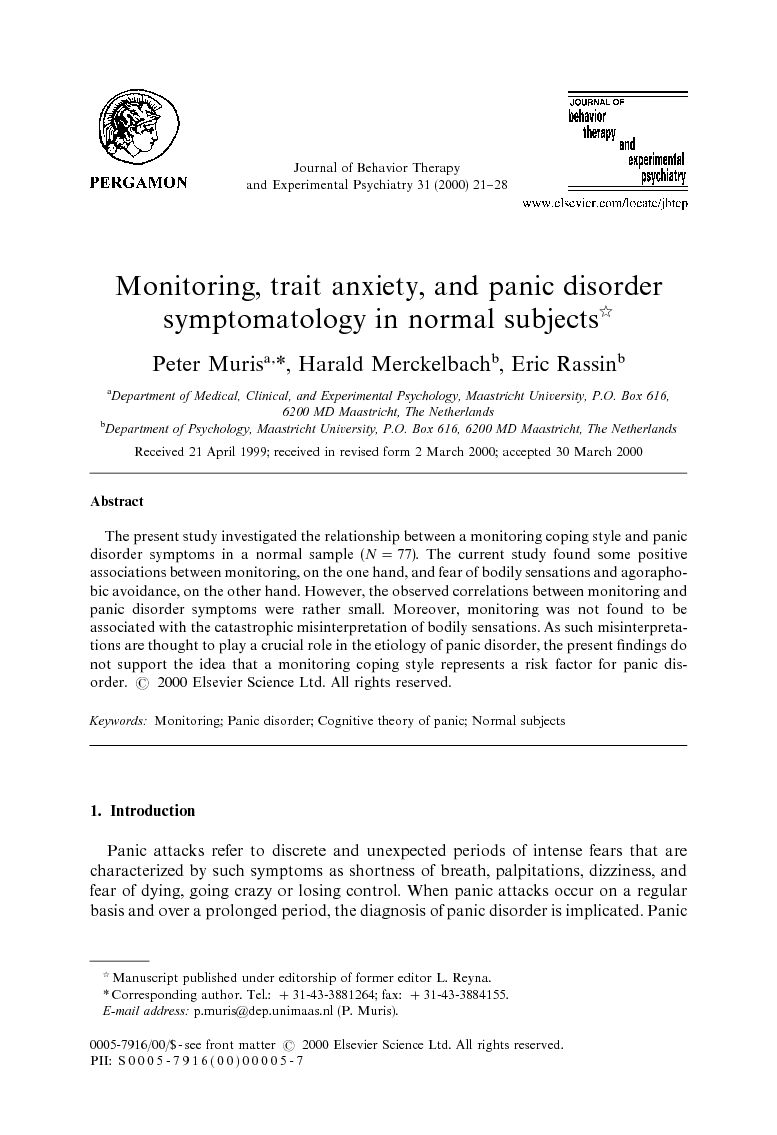 The present study investigated the relationship between a monitoring coping style and panic disorder symptoms in a normal sample (N=77). The current study found some positive associations between monitoring, on the one hand, and fear of bodily sensations and agoraphobic avoidance, on the other hand. However, the observed correlations between monitoring and panic disorder symptoms were rather small. Moreover, monitoring was not found to be associated with the catastrophic misinterpretation of bodily sensations. As such misinterpretations are thought to play a crucial role in the etiology of panic disorder, the present findings do not support the idea that a monitoring coping style represents a risk factor for panic disorder.

Panic attacks refer to discrete and unexpected periods of intense fears that are characterized by such symptoms as shortness of breath, palpitations, dizziness, and fear of dying, going crazy or losing control. When panic attacks occur on a regular basis and over a prolonged period, the diagnosis of panic disorder is implicated. Panic disorder is often complicated by agoraphobia, i.e., the phobic avoidance of public places or situations in which escape might be difficult when a panic attack occurs (American Psychiatric Association, 1994). According to the cognitive theory of Clark (1986), panic disorder arises as a consequence of catastrophic misinterpretations of bodily sensations. By this view, panic-prone individuals are hypervigilant to bodily sensations and overvalue their significance. As a consequence, these individuals become anxious which further intensifies bodily sensations of arousal. Accordingly, they become trapped in an ever-increasing spiral of bodily sensations, catastrophic misinterpretations, and anxiety which ultimately may result in a panic attack. While a number of details remain unresolved, there is now a large body of evidence indicating that the cognitive theory offers a fruitful conceptualization of the etiology of panic disorder (see, for a critical review, McNally, 1994). Monitoring refers to the extent to which an individual scans for or attends to threatening information. It is thought to represent an important index of individual differences in response to aversive stimuli or situations (see Miller, Combs & Kruus, 1993; Muris, 1994). Various studies have examined whether monitoring plays a role in how people cope with threatening life events. In general, these studies found that high monitors (i.e., individuals with a high monitoring style) display more distress and dysfunction, both physically and psychologically, than low monitors (i.e., individuals with a low monitoring style). For example, Miller and Mangan (1983) found in their sample of women who had to undergo a colposcopy, that high monitors were more anxious during anticipation, exhibited more muscular tension in the vaginal area during the examination itself, and reported more pain and discomfort on the five days following the procedure compared to low monitors. In an attempt to explain the disruptive effects of monitoring, Miller (e.g., Miller, Roussi, Caputo & Kruus, 1995; Schwartz, Lerman, Miller, Daly & Masny, 1995) formulated the Monitoring Process Model. According to this model, high and low monitors differ in their encoding of threatening situations. That is, when confronted with threat, high but not low monitors are more inclined to scan for internal and external threat cues. As a result, these cues become hyperaccessible. This process generates a high degree of intrusive ideation. In addition, high monitors tend to interpret neutral or ambiguous information as highly threatening and ruminate about this information, which, in turn, leads to exaggerated perceptions of personal risk. The high degree of intrusive ideation and perceived risk eventually results in heightened levels of anxiety and distress (see also Muris, De Jongh, Van Zuuren & Schoenmakers, 1996). Note that the Monitoring Process Model bears some resemblance to the cognitive theory of panic. Not surprisingly, some authors have proposed that monitoring might be involved in the origins of panic disorder. In Miller's (1992) words: `It is possible that monitors may be at risk for this disorder, since they appear to attend more intently to their physical symptoms and are more inclined to exaggerate their significance’ (p. 262). So far, only one study has directly addressed this issue. In that study, Baptista, Figueira, Lima and Matos (1990) examined interpretative bias phenomena in panic disorder patients and healthy control subjects. Results showed that panic disorder patients interpret ambiguous situations as more threatening than control subjects. Furthermore, panic disorder patients were found to give higher probability estimates to unpleasant events and to attribute more negative consequences to these events, especially when physiological arousal (e.g., cardiac acceleration) was involved. While monitoring appeared to be positively associated with the overprediction of threat, this association was restricted to those unpleasant events that were not related to physiological arousal. Thus, the Baptista et al. (1990) study found only partial support for the idea that monitoring is involved in the development of panic disorder. Trait anxiety is another psychological concept that seems to be closely linked to monitoring. According to Eysenck (1992), high trait anxious individuals are characterized by hypervigilance, that is, an increased attention for threat-related stimuli. Note that hypervigilance is thought to be an important concomitant of the monitoring coping style (cf. supra; Krohne, 1993). Yet, despite this similarity, studies have consistently failed to obtain significant correlations between monitoring and trait anxiety (e.g., Miller & Mangan, 1983). While the precise role of monitoring in the etiology of pathological anxiety awaits clarification, trait anxiety is generally considered to be a vulnerability factor for anxiety symptoms including panic disorder (e.g., Eysenck, 1992; Rachman, 1998). The current study sought to explore the relationship between monitoring and panic disorder symptomatology in a normal sample. Seventy-seven female undergraduate students completed the Miller Behavioral Style Scale (MBSS; Miller, 1987), an instrument that intends to measure monitoring coping style, and several panic-related scales. Subjects also completed the trait anxiety scale of the Spielberger State-Trait Anxiety Inventory (STAI-trait; Spielberger, 1983). The major aim of the study was to investigate the hypothesis that monitoring is substantially related to panic disorder symptoms even when controlling for levels of trait anxiety. More specifically, it was tested whether monitoring is, indeed, positively associated with fear of bodily cues, catastrophic misinterpretation of such sensations, and agoraphobic symptoms.