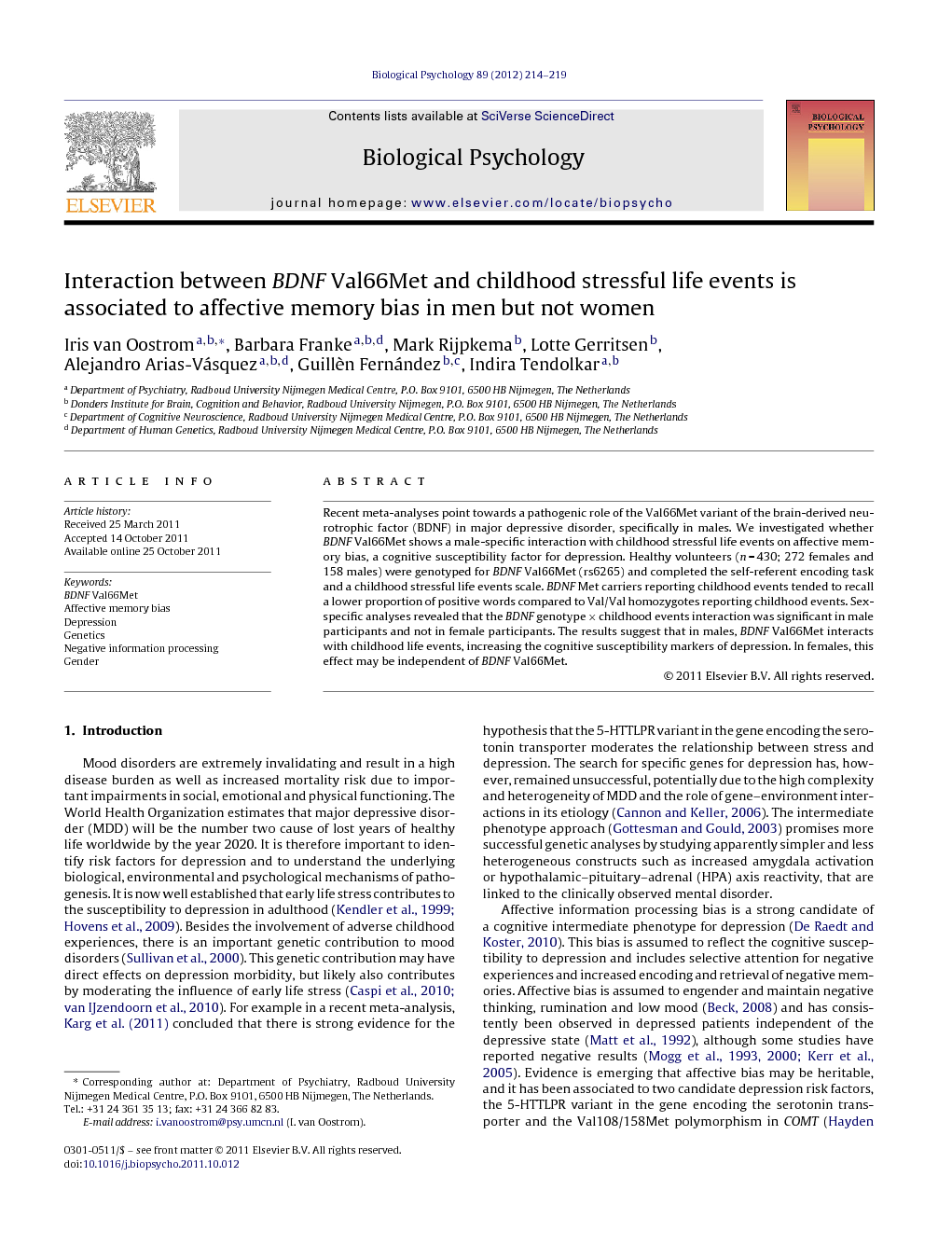 Recent meta-analyses point towards a pathogenic role of the Val66Met variant of the brain-derived neurotrophic factor (BDNF) in major depressive disorder, specifically in males. We investigated whether BDNF Val66Met shows a male-specific interaction with childhood stressful life events on affective memory bias, a cognitive susceptibility factor for depression. Healthy volunteers (n = 430; 272 females and 158 males) were genotyped for BDNF Val66Met (rs6265) and completed the self-referent encoding task and a childhood stressful life events scale. BDNF Met carriers reporting childhood events tended to recall a lower proportion of positive words compared to Val/Val homozygotes reporting childhood events. Sex-specific analyses revealed that the BDNF genotype × childhood events interaction was significant in male participants and not in female participants. The results suggest that in males, BDNF Val66Met interacts with childhood life events, increasing the cognitive susceptibility markers of depression. In females, this effect may be independent of BDNF Val66Met.

Mood disorders are extremely invalidating and result in a high disease burden as well as increased mortality risk due to important impairments in social, emotional and physical functioning. The World Health Organization estimates that major depressive disorder (MDD) will be the number two cause of lost years of healthy life worldwide by the year 2020. It is therefore important to identify risk factors for depression and to understand the underlying biological, environmental and psychological mechanisms of pathogenesis. It is now well established that early life stress contributes to the susceptibility to depression in adulthood (Kendler et al., 1999 and Hovens et al., 2009). Besides the involvement of adverse childhood experiences, there is an important genetic contribution to mood disorders (Sullivan et al., 2000). This genetic contribution may have direct effects on depression morbidity, but likely also contributes by moderating the influence of early life stress (Caspi et al., 2010 and van IJzendoorn et al., 2010). For example in a recent meta-analysis, Karg et al. (2011) concluded that there is strong evidence for the hypothesis that the 5-HTTLPR variant in the gene encoding the serotonin transporter moderates the relationship between stress and depression. The search for specific genes for depression has, however, remained unsuccessful, potentially due to the high complexity and heterogeneity of MDD and the role of gene–environment interactions in its etiology (Cannon and Keller, 2006). The intermediate phenotype approach (Gottesman and Gould, 2003) promises more successful genetic analyses by studying apparently simpler and less heterogeneous constructs such as increased amygdala activation or hypothalamic–pituitary–adrenal (HPA) axis reactivity, that are linked to the clinically observed mental disorder. Affective information processing bias is a strong candidate of a cognitive intermediate phenotype for depression (De Raedt and Koster, 2010). This bias is assumed to reflect the cognitive susceptibility to depression and includes selective attention for negative experiences and increased encoding and retrieval of negative memories. Affective bias is assumed to engender and maintain negative thinking, rumination and low mood (Beck, 2008) and has consistently been observed in depressed patients independent of the depressive state (Matt et al., 1992), although some studies have reported negative results (Mogg et al., 1993, Mogg et al., 2000 and Kerr et al., 2005). Evidence is emerging that affective bias may be heritable, and it has been associated to two candidate depression risk factors, the 5-HTTLPR variant in the gene encoding the serotonin transporter and the Val108/158Met polymorphism in COMT ( Hayden et al., 2007, Williams et al., 2010, Thomason et al., 2010 and Perez-Edgar et al., 2010). Affective bias in information procession seems state-independent; it has been observed in patients in remission ( Bhagwagar et al., 2004, Joormann and Gotlib, 2007 and Ramel et al., 2007) and in highly neurotic, never-depressed individuals ( Chan et al., 2007), who are at increased risk of depression. Affective bias has furthermore been found in never-depressed family members of MDD patients at a higher rate than in the general population ( Jaenicke et al., 1987, Joormann et al., 2007 and Taylor and Ingram, 1999) underlining its potential as an intermediate phenotype. The depression candidate gene encoding the brain-derived neurotrophic factor, BDNF, and its functional variant Val66Met (rs6265) ( Chen et al., 2004), may be of particular interest in relation to affective memory processing bias. BDNF codes for a neurotrophin that exerts long-term effects on neuronal survival, migration and growth. A large body of evidence supports the involvement of BDNF Val66Met in stress-sensitivity, depressive states and the development of brain structures that are implicated in emotional processing and depression, like the hippocampus, amygdala and anterior cingulate cortex ( Gatt et al., 2007, Urani et al., 2005, Van Wingen et al., 2010, Joffe et al., 2009 and Shirayama et al., 2002). These brain structures mature late and may therefore be more susceptible to adverse events in childhood. Recent studies have found that in BDNF Met allele carriers who had a history of childhood stressful life events, these brain structures are reduced in grey matter volume ( Scharinger et al., 2010 and Gerritsen et al., 2011) and show greater responses to emotional tasks ( Montag et al., 2008, Schofield et al., 2009 and Lau et al., 2010), compared to Val homozygotes. This evidence suggests a role of the BDNF genotype in regulating the effect of childhood stress on brain structures that are involved in emotional processing and in conferring the susceptibility to depression via its effect on affective information processing biases. Despite this evidence, no direct relationship between BDNF Val66Met and major depression was found in a meta-analysis including 2821 depressed patients and 10,843 non-depressed controls ( Verhagen et al., 2010). The Val66Met variant turned out to be significantly associated with depression in men, but not in women. One proposed explanation for this gender-specificity is the effect of estrogen on BDNF synthesis ( Scharfman and Maclusky, 2005). Most studies addressing the relationship between estrogen and BDNF expression have found that estrogen up-regulates protein expression of BDNF in the brain ( Numakawa et al., 2010). Estrogen may therefore have protective effects in the regulation of the effects of stress and BDNF levels in the brain. In sum, current evidence suggests that BDNF Val66Met may interact with early life stress in affecting brain development as well as increased susceptibility to depression. These effects may be different for men and women, since the increased depression risk is observed specifically in males and estrogen regulates BDNF expression in the brain. As empirical evidence is lacking for this hypothesis, we set out to use an intermediate phenotype approach by studying the contribution of BDNF Val66Met and childhood stressful life events to the cognitive susceptibility to depression, especially affective memory bias, in a large sample of healthy individuals. We hypothesized that childhood life events would be associated with a greater negative memory bias and a smaller positive memory bias in both men and women. Furthermore, we expected BDNF Met carriers reporting childhood stress, and especially men, to demonstrate particularly increased negative memory bias and smaller positive memory bias.