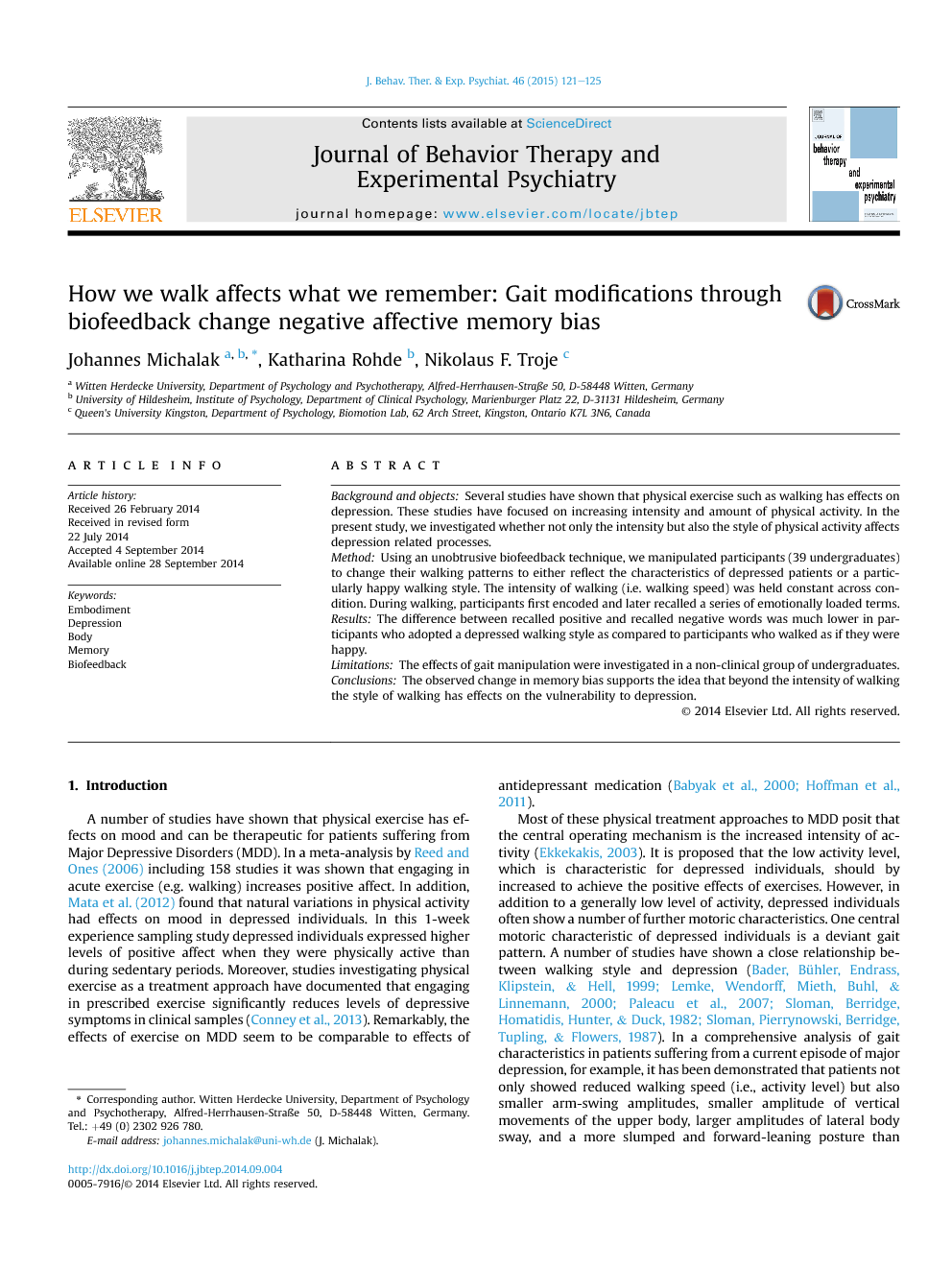 Background and objects Several studies have shown that physical exercise such as walking has effects on depression. These studies have focused on increasing intensity and amount of physical activity. In the present study, we investigated whether not only the intensity but also the style of physical activity affects depression related processes. Method Using an unobtrusive biofeedback technique, we manipulated participants (39 undergraduates) to change their walking patterns to either reflect the characteristics of depressed patients or a particularly happy walking style. The intensity of walking (i.e. walking speed) was held constant across condition. During walking, participants first encoded and later recalled a series of emotionally loaded terms. Results The difference between recalled positive and recalled negative words was much lower in participants who adopted a depressed walking style as compared to participants who walked as if they were happy. Limitations The effects of gait manipulation were investigated in a non-clinical group of undergraduates. Conclusions The observed change in memory bias supports the idea that beyond the intensity of walking the style of walking has effects on the vulnerability to depression.

A number of studies have shown that physical exercise has effects on mood and can be therapeutic for patients suffering from Major Depressive Disorders (MDD). In a meta-analysis by Reed and Ones (2006) including 158 studies it was shown that engaging in acute exercise (e.g. walking) increases positive affect. In addition, Mata et al. (2012) found that natural variations in physical activity had effects on mood in depressed individuals. In this 1-week experience sampling study depressed individuals expressed higher levels of positive affect when they were physically active than during sedentary periods. Moreover, studies investigating physical exercise as a treatment approach have documented that engaging in prescribed exercise significantly reduces levels of depressive symptoms in clinical samples (Conney et al., 2013). Remarkably, the effects of exercise on MDD seem to be comparable to effects of antidepressant medication (Babyak et al., 2000 and Hoffman et al., 2011). Most of these physical treatment approaches to MDD posit that the central operating mechanism is the increased intensity of activity (Ekkekakis, 2003). It is proposed that the low activity level, which is characteristic for depressed individuals, should by increased to achieve the positive effects of exercises. However, in addition to a generally low level of activity, depressed individuals often show a number of further motoric characteristics. One central motoric characteristic of depressed individuals is a deviant gait pattern. A number of studies have shown a close relationship between walking style and depression (Bader et al., 1999, Lemke et al., 2000, Paleacu et al., 2007, Sloman et al., 1982 and Sloman et al., 1987). In a comprehensive analysis of gait characteristics in patients suffering from a current episode of major depression, for example, it has been demonstrated that patients not only showed reduced walking speed (i.e., activity level) but also smaller arm-swing amplitudes, smaller amplitude of vertical movements of the upper body, larger amplitudes of lateral body sway, and a more slumped and forward-leaning posture than healthy controls (Michalak et al., 2009). An analysis of speed dependent changes in gait parameters in non-clinical samples (Thorstensson, Nilsson, Carlson, & Zomlefer, 1984) makes it unlikely that gait characteristics of depressed patients are solely attributable to reduced walking speed (i.e., the intensity of walking). A large body of basic research points to the fact that not only changes in general activity level but also more subtle motoric changes can have profound effects on emotional information processing. Under the term ‘embodiment’ numerous studies have shown a complex and reciprocal relationship between the bodily expression of emotion and the way in which emotional information is processed (Niedenthal, 2007 and Niedenthal et al., 2005). The fact that emotional processes affect bodily states seems to be almost trivial. Obviously, emotions are expressed by the facial muscular system, but also in the static posture and dynamic activity of the whole body (Oberman et al., 2007 and Pitcher et al., 2008). More interesting are demonstrations of causal relations in the other direction. Diverse affective and cognitive processes are affected by manipulations of the muscular-skeletal system. For instance, in a seminal study Strack, Martin, and Stepper (1988) asked participants to hold a pen between their teeth, which forced them to contract the zygomaticus major muscle that is normally involved in the production of a smile. They found that the participants enjoyed cartoons more than those who were prevented from making zygomaticus contractions. Similarly, Stepper and Strack (1993) demonstrated that a slumped versus an upright sitting posture affected the way participants perceived positive feedback on a previously completed achievement test. Bodily processes can also influence affective memory. Riskind (1983) showed that certain postures affected the ease with which participants were able to recall either pleasant or unpleasant life experience and Förster and Strack (1996) demonstrated that nodding or shaking the head influences a person's recall of positive and negative words. Although basic research on embodiment effects on emotional information processing is flourishing, research on the effects of motoric system on processes relevant for psychopathological phenomena is largely lacking. In the current study, we manipulated participants' gait to adopt features reflecting the characteristics of happy or depressed walking behaviour using a biofeedback method. We then measured how many negative and positive words participants recalled from a previously presented list of items. Biased processing of self-referent material is one of the most intensively studied cognitive-affective correlates of depression. A large body of research has found that depression affects how information about oneself is processed, as evidenced by enhanced encoding and recall of negative self-referent material and by a reduced processing of positive information (Mathews and MacLeod, 2005, Matt et al., 1992 and Williams et al., 1997). We expected to observe a memory bias such that manipulating the participants to walk in a more depressed way would shift recall towards relatively more negative words, and making them walk happier would bias them towards remembering relatively more positive words. Walking speed was held constant across conditions to rule out that mere differences in activity level are responsible for group differences in memory bias. We choose memory bias as our primary outcome variable because we expected that the relatively short time gait changes we aimed to induce would have effects on more subtle emotional information processes (i.e., memory bias), before effects on conscious experienced affective states could be detected. However, we also assessed the conscious affective state in order to investigate whether the linkage between motor behavior and affective processes was mediated by the explicit experience of affective states or whether the sensorimotor system can affect these functions directly before effects on conscious affect become apparent.