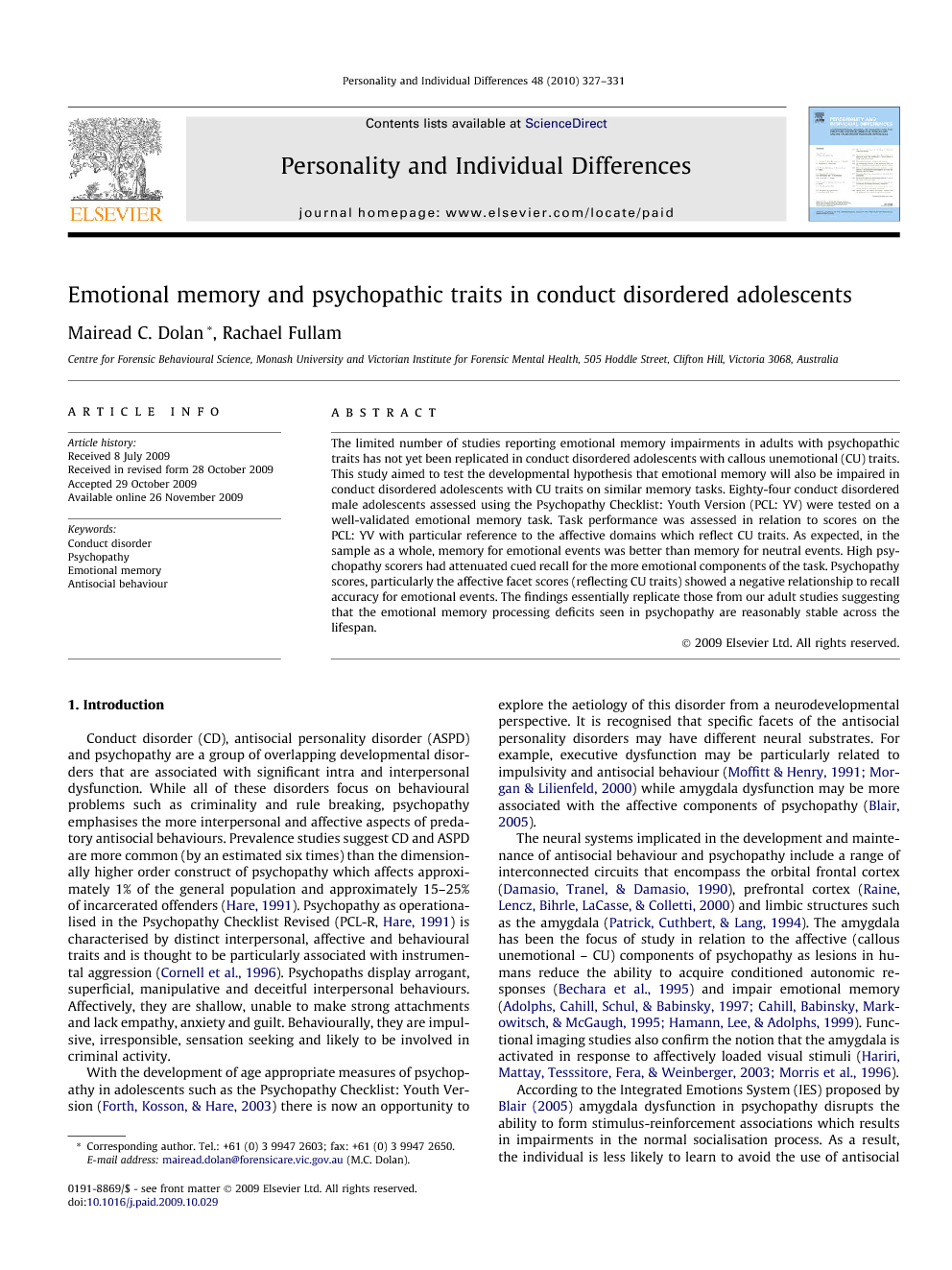 The limited number of studies reporting emotional memory impairments in adults with psychopathic traits has not yet been replicated in conduct disordered adolescents with callous unemotional (CU) traits. This study aimed to test the developmental hypothesis that emotional memory will also be impaired in conduct disordered adolescents with CU traits on similar memory tasks. Eighty-four conduct disordered male adolescents assessed using the Psychopathy Checklist: Youth Version (PCL: YV) were tested on a well-validated emotional memory task. Task performance was assessed in relation to scores on the PCL: YV with particular reference to the affective domains which reflect CU traits. As expected, in the sample as a whole, memory for emotional events was better than memory for neutral events. High psychopathy scorers had attenuated cued recall for the more emotional components of the task. Psychopathy scores, particularly the affective facet scores (reflecting CU traits) showed a negative relationship to recall accuracy for emotional events. The findings essentially replicate those from our adult studies suggesting that the emotional memory processing deficits seen in psychopathy are reasonably stable across the lifespan.

Conduct disorder (CD), antisocial personality disorder (ASPD) and psychopathy are a group of overlapping developmental disorders that are associated with significant intra and interpersonal dysfunction. While all of these disorders focus on behavioural problems such as criminality and rule breaking, psychopathy emphasises the more interpersonal and affective aspects of predatory antisocial behaviours. Prevalence studies suggest CD and ASPD are more common (by an estimated six times) than the dimensionally higher order construct of psychopathy which affects approximately 1% of the general population and approximately 15–25% of incarcerated offenders (Hare, 1991). Psychopathy as operationalised in the Psychopathy Checklist Revised (PCL-R, Hare, 1991) is characterised by distinct interpersonal, affective and behavioural traits and is thought to be particularly associated with instrumental aggression (Cornell et al., 1996). Psychopaths display arrogant, superficial, manipulative and deceitful interpersonal behaviours. Affectively, they are shallow, unable to make strong attachments and lack empathy, anxiety and guilt. Behaviourally, they are impulsive, irresponsible, sensation seeking and likely to be involved in criminal activity. With the development of age appropriate measures of psychopathy in adolescents such as the Psychopathy Checklist: Youth Version (Forth, Kosson, & Hare, 2003) there is now an opportunity to explore the aetiology of this disorder from a neurodevelopmental perspective. It is recognised that specific facets of the antisocial personality disorders may have different neural substrates. For example, executive dysfunction may be particularly related to impulsivity and antisocial behaviour (Moffitt and Henry, 1991 and Morgan and Lilienfeld, 2000) while amygdala dysfunction may be more associated with the affective components of psychopathy (Blair, 2005). The neural systems implicated in the development and maintenance of antisocial behaviour and psychopathy include a range of interconnected circuits that encompass the orbital frontal cortex (Damasio, Tranel, & Damasio, 1990), prefrontal cortex (Raine, Lencz, Bihrle, LaCasse, & Colletti, 2000) and limbic structures such as the amygdala (Patrick, Cuthbert, & Lang, 1994). The amygdala has been the focus of study in relation to the affective (callous unemotional – CU) components of psychopathy as lesions in humans reduce the ability to acquire conditioned autonomic responses (Bechara et al., 1995) and impair emotional memory (Adolphs et al., 1997, Cahill et al., 1995 and Hamann et al., 1999). Functional imaging studies also confirm the notion that the amygdala is activated in response to affectively loaded visual stimuli (Hariri et al., 2003 and Morris et al., 1996). According to the Integrated Emotions System (IES) proposed by Blair (2005) amygdala dysfunction in psychopathy disrupts the ability to form stimulus-reinforcement associations which results in impairments in the normal socialisation process. As a result, the individual is less likely to learn to avoid the use of antisocial behaviour to achieve their goals but instead may learn to use antisocial behaviour instrumentally to achieve their desires. That is, they may receive the potential rewards, e.g., financial gain, without the feelings of guilt over the victim’s distress. The IES model also makes a distinction between reactive and instrumental aggression and suggests that reactive (impulsive) aggression may be more associated with orbital/ventrolateral prefrontal cortical dysfunction, while amygdala dysfunction may be associated with instrumental aggression, which is seen as an important potentially distinguishing feature of psychopathy. There are now a number of studies that suggest the affective (CU traits) deficits seen in psychopathy are associated with impairments in processing the emotional significance of negatively valenced stimuli (Day and Wong, 1996 and Patrick et al., 1994) and with deficits in face affect recognition (Marsh & Blair, 2008) particularly for sadness, fear and disgust. Impairments in the processing of emotional words have also been reported in psychopathic populations (Day and Wong, 1996 and Williamson et al., 1991). Support for the notion that amygdala dysfunction may account for the CU components of psychopathy comes from fMRI studies in both adults (Birbaumer et al., 2005, Deeley et al., 2006 and Kiehl et al., 2001) and children (Marsh et al., 2008). Furthermore, there is evidence of structural alterations in the basolateral, lateral, cortical, and central nuclei of the amygdala in psychopathic populations (Yang, Raine, Narr, Colletti, & Toga, 2009). To date, there have only been two studies examining memory for emotional material in adult antisocial samples despite evidence that emotional memory is associated with amygdala function (Cahill et al., 1995). Both reported attenuated memory for emotional material in those with psychopathic traits (Christianson et al., 1996 and Dolan and Fullam, 2005). The latter studies did not specifically examine the key components of psychopathy that may have been more pertinent, e.g., CU traits or deficient affective experience (Cooke, Michie, Hart, & Clark, 2004) to the study of emotional information processing. The present study examined psychopathy related attenuation of emotional memory in a cohort of CD adolescents who were assessed on the PCL: YV. We hypothesised that if psychopathy is a developmental construct then the deficits seen in adults with psychopathic traits (particularly CU traits) should also be apparent in samples with CD who have been screened to the same degree for confounds as our original sample of ASPD adults (Dolan & Fullam, 2005).