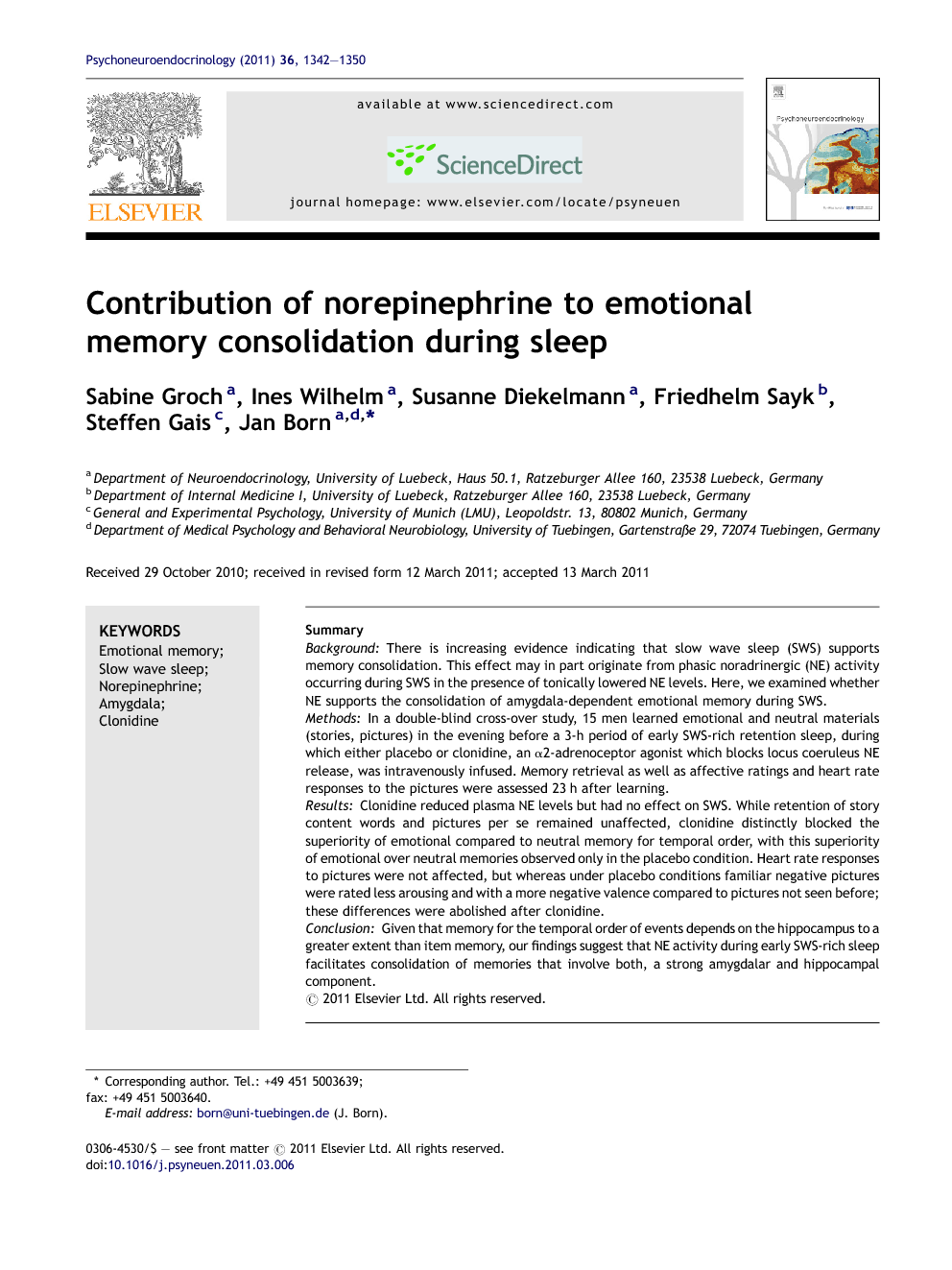 Background There is increasing evidence indicating that slow wave sleep (SWS) supports memory consolidation. This effect may in part originate from phasic noradrinergic (NE) activity occurring during SWS in the presence of tonically lowered NE levels. Here, we examined whether NE supports the consolidation of amygdala-dependent emotional memory during SWS. Methods In a double-blind cross-over study, 15 men learned emotional and neutral materials (stories, pictures) in the evening before a 3-h period of early SWS-rich retention sleep, during which either placebo or clonidine, an α2-adrenoceptor agonist which blocks locus coeruleus NE release, was intravenously infused. Memory retrieval as well as affective ratings and heart rate responses to the pictures were assessed 23 h after learning. Results Clonidine reduced plasma NE levels but had no effect on SWS. While retention of story content words and pictures per se remained unaffected, clonidine distinctly blocked the superiority of emotional compared to neutral memory for temporal order, with this superiority of emotional over neutral memories observed only in the placebo condition. Heart rate responses to pictures were not affected, but whereas under placebo conditions familiar negative pictures were rated less arousing and with a more negative valence compared to pictures not seen before; these differences were abolished after clonidine. Conclusion Given that memory for the temporal order of events depends on the hippocampus to a greater extent than item memory, our findings suggest that NE activity during early SWS-rich sleep facilitates consolidation of memories that involve both, a strong amygdalar and hippocampal component.

Sleep is known to support memory consolidation (Maquet, 2001 and Stickgold, 2005). However, the underlying mechanisms are unclear. Declarative memory predominantly benefits from early sleep with high amounts of slow wave sleep (SWS; Peigneux et al., 2001 and Diekelmann et al., 2009). During SWS, reactivation of previously learned materials is assumed to strengthen memories by promoting the redistribution of the new representations from hippocampal preferentially to neocortical circuitry for long-term storage (McClelland et al., 1995, Buzsaki, 1998 and Diekelmann and Born, 2010). Such processes of sleep-dependent consolidation have been shown to critically depend on characteristic changes in neurotransmitter and hormone release during sleep, e.g., acetylcholine and cortisol (Born et al., 1999, Born and Wagner, 2004 and Gais and Born, 2004). Norepinephrine (NE) likewise displays a pronounced sleep-dependent regulation and is well-known to be functionally implicated in memory consolidation, especially of emotional memory (van Stegeren, 2008 and McGaugh and Roozendaal, 2008). Compared to wakefulness, NE levels distinctly decrease during SWS and reach minimum concentrations during rapid eye movement (REM) sleep (Aston-Jones and Cohen, 2005 and Rasch et al., 2007). The locus coeruleus (LC), which is the main source of cortical NE, projects to multiple brain areas including amygdala, hippocampus and neocortical areas (Young, 1993 and Petrovich et al., 2001). Although LC activity rapidly declines after sleep onset, transient firing bursts were detected in LC neurons in rats during SWS (Aston-Jones and Bloom, 1981), which appeared to occur in response to preceding learning-related episodes, possibly in conjunction with reactivation of the learned materials (Eschenko and Sara, 2008). In humans, suppression of NE release by the α2-adrenoceptor agonist clonidine during SWS-rich retention sleep impaired consolidation of odor memories, whereas the noradrenergic reuptake inhibitor reboxetin improved consolidation (Gais et al., 2011). Like for emotional memories, storage of odors critically involves the amygdala, together with hippocampal function (Gall et al., 1998 and Li et al., 2006). Concurrent activation of amygdala and hippocampus via direct and indirect NE pathways appears to be critical for the formation of emotional, episodic and odor memories (Petrovich et al., 2001 and Strange and Dolan, 2004). Yet, the role of NE for consolidating emotional memory during sleep has not been investigated so far. Here, we tested whether suppression of NE impairs memory consolidation during early SWS-rich sleep, particularly of emotional memories. For this purpose, we measured effects of clonidine, infused to generally suppress noradrenergic output from LC, on retention of the contents of and on the temporal order in neutral and emotional stories across 3-h periods of early SWS-rich sleep. Additionally, we assessed retention of emotional and neutral pictures and corresponding subjective ratings as well as heart rate responses.