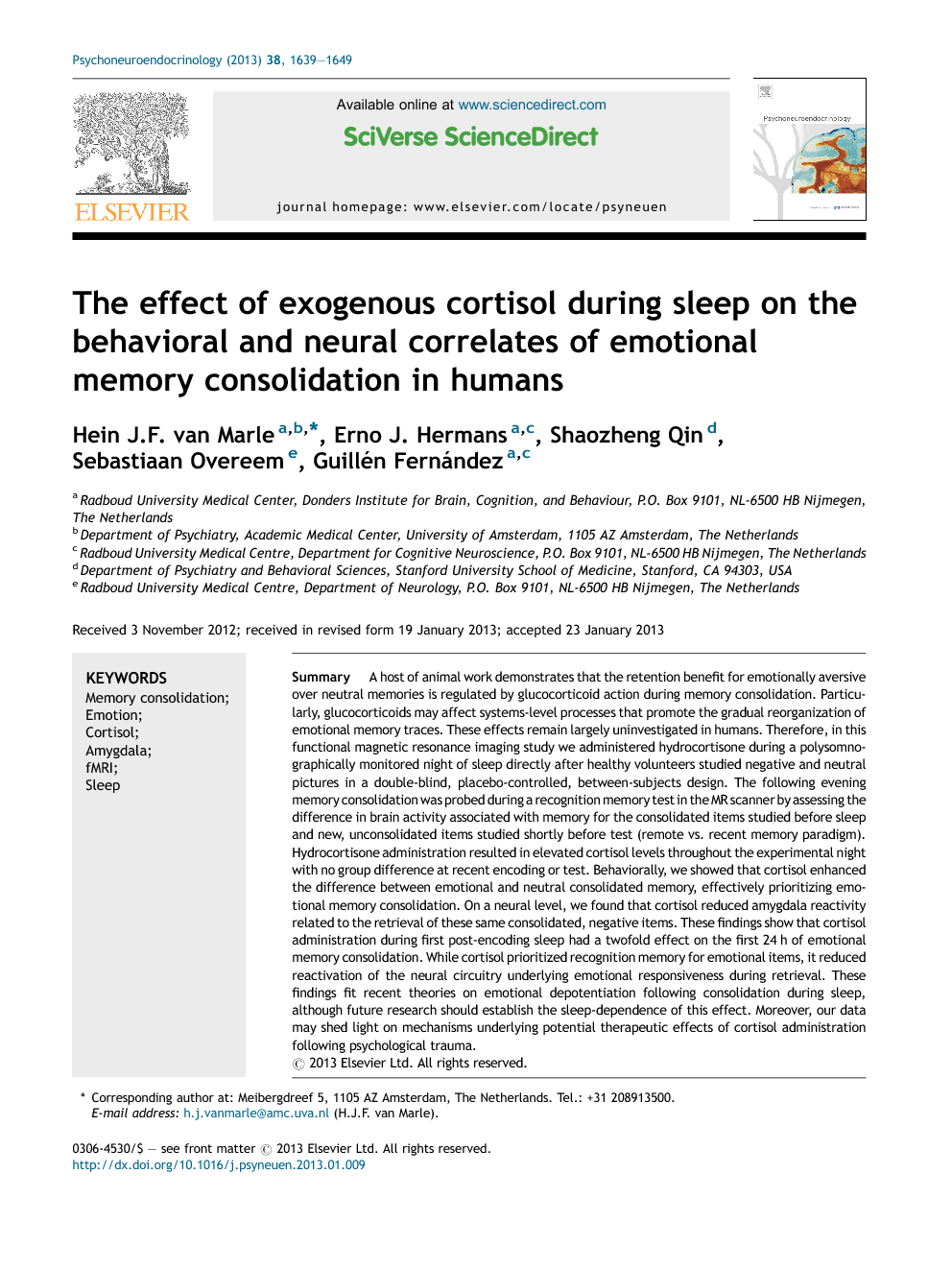 A host of animal work demonstrates that the retention benefit for emotionally aversive over neutral memories is regulated by glucocorticoid action during memory consolidation. Particularly, glucocorticoids may affect systems-level processes that promote the gradual reorganization of emotional memory traces. These effects remain largely uninvestigated in humans. Therefore, in this functional magnetic resonance imaging study we administered hydrocortisone during a polysomnographically monitored night of sleep directly after healthy volunteers studied negative and neutral pictures in a double-blind, placebo-controlled, between-subjects design. The following evening memory consolidation was probed during a recognition memory test in the MR scanner by assessing the difference in brain activity associated with memory for the consolidated items studied before sleep and new, unconsolidated items studied shortly before test (remote vs. recent memory paradigm). Hydrocortisone administration resulted in elevated cortisol levels throughout the experimental night with no group difference at recent encoding or test. Behaviorally, we showed that cortisol enhanced the difference between emotional and neutral consolidated memory, effectively prioritizing emotional memory consolidation. On a neural level, we found that cortisol reduced amygdala reactivity related to the retrieval of these same consolidated, negative items. These findings show that cortisol administration during first post-encoding sleep had a twofold effect on the first 24 h of emotional memory consolidation. While cortisol prioritized recognition memory for emotional items, it reduced reactivation of the neural circuitry underlying emotional responsiveness during retrieval. These findings fit recent theories on emotional depotentiation following consolidation during sleep, although future research should establish the sleep-dependence of this effect. Moreover, our data may shed light on mechanisms underlying potential therapeutic effects of cortisol administration following psychological trauma.

A striking and adaptive feature of human memory is its propensity to prioritize biologically salient over emotionally neutral information (Hamann, 2001 and LaBar and Cabeza, 2006). An established animal literature posits that this emotional enhancement effect is at least partly related to neuromodulatory action during memory consolidation (McGaugh and Roozendaal, 2002). Stress hormones like cortisol (corticosterone in rats) are, together with stress-related neurotransmitters like norepinephrine, thought to exert their modulatory effect through potentiation of the amygdala. The amygdala subsequently modulates mnemonic processing in the hippocampus and other brain regions (McGaugh, 2004). Although well established in animals, these effects remain relatively uninvestigated in humans, despite recent reports on a possible role for glucocorticoids in the prevention of traumatic memory (de Quervain et al., 2009). During memory consolidation, initially fragile memory traces are reorganized and integrated into long-term storage (Müller and Pilzecker, 1900, Marr, 1970 and McGaugh, 2000). This process occurs when awake, but is particularly facilitated during sleep (Stickgold, 2005 and Diekelmann and Born, 2010). In case of emotional memory, current theories suggest that this consolidation process additionally serves to reduce the affective tone of the memory trace by integrating it into conceptualized, semantic networks (Walker and van der Helm, 2009). Within neuroimaging, memory consolidation is often probed by measuring the outcome of consolidation during retrieval, for instance using a remote versus recent memory paradigm (Takashima et al., 2006). Previous studies using similar designs have shown that the emotional enhancement effect of memory develops progressively over consolidation (Nishida et al., 2009), and that the retrieval of consolidated emotional memories engages the amygdala and hippocampus (Dolcos et al., 2005 and Sterpenich et al., 2009). However, none of these studies consider the role of cortisol. On a behavioral level, several studies have suggested a facilitatory role of cortisol in (emotional) memory consolidation (Buchanan and Lovallo, 2001, Cahill et al., 2003, Maheu et al., 2004, Abercrombie et al., 2006, Kuhlmann and Wolf, 2006 and Payne et al., 2007, but see: Wagner et al., 2005b, and see Lupien et al., 2007 and de Quervain et al., 2009 for reviews). However, these findings are either complicated by concomitant drug effects on encoding, or related to other stress-induced neuromodulatory changes in addition to cortisol, most importantly norepinephrine. A recent study by Wilhelm and colleagues did study the isolated effect of cortisol on consolidation, but only found an effect on relational (and not item) memory of neutral text material (Wilhelm et al., 2011). Thus, it remains unknown to what extent the reorganization of emotional memory traces as a result of prioritized memory consolidation directly depends on cortisol. We assessed the effect of hydrocortisone administration on the consolidation of negative and neutral pictures studied just prior to polysomnographically monitored sleep (remote set), in a double-blind, placebo-controlled, between-subjects design. Memory consolidation was probed the following evening during a recognition memory test in the MR scanner by assessing the difference in memory performance and brain activity for the ‘remote’ items and new, ‘recent’ items studied just prior to test. We administered hydrocortisone after learning and just before sleep, because processes underlying memory consolidation are thought to take place most prominently, although not exclusively, during sleep (Diekelmann and Born, 2010). Remote items thus transitioned through a phase of memory consolidation during sleep, which in the cortisol group was accompanied by elevated cortisol levels. In contrast, recent items were neither consolidated, nor affected by the cortisol manipulation. Note that although this experimental setup targets memory consolidation during sleep, it cannot establish sleep dependence. We did not include a non-sleep condition at a different time of day or a sleep deprivation condition because such controls would be confounded by cortisol differences resulting respectively from the diurnal cycle of cortisol or sleep deprivation itself (Balbo et al., 2010). Based on extensive animal literature concerning the facilitatory role of glucocorticoids in the memory consolidation of emotionally arousing events (McGaugh and Roozendaal, 2002), we hypothesized that hydrocortisone administration during post-encoding sleep would enhance the consolidation benefit for emotional (vs. neutral) memory, which would be reflected in altered reactivation patterns of limbic circuitry during retrieval.