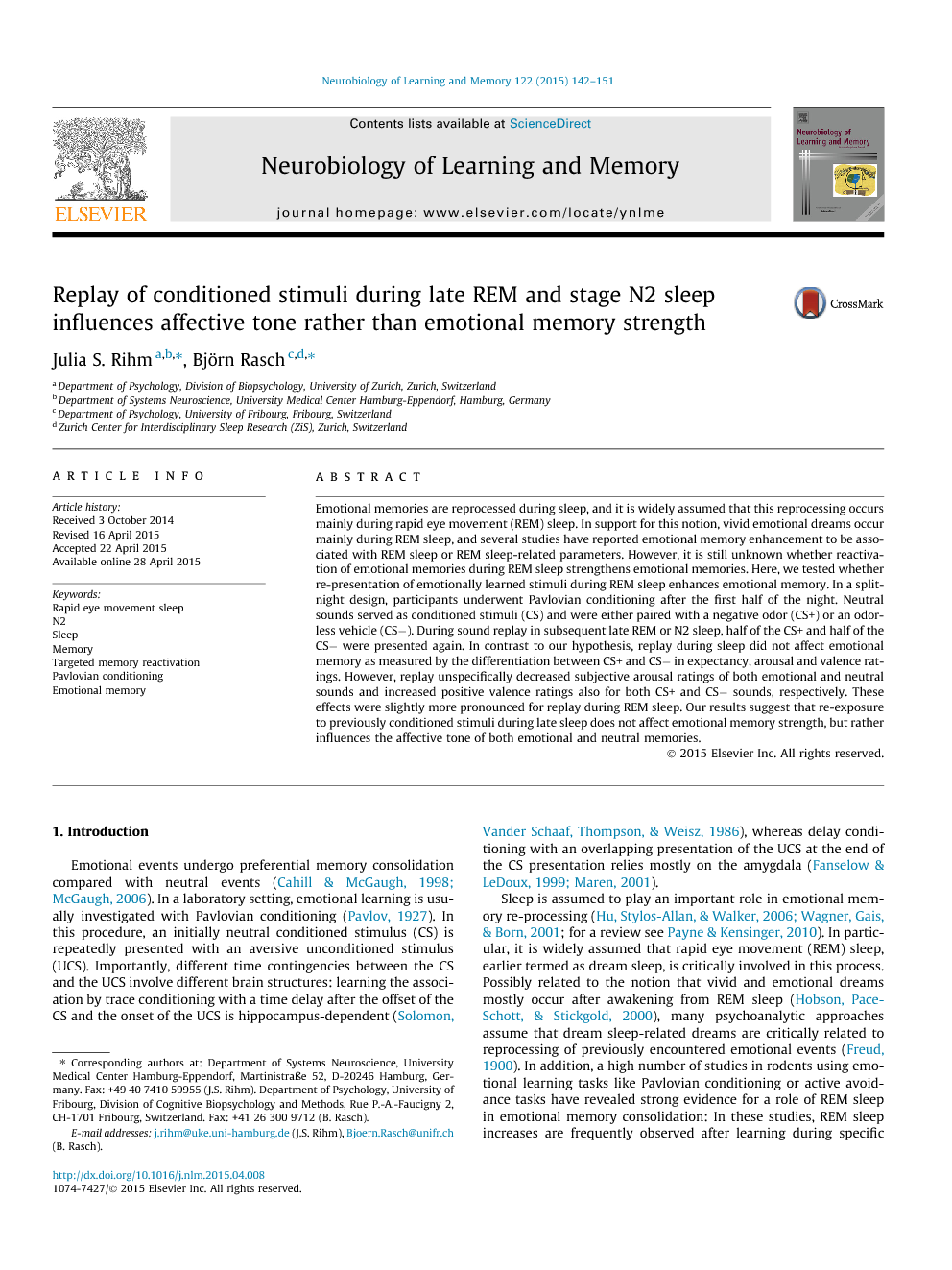 Emotional memories are reprocessed during sleep, and it is widely assumed that this reprocessing occurs mainly during rapid eye movement (REM) sleep. In support for this notion, vivid emotional dreams occur mainly during REM sleep, and several studies have reported emotional memory enhancement to be associated with REM sleep or REM sleep-related parameters. However, it is still unknown whether reactivation of emotional memories during REM sleep strengthens emotional memories. Here, we tested whether re-presentation of emotionally learned stimuli during REM sleep enhances emotional memory. In a split-night design, participants underwent Pavlovian conditioning after the first half of the night. Neutral sounds served as conditioned stimuli (CS) and were either paired with a negative odor (CS+) or an odorless vehicle (CS−). During sound replay in subsequent late REM or N2 sleep, half of the CS+ and half of the CS− were presented again. In contrast to our hypothesis, replay during sleep did not affect emotional memory as measured by the differentiation between CS+ and CS− in expectancy, arousal and valence ratings. However, replay unspecifically decreased subjective arousal ratings of both emotional and neutral sounds and increased positive valence ratings also for both CS+ and CS− sounds, respectively. These effects were slightly more pronounced for replay during REM sleep. Our results suggest that re-exposure to previously conditioned stimuli during late sleep does not affect emotional memory strength, but rather influences the affective tone of both emotional and neutral memories.

Emotional events undergo preferential memory consolidation compared with neutral events (Cahill and McGaugh, 1998 and McGaugh, 2006). In a laboratory setting, emotional learning is usually investigated with Pavlovian conditioning (Pavlov, 1927). In this procedure, an initially neutral conditioned stimulus (CS) is repeatedly presented with an aversive unconditioned stimulus (UCS). Importantly, different time contingencies between the CS and the UCS involve different brain structures: learning the association by trace conditioning with a time delay after the offset of the CS and the onset of the UCS is hippocampus-dependent (Solomon, Vander Schaaf, Thompson, & Weisz, 1986), whereas delay conditioning with an overlapping presentation of the UCS at the end of the CS presentation relies mostly on the amygdala (Fanselow and LeDoux, 1999 and Maren, 2001). Sleep is assumed to play an important role in emotional memory re-processing (Hu et al., 2006 and Wagner et al., 2001; for a review see Payne & Kensinger, 2010). In particular, it is widely assumed that rapid eye movement (REM) sleep, earlier termed as dream sleep, is critically involved in this process. Possibly related to the notion that vivid and emotional dreams mostly occur after awakening from REM sleep (Hobson, Pace-Schott, & Stickgold, 2000), many psychoanalytic approaches assume that dream sleep-related dreams are critically related to reprocessing of previously encountered emotional events (Freud, 1900). In addition, a high number of studies in rodents using emotional learning tasks like Pavlovian conditioning or active avoidance tasks have revealed strong evidence for a role of REM sleep in emotional memory consolidation: In these studies, REM sleep increases are frequently observed after learning during specific time windows and correlated with learning success, while suppressing REM during these times impaired learning (Smith, 1985 and Smith, 1996 for reviews and meta-analyses). As a possible underlying mechanism, ponto-geniculo-occipital waves occurring during REM sleep as well as reactivations on the amygdala and hippocampus level have been proposed (Datta and O’Malley, 2013 and Hennevin et al., 2007). In fact, in rodents, patterns of hippocampal memory reactivation have been observed during REM sleep (Louie and Wilson, 2001 and Poe et al., 2000), and presentations of memory cues during REM sleep activate hippocampal neurons (Maho & Bloch, 1992) and increase avoidance responses to previously conditioned stimuli (Hars, Hennevin, & Pasques, 1985). In addition to the strong evidence for the role of REM sleep in the consolidation of emotional memories in rodents, also human studies provide support for this notion. For example in split-night paradigms, emotional memory for pictures and stories was particularly enhanced after a period of late, REM sleep-rich sleep, but not after periods of early slow-wave sleep (SWS)-rich sleep (Groch et al., 2013, Wagner et al., 2002 and Wagner et al., 2001). Furthermore, the deprivation of REM sleep led to less emotional-laden memory of stories (Greenberg, Pearlman, Schwartz, & Grossman, 1983) and changes in REM sleep are often involved in disorders affecting emotional processing (Tsuno, Besset, & Ritchie, 2005). In addition, several studies have reported positive correlations with REM sleep-related parameters and memory for emotional information (Baran et al., 2012, Menz et al., 2013, Nishida et al., 2009 and Payne et al., 2012). According to a recent theoretical account, emotional memories are reactivated during REM sleep by covert amygdaloid reactivations, causing a strengthening of the declarative, informational content of the memory and a decrease of the emotional reactivity to this memory (Van der Helm et al., 2011 and Walker and van der Helm, 2009, although see Baran et al., 2012; see Rasch & Born, 2013 for a review). While an association between REM sleep and emotional memory appears to be well-established in rodents, experimental evidence for a critical role of emotional memory reactivation during REM sleep for consolidation processes is still scarce in humans. Induced memory reactivation during REM sleep has been shown to improve performance in complex logical tasks (Smith & Weeden, 1990) as well as generalization of sound-face associations (Sterpenich et al., 2014), while no behavioral effects of targeted memory reactivation with respect to the emotionality of the associated faces (i.e., negative vs. neutral) were reported in the latter study. For neutral declarative memory tasks, targeted memory reactivation during REM sleep is ineffective (Cordi et al., 2014 and Rasch et al., 2007). In fact, recent studies revealed evidence that emotional memories could be influenced by reactivation in SWS during midday naps (Cairney et al., 2014 and Hauner et al., 2013), but these studies did not include a REM sleep condition. Thus, it still remains an open question if re-exposure to emotional memories during REM sleep can affect emotional memory performance after sleep in humans. To test this question, we used a between-subject, split-night design where participants slept during the first half of the night, were awoken to undergo hippocampus-independent Pavlovian delay conditioning after the first half and slept again during the second half. During conditioning learning, half of the neutral sounds were associated with a negative odor (UCS) and the other half with an odorless vehicle, resulting in CS+ (sounds followed by the odor) and CS− (sounds followed by the odorless vehicle). During subsequent sleep in the second half of the night, half of the sounds that were previously learned as negative (CS+) and half of the sounds that were previously learned as neutral (CS−) were replayed without the odor or the odorless vehicle, respectively. The target sleep stages for sound re-presentation differed between two groups – REM sleep or N2 sleep as control. Recall took place 36 h later, after a recovery night. We hypothesized that replay of the CS+ during REM sleep will result in enhanced memory for this association compared with replay during N2 sleep, expressed in higher odor expectancy, higher physiological reactivity, and higher subjective affective reactivity.