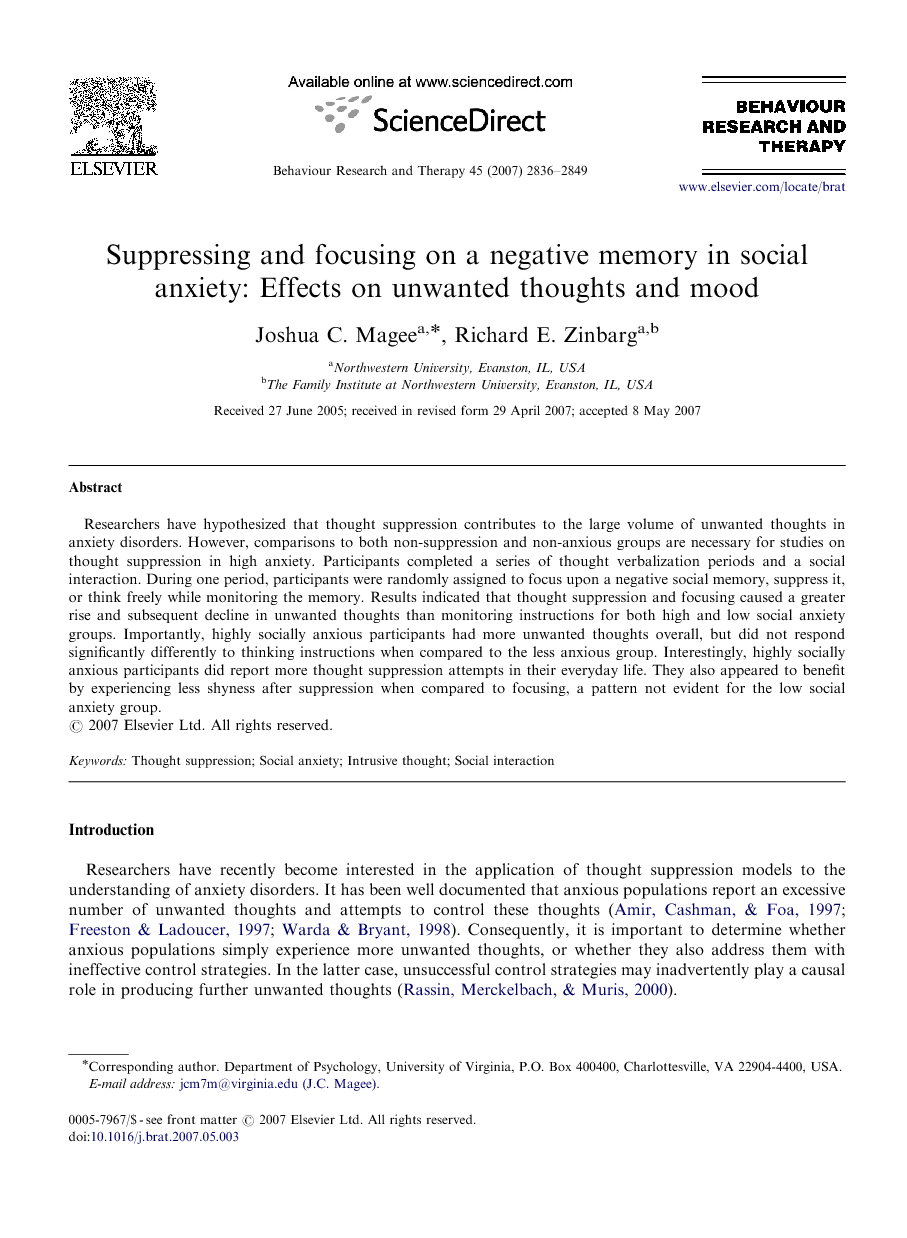 Researchers have hypothesized that thought suppression contributes to the large volume of unwanted thoughts in anxiety disorders. However, comparisons to both non-suppression and non-anxious groups are necessary for studies on thought suppression in high anxiety. Participants completed a series of thought verbalization periods and a social interaction. During one period, participants were randomly assigned to focus upon a negative social memory, suppress it, or think freely while monitoring the memory. Results indicated that thought suppression and focusing caused a greater rise and subsequent decline in unwanted thoughts than monitoring instructions for both high and low social anxiety groups. Importantly, highly socially anxious participants had more unwanted thoughts overall, but did not respond significantly differently to thinking instructions when compared to the less anxious group. Interestingly, highly socially anxious participants did report more thought suppression attempts in their everyday life. They also appeared to benefit by experiencing less shyness after suppression when compared to focusing, a pattern not evident for the low social anxiety group.

Researchers have recently become interested in the application of thought suppression models to the understanding of anxiety disorders. It has been well documented that anxious populations report an excessive number of unwanted thoughts and attempts to control these thoughts (Amir, Cashman, & Foa, 1997; Freeston & Ladoucer, 1997; Warda & Bryant, 1998). Consequently, it is important to determine whether anxious populations simply experience more unwanted thoughts, or whether they also address them with ineffective control strategies. In the latter case, unsuccessful control strategies may inadvertently play a causal role in producing further unwanted thoughts (Rassin, Merckelbach, & Muris, 2000). Thought suppression is one control strategy that has been frequently found to be counterproductive (Wegner, Schneider, Carter, & White, 1987; Wenzlaff & Wegner, 2000). During thought suppression, it is believed that individuals engage in an effortful search for distracters while simultaneously monitoring automatically for further thought instances (Wegner, 1994). According to this theoretical account, cognitive demands during suppression serve to disable the effortful search for distracters and allow the automatic monitoring process to enhance the accessibility of the thought. This enhancement of unwanted thoughts during suppression is known as an “initial enhancement” effect of suppression. An alternative method by which studies have identified ironic effects of suppression is by examining whether enhancement occurs in thought periods after the suppression period. In this case, the effortful search process ends, while the residual accessibility from the automatic monitoring process leads to an enhancement in thoughts. This enhancement is termed as “rebound effect” because unwanted thoughts rebound once a person no longer attempts to suppress them. Studies have supported both of these ideas, as researchers have found that persons attempting to suppress target thoughts often ironically end up thinking more about those thoughts when simultaneously encountering other cognitive demands (Wegner & Zanakos, 1994; for a review, see Wenzlaff & Wegner, 2000). Additionally, there seems to be a small to moderate rebound effect across studies (Abramowitz, Tolin, & Street, 2001).