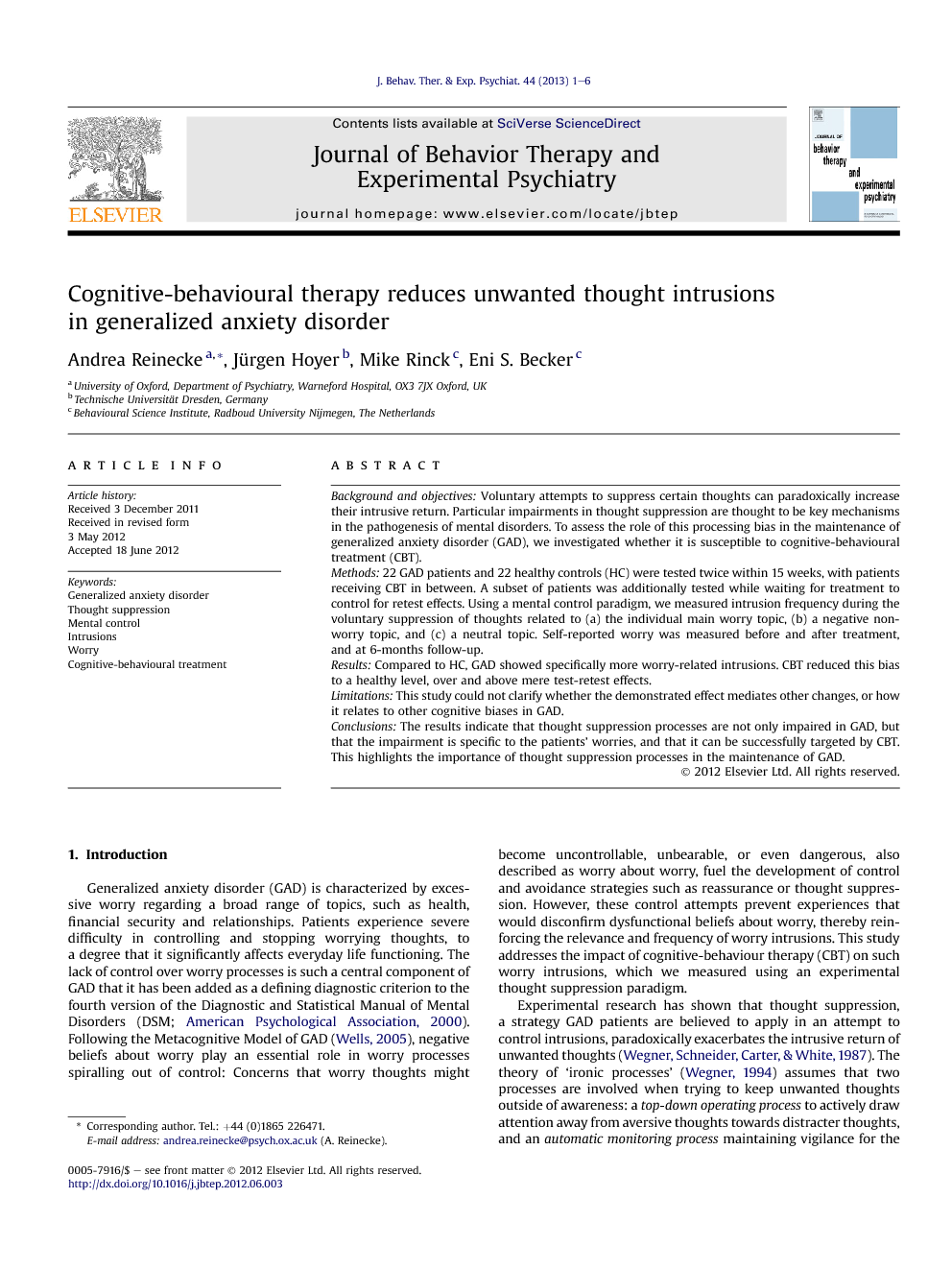 Background and objectives Voluntary attempts to suppress certain thoughts can paradoxically increase their intrusive return. Particular impairments in thought suppression are thought to be key mechanisms in the pathogenesis of mental disorders. To assess the role of this processing bias in the maintenance of generalized anxiety disorder (GAD), we investigated whether it is susceptible to cognitive-behavioural treatment (CBT). Methods 22 GAD patients and 22 healthy controls (HC) were tested twice within 15 weeks, with patients receiving CBT in between. A subset of patients was additionally tested while waiting for treatment to control for retest effects. Using a mental control paradigm, we measured intrusion frequency during the voluntary suppression of thoughts related to (a) the individual main worry topic, (b) a negative non-worry topic, and (c) a neutral topic. Self-reported worry was measured before and after treatment, and at 6-months follow-up. Results Compared to HC, GAD showed specifically more worry-related intrusions. CBT reduced this bias to a healthy level, over and above mere test-retest effects. Limitations This study could not clarify whether the demonstrated effect mediates other changes, or how it relates to other cognitive biases in GAD. Conclusions The results indicate that thought suppression processes are not only impaired in GAD, but that the impairment is specific to the patients' worries, and that it can be successfully targeted by CBT. This highlights the importance of thought suppression processes in the maintenance of GAD.

Generalized anxiety disorder (GAD) is characterized by excessive worry regarding a broad range of topics, such as health, financial security and relationships. Patients experience severe difficulty in controlling and stopping worrying thoughts, to a degree that it significantly affects everyday life functioning. The lack of control over worry processes is such a central component of GAD that it has been added as a defining diagnostic criterion to the fourth version of the Diagnostic and Statistical Manual of Mental Disorders (DSM; American Psychological Association, 2000). Following the Metacognitive Model of GAD (Wells, 2005), negative beliefs about worry play an essential role in worry processes spiralling out of control: Concerns that worry thoughts might become uncontrollable, unbearable, or even dangerous, also described as worry about worry, fuel the development of control and avoidance strategies such as reassurance or thought suppression. However, these control attempts prevent experiences that would disconfirm dysfunctional beliefs about worry, thereby reinforcing the relevance and frequency of worry intrusions. This study addresses the impact of cognitive-behaviour therapy (CBT) on such worry intrusions, which we measured using an experimental thought suppression paradigm. Experimental research has shown that thought suppression, a strategy GAD patients are believed to apply in an attempt to control intrusions, paradoxically exacerbates the intrusive return of unwanted thoughts (Wegner, Schneider, Carter, & White, 1987). The theory of ‘ironic processes’ (Wegner, 1994) assumes that two processes are involved when trying to keep unwanted thoughts outside of awareness: a top-down operating process to actively draw attention away from aversive thoughts towards distracter thoughts, and an automatic monitoring process maintaining vigilance for the re-appearance of an aversive thought to initiate the allocation of further operating process resources if required. Ironically, sustained vigilance for aversive thoughts comes with a lowered detection threshold for the appearance of such stimuli, making the rebound of intrusive thoughts more likely ( Wegner, 1994). Thought suppression experiments have been shown to be very effective tools in studying such intrusion amplification processes (assumed to play a role in GAD patients) in healthy individuals. Participants are instructed not to think of a certain image or thought, for instance a white bear, for a few minutes ( Wegner et al., 1987). A broad range of studies in non-clinical samples has demonstrated two interesting phenomena: Participants seem to show a) an enhancement effect, reflected in an increased occurrence of thoughts they are instructed to suppress, and b) a rebound effect, implying increased occurrence of the suppressed thought following the suppression period (e.g., Rassin, 2005; Salkovskis & Campbell, 1994; Wenzlaff & Wegner, 2000). Other studies have confirmed that suppression paradoxically leads to increased vigilance for the suppressed thoughts, reflected in stronger interference effects for these words in a colour-naming Stroop task ( Klein, 2007; Page, Locke, & Trio, 2005). Translated to clinical populations, this paradigm provides an ideal opportunity to experimentally capture the experience of impairments in voluntary control over aversive thoughts in patients with disorders such as GAD. Although only very few clinical studies exist to date, there is convincing evidence that both during unrestricted thinking-aloud as well as during voluntary, instructed thought suppression, treatment-seeking GAD patients have particular difficulty in successfully inhibiting worry-related thoughts compared to healthy controls (Becker, Rinck, Roth, & Margraf, 1998). Such results support the assumption that impairment in these processes might be a key mechanism in the development and maintenance of psychopathology (Najmi & Wegner, 2009; Wegner, 1989). However, it remains open whether impairments in thought control are malleable, and therefore susceptible to treatment. CBT approaches are recommended as first-line interventions in GAD (National Institute for Health and Clinical Excellence, 2007). The experience of habituation to fear stimuli during repeated exposure or relaxation (e.g., Borkovec, Alcaine, & Behar, 2004; Öst, 1987) has been shown to be effective in reducing anxiety, somatic symptoms, and worry (e.g., Borkovec, Newman, Pincus, & Lytle, 2002; Hoyer et al., 2009; Mitte, 2005). Moreover, CBT in GAD has been proven effective in reducing attentional bias to threat (Mathews, Mogg, Kentish, & Eysenck, 1995) and implicit threat generalisation (Reinecke, Rinck, Becker, & Hoyer, submitted for publication). However, to date no research has addressed whether CBT has an impact on the frequency of unwanted worry intrusions that occur during thought suppression in GAD (Becker et al., 1998), leaving open to what degree this bias is in fact linked to the pathogenesis of the disorder. In this article, we present a study investigating whether the recently reported increased frequency of worry intrusions in GAD patients is susceptible to CBT treatment. In addition, we add to earlier studies by investigating whether the effect of increased intrusion frequency is specific to worry-related material, or whether it generalizes to other negative thoughts. A group of GAD patients was tested with the white-bear paradigm before and after treatment and compared to a group of healthy controls. In three experimental blocks, participants indicated the involuntary occurrence of a specific neutral thought, negative worry thought, or negative non-worry thought that they were instructed to suppress. In addition, a patient waiting group was tested twice before treatment to be able to distinguish treatment effects from mere retest effects. We hypothesized that i) before treatment, GAD patients and healthy controls would show no differences in intrusion frequency concerning negative non-worry and neutral topics, but that patients would show increased intrusions of worry-related thoughts, and ii) that these increased worry intrusions in GAD patients would normalize following treatment, over and above mere retest effects.