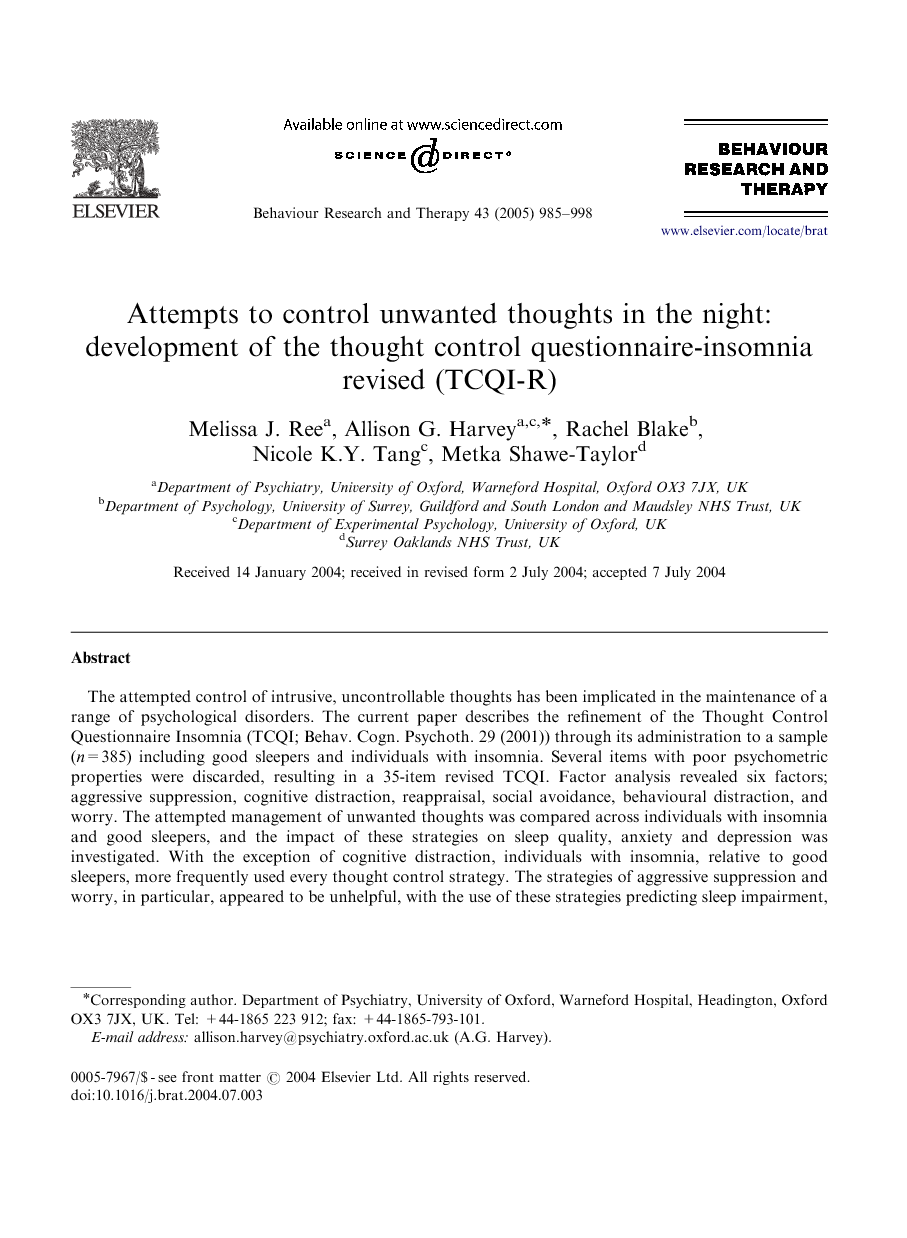 The attempted control of intrusive, uncontrollable thoughts has been implicated in the maintenance of a range of psychological disorders. The current paper describes the refinement of the Thought Control Questionnaire Insomnia (TCQI; Behav. Cogn. Psychoth. 29 (2001)) through its administration to a sample (n=385) including good sleepers and individuals with insomnia. Several items with poor psychometric properties were discarded, resulting in a 35-item revised TCQI. Factor analysis revealed six factors; aggressive suppression, cognitive distraction, reappraisal, social avoidance, behavioural distraction, and worry. The attempted management of unwanted thoughts was compared across individuals with insomnia and good sleepers, and the impact of these strategies on sleep quality, anxiety and depression was investigated. With the exception of cognitive distraction, individuals with insomnia, relative to good sleepers, more frequently used every thought control strategy. The strategies of aggressive suppression and worry, in particular, appeared to be unhelpful, with the use of these strategies predicting sleep impairment, anxiety and depression. The strategy of cognitive distraction appeared to be helpful, with the use of this strategy predicting better sleep quality.

The attempted control of intrusive, uncontrollable thoughts has been identified as an important feature in a range of psychological disorders including obsessive compulsive disorder, post traumatic stress disorder, social phobia, insomnia, and depression (e.g., Abramowitz, Whiteside, Kalsy, & Tolin, 2003; Harvey, 2002a; Harvey & Bryant, 1998; Reynolds & Wells, 1999). A body of research is emerging to endorse the proposal that some thought control strategies are helpful but that others are unhelpful because they actually perpetuate unwanted thoughts rather than put an end to them (e.g., Abramowitz et al., 2003; Amir, Cashman, & Foa, 1997; Harvey, 2001; Salkovskis & Campbell, 1994). In order to aid the systematic investigation of strategies used in an attempt to control unwanted thoughts, Wells and Davies (1994) developed the Thought Control Questionnaire (TCQ) which asks respondents to indicate the frequency with which they employ each of thirty different thought control strategies. The development of the TCQ led to the identification of five dimensions of thought control; namely, punishment, worry, distraction, social control, and reappraisal. A factor analysis of a preliminary version of the TCQ suggested that it contained six factors (including two distraction factors: cognitive distraction and behavioural distraction), while a subsequent analysis revealed only five factors because the distraction factors collapsed into one (Wells & Davies, 1994). Interestingly, in a subsequent investigation of the psychometric properties of the TCQ in a clinical sample (Reynolds & Wells, 1999), support for the distraction scale being split into behavioural and cognitive dimensions was once again obtained. Research employing the TCQ to date has revealed an acceptably robust factor structure, but whether the distraction scale comprises one or two factors is unclear. Since the development of the TCQ, research has been broadly consistent in suggesting that certain thought control strategies are associated with psychopathology. Strategies of punishment (e.g., ‘I punish myself for having the thought’) and worry (e.g., ‘I focus on different negative thoughts’) have been identified to be associated with more severe symptoms across a number of psychological disorders (e.g., Amir et al., 1997; Andrews, Troop, Joseph, Hiskey, & Coyne, 2002; Reynolds & Wells, 1999). Conversely, the strategy of social control (e.g., ‘I ask my friends if they have similar thoughts’) may be an adaptive strategy that may provide a protective buffer against psychological distress (Blake, Shawe-Taylor, & Murray, 2003; Harvey, 2001; Wells & Davies, 1994). The TCQ, then, has proved to be a useful assessment tool in the investigation of thought control strategies across a range of disorders. It can be concluded that thought control is a multifaceted construct, with some thought control strategies being unhelpful and others being more effective in the management of unwanted thoughts and images. A ‘racing mind’ while lying in bed is as a key symptom of insomnia (e.g., Espie, 1991; Harvey, 2000; Lichstein & Rosenthal, 1980) and hence difficulty with thought control has been implicated in the maintenance of insomnia and potentially its treatment (e.g., Harvey, 2002a, Harvey, in press). Accordingly, Harvey (2001) developed an adaptation of the TCQ specifically for use in insomnia (see method section for a description of this measure). Employing the TCQI the frequency with which thoughts interfered with sleep was associated with the strategies of suppression, punishment, reappraisal, and worry (Harvey, 2001). The data also revealed that individuals with insomnia used the thought control strategies of suppression, reappraisal, and worry more frequently than good-sleeper controls. Social control and replacement strategies, however, were associated with better sleep. While the data produced by the TCQI is promising, its psychometric properties need to be investigated. Accordingly, the primary aim of the current study was to assess the psychometric properties of the TCQI and revise it as necessary in order to enhance its psychometric properties. A secondary aim was to replicate and extend Harvey (2001) results by investigating thought control strategies employed by good sleepers and patients with insomnia with a larger sample of participants than employed by Harvey (2001); n=60n=60, and to examine the relationship between thought control strategies and measures of insomnia severity, anxiety, and depression.