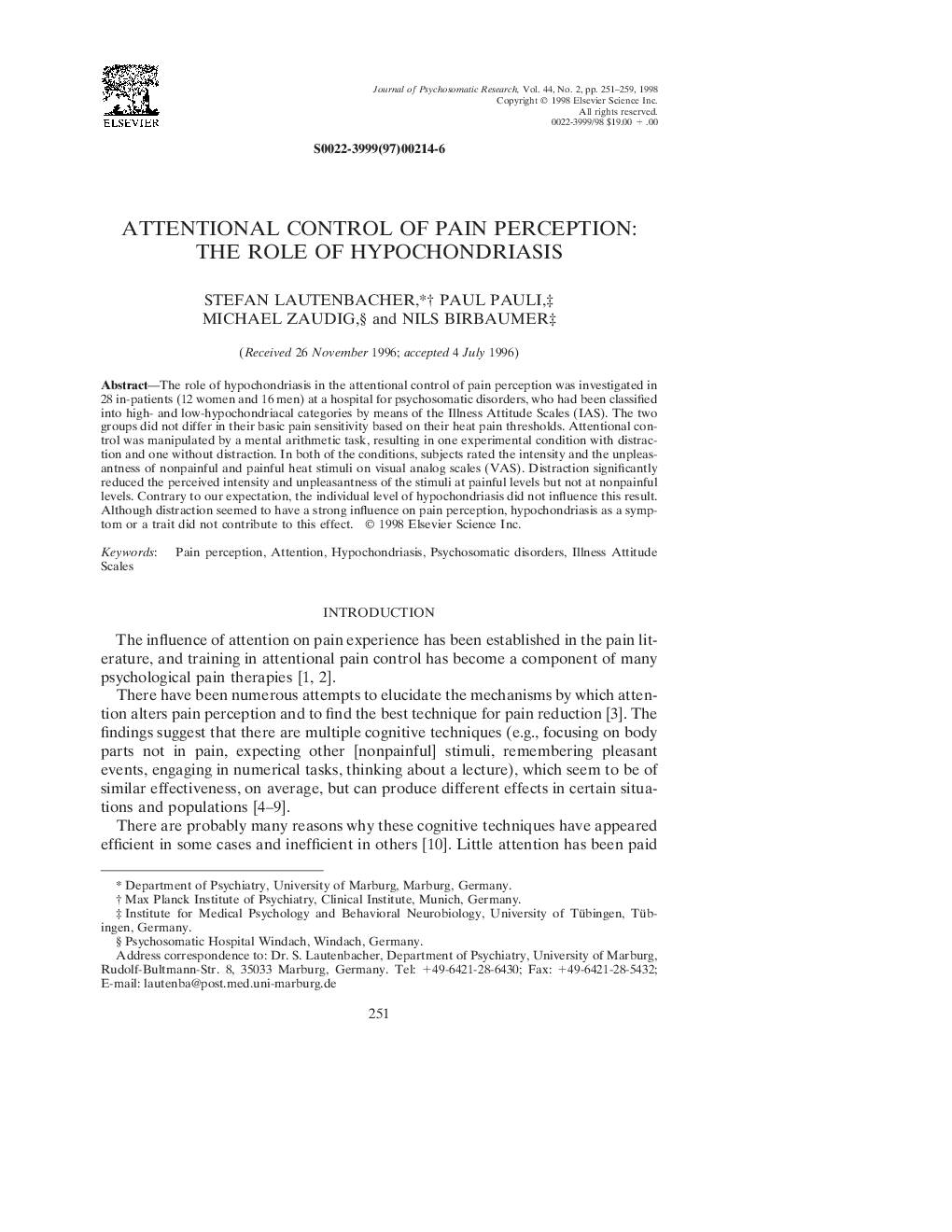 Abstract The role of hypochondriasis in the attentional control of pain perception was investigated in 28 in-patients (12 women and 16 men) at a hospital for psychosomatic disorders, who had been classified into high- and low-hypochondriacal categories by means of the Illness Attitude Scales (IAS). The two groups did not differ in their basic pain sensitivity based on their heat pain thresholds. Attentional control was manipulated by a mental arithmetic task, resulting in one experimental condition with distraction and one without distraction. In both of the conditions, subjects rated the intensity and the unpleasantness of nonpainful and painful heat stimuli on visual analog scales (VAS). Distraction significantly reduced the perceived intensity and unpleasantness of the stimuli at painful levels but not at nonpainful levels. Contrary to our expectation, the individual level of hypochondriasis did not influence this result. Although distraction seemed to have a strong influence on pain perception, hypochondriasis as a symptom or a trait did not contribute to this effect.

1. Introduction The influence of attention on pain experience has been established in the pain literature, and training in attentional pain control has become a component of many psychological pain therapies 1 and 2. There have been numerous attempts to elucidate the mechanisms by which attention alters pain perception and to find the best technique for pain reduction [3]. The findings suggest that there are multiple cognitive techniques (e.g., focusing on body parts not in pain, expecting other [nonpainful] stimuli, remembering pleasant events, engaging in numerical tasks, thinking about a lecture), which seem to be of similar effectiveness, on average, but can produce different effects in certain situations and populations 4, 5, 6, 7, 8 and 9. There are probably many reasons why these cognitive techniques have appeared efficient in some cases and inefficient in others [10]. Little attention has been paid to individual differences, although they have been demonstrated to be important factors in other forms of psychological pain control (e.g., in hypnosis [11]). Therefore, McCaul and Malott [3]encouraged research on individual differences in attentional pain control. A psychological condition that appears relevant in this context is hypochondriasis, because one of its main characteristics is a heightened awareness and preoccupation with bodily symptoms 12 and 13. If this characteristic is considered a stable perceptual habit, it seems likely that attempts by hypochondriacs to displace pain from consciousness by attentional strategies fail. Consequently, hypochondriacal individuals should rarely be successful in attentional control of pain perception. Experimental attempts to verify this assumption have been infrequent and only partially successful. Individuals low and high in “private body consciousness,” a perceptual orientation toward somatic events and processes, did not differ in their ability to reduce pain responsiveness or to alter pain experience by various attentional strategies 14 and 15. Furthermore, high-hypochondriacal individuals did not appear to be more attentionally absorbed by the anticipation of pain than low-hypochondriacal subjects. Instead, the former performed worse on a distraction task than the latter, no matter whether pain was anticipated or not [16]. One reason for these equivocal findings may be related to the use of subjects with nonclinical levels of hypochondriasis in these studies. Significant levels of bodily preoccupation in hypochondriasis are more often seen in clinical cases involving psychiatric and psychosomatic patients. Because strong attentional absorption by pain and an inability to control it by distraction may be more likely to arise among these patients, a group of psychosomatic patients was scheduled for investigation. Hypochondriacal symptoms are very common among these patients although the full syndrome is infrequent even in these cases. Other reasons for the disappointing results in earlier studies might be an actual lack of association between hypochondriasis and attentional pain control or a very complex relationship between the two variables. It seems reasonable to assume that an individual suffering from heightened awareness and preoccupation with bodily symptoms cannot be distracted from pain. However, hypochondriacal and nonhypochondriacal individuals might differ in another way in the mode of processing of potentially aversive signals, such as pain stimuli. It is generally accepted that there are tasks that require controlled attention (serial processing), which take much attentional capacity, and others that require only automatic attention (parallel processing), which take little attentional capacity [17]. With respect to bodily discomfort like pain, it is appealing to assume that hypochondriacs use the controlled (serial) mode and spend much of their attentional capacity in processing pain whereas nonhypochondriacs rely upon the automatic (parallel) mode. If this is the case, distraction, which diverts attentional capacity to the processing of “irrelevant” stimuli, might be highly effective in influencing (possibly even reducing) pain perception in hypochondriacs but not in nonhypochondriacs. To test these two theoretical alternatives, the perception of nonpainful and painful contact heat stimuli was investigated in low- and high-hypochondriacal subjects under conditions of distraction and of no distraction. To control for a priori differences in pain sensitivity, heat pain thresholds were assessed in the groups of subjects before the experimental manipulations.