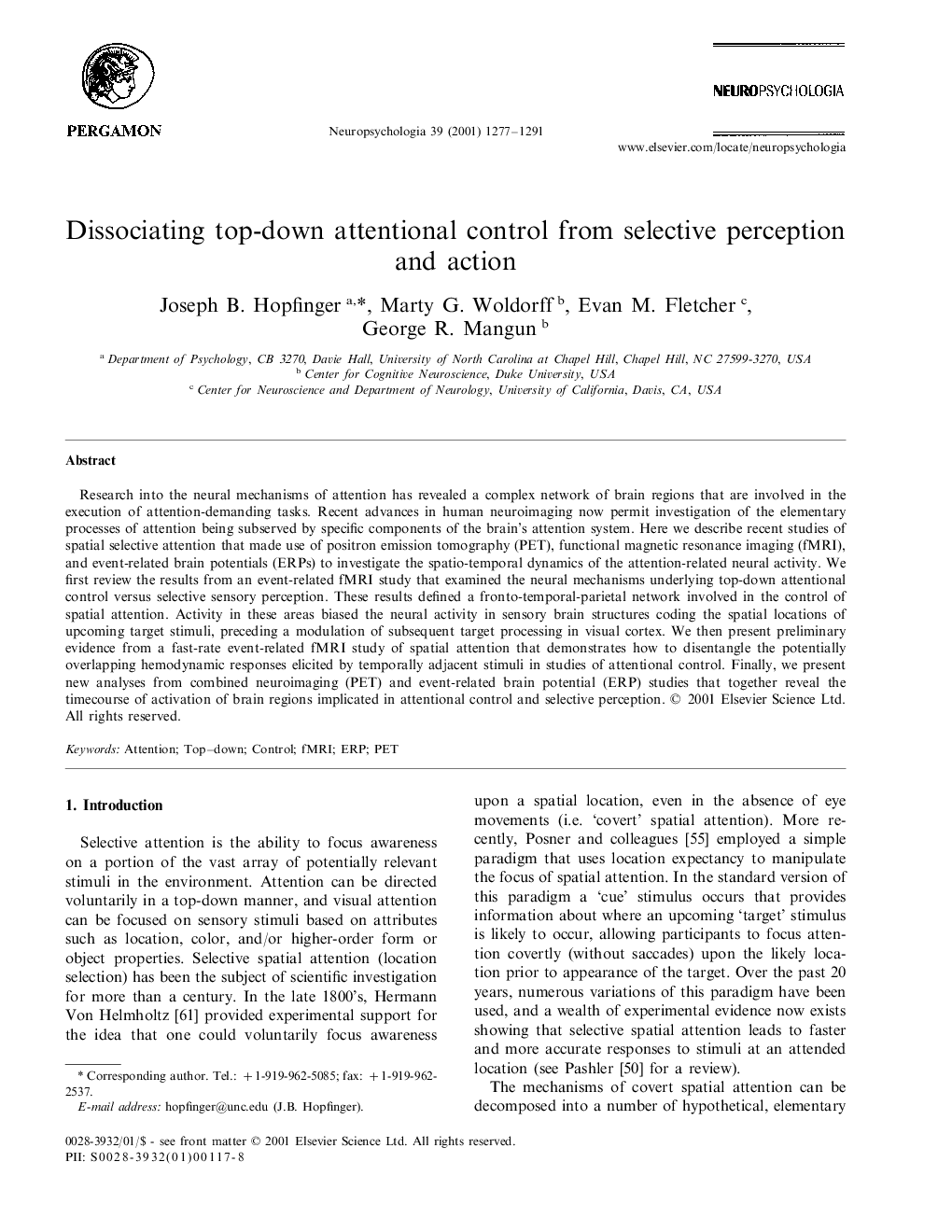 Abstract Research into the neural mechanisms of attention has revealed a complex network of brain regions that are involved in the execution of attention-demanding tasks. Recent advances in human neuroimaging now permit investigation of the elementary processes of attention being subserved by specific components of the brain's attention system. Here we describe recent studies of spatial selective attention that made use of positron emission tomography (PET), functional magnetic resonance imaging (fMRI), and event-related brain potentials (ERPs) to investigate the spatio-temporal dynamics of the attention-related neural activity. We first review the results from an event-related fMRI study that examined the neural mechanisms underlying top-down attentional control versus selective sensory perception. These results defined a fronto-temporal-parietal network involved in the control of spatial attention. Activity in these areas biased the neural activity in sensory brain structures coding the spatial locations of upcoming target stimuli, preceding a modulation of subsequent target processing in visual cortex. We then present preliminary evidence from a fast-rate event-related fMRI study of spatial attention that demonstrates how to disentangle the potentially overlapping hemodynamic responses elicited by temporally adjacent stimuli in studies of attentional control. Finally, we present new analyses from combined neuroimaging (PET) and event-related brain potential (ERP) studies that together reveal the timecourse of activation of brain regions implicated in attentional control and selective perception.

. Introduction Selective attention is the ability to focus awareness on a portion of the vast array of potentially relevant stimuli in the environment. Attention can be directed voluntarily in a top-down manner, and visual attention can be focused on sensory stimuli based on attributes such as location, color, and/or higher-order form or object properties. Selective spatial attention (location selection) has been the subject of scientific investigation for more than a century. In the late 1800's, Hermann Von Helmholtz [61] provided experimental support for the idea that one could voluntarily focus awareness upon a spatial location, even in the absence of eye movements (i.e. ‘covert’ spatial attention). More recently, Posner and colleagues [55] employed a simple paradigm that uses location expectancy to manipulate the focus of spatial attention. In the standard version of this paradigm a ‘cue’ stimulus occurs that provides information about where an upcoming ‘target’ stimulus is likely to occur, allowing participants to focus attention covertly (without saccades) upon the likely location prior to appearance of the target. Over the past 20 years, numerous variations of this paradigm have been used, and a wealth of experimental evidence now exists showing that selective spatial attention leads to faster and more accurate responses to stimuli at an attended location (see Pashler [50] for a review). The mechanisms of covert spatial attention can be decomposed into a number of hypothetical, elementary mental operations. These may include but need not be limited to: disengaging attention from its current locus, moving attention to the desired location, selectively modulating the processing of new sensory inputs, and executing motor actions to target events [50] and [54]. Numerous studies in humans and animals have implicated a widespread set of cortical and subcortical brain regions in spatial attentional processing, leading to the view that attention is subserved by a highly specific but widely distributed attentional network [10], [24] and [47]. The challenge is now to relate activity in specific parts of this attention network to particular component operations of attention. Neuroimaging studies in humans, and lesion analysis in neurological patients and non-human primates, have shown that this spatial attention network may include the posterior parietal cortex [11], [23], [49] and [56] temporo-parietal junction [9] and [22], superior colliculus [47], thalamus [25], [36] and [52], superior temporal sulcus [7], [49] and [62], and regions of the frontal cortex [7] and [26]. While neuroimaging studies have identified the neural components of an attention-network in the healthy human brain, limitations in classical neuroimaging analysis methods have made it difficult to associate particular brain structures with specific attentional operations. Classical neuroimaging analysis methods often required tasks to be blocked over periods of many seconds or minutes. Within such block-design paradigms, top-down control and preparatory mechanisms are difficult to disentangle from the selective target processing that subsequently occurs as a result of attentional orienting. The advent of event-related methods of analysis in fMRI, however, has now enabled a more direct investigation of the neural substrates underlying the subcomponent processes of attention as for example, in the investigation of the neural mechanisms of top-down attentional control. In the next section we review recent evidence from our fMRI studies investigating the control circuitry of voluntary spatial attention.

4. Conclusions The advent of new analysis methods for brain imaging has ushered in an exciting time for the study of the neural mechanisms of selective attention. Hypothesized elementary operations contributing to attentive behaviors can now start to be linked to distinct underlying brain circuitry. Our event-related fMRI studies have begun to dissociate some of the circuitry involved in attentional control from the brain processing involved in subsequent attentional modulation of stimulus processing. Regions in the intraparietal sulcus, superior temporal sulcus, and dorsal frontal cortex were implicated in an attentional control circuit that may bias activity in the visual processing regions of cortex representing attended regions of space, prior to the appearance of the target stimuli. The fast-rate event-related fMRI study [63] extends these findings within a paradigm that more closely resembles those used previously in behavioral and ERP studies. This should permit more direct links to be made between cognitive models of attention and neurobiological mechanisms. Despite these advances, however, functional imaging remains unavoidably limited in temporal precision. By integrating functional imaging with ERP recording, we have shown how a more precise timing of neuroimaging-defined brain activity can be approached. For example, activation within a region of the mid-cingulate/ SMA was associated with scalp-recorded neural activity at a specific latency (∼100 msec) after target presentation. Additionally, attention effects in multiple extrastriate areas were attributed to processing at distinct latencies using dipole modeling of ERP activity in realistic head models. Future studies using this integrative approach to address preparatory mechanisms of attention should provide further evidence about how top-down cognitive mechanisms modulate visual perception.