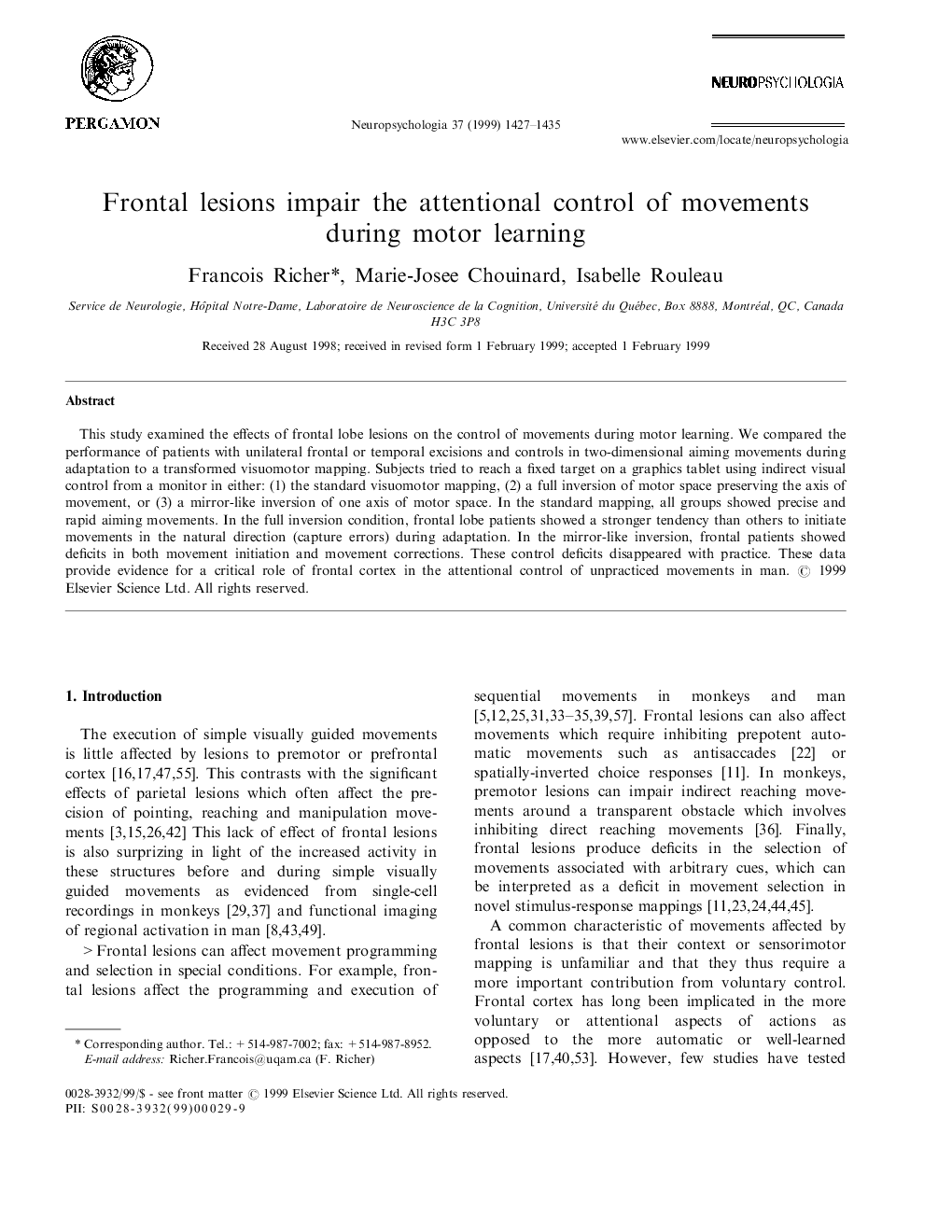 Abstract This study examined the effects of frontal lobe lesions on the control of movements during motor learning. We compared the performance of patients with unilateral frontal or temporal excisions and controls in two-dimensional aiming movements during adaptation to a transformed visuomotor mapping. Subjects tried to reach a fixed target on a graphics tablet using indirect visual control from a monitor in either: (1) the standard visuomotor mapping, (2) a full inversion of motor space preserving the axis of movement, or (3) a mirror-like inversion of one axis of motor space. In the standard mapping, all groups showed precise and rapid aiming movements. In the full inversion condition, frontal lobe patients showed a stronger tendency than others to initiate movements in the natural direction (capture errors) during adaptation. In the mirror-like inversion, frontal patients showed deficits in both movement initiation and movement corrections. These control deficits disappeared with practice. These data provide evidence for a critical role of frontal cortex in the attentional control of unpracticed movements in man.

Introduction The execution of simple visually guided movements is little affected by lesions to premotor or prefrontal cortex [16], [17], [47] and [55]. This contrasts with the significant effects of parietal lesions which often affect the precision of pointing, reaching and manipulation movements [3], [15], [26] and [42] This lack of effect of frontal lesions is also surprizing in light of the increased activity in these structures before and during simple visually guided movements as evidenced from single-cell recordings in monkeys [29] and [37] and functional imaging of regional activation in man [8], [43] and [49]. Frontal lesions can affect movement programming and selection in special conditions. For example, frontal lesions affect the programming and execution of sequential movements in monkeys and man [5], [12], [25], [31], [33], [34], [35], [39] and [57]. Frontal lesions can also affect movements which require inhibiting prepotent automatic movements such as antisaccades [22] or spatially-inverted choice responses [11]. In monkeys, premotor lesions can impair indirect reaching movements around a transparent obstacle which involves inhibiting direct reaching movements [36]. Finally, frontal lesions produce deficits in the selection of movements associated with arbitrary cues, which can be interpreted as a deficit in movement selection in novel stimulus-response mappings [11], [23], [24], [44] and [45]. A common characteristic of movements affected by frontal lesions is that their context or sensorimotor mapping is unfamiliar and that they thus require a more important contribution from voluntary control. Frontal cortex has long been implicated in the more voluntary or attentional aspects of actions as opposed to the more automatic or well-learned aspects [17], [40] and [53]. However, few studies have tested this dissociation directly in visually-guided movements by comparing the performance of unpracticed and practiced movements. In novel unpracticed situations, performance depends a great deal on attentional control, while after acquisition attentional control is much less necessary as well-learned programs take over control of many portions of movements [28], [46], [51] and [56]. One reason that frontal lesions produce so few problems in visually guided movements may be that most of these movements are well practiced. This study examined whether frontal lesions affect unpracticed movements during motor learning in man. Some evidence points to a role of frontal cortex in unpracticed movements. For example, cerebral activation in man appears to increase in frontal areas during the acquisition of motor skills [14], [19], [20], [21], [32], [41], [50] and [52]. If frontal cortex activity is necessary for the attentional control of movements, frontal lesions should impair unpracticed movements in a motor learning situation. Unpracticed movements can be observed during adaptation to new sensorimotor mappings and some studies have examined sensorimotor adaptation after frontal cortical damage. Movements during prism adaptation have shown mixed results, some showing no effects of frontal lesions [58]; others showing some adaptation deficits after frontal lesions but few initial performance problems [6]. Depending on the procedure used, prism adaptation may involve adaptation of several motor modalities including eye, head and or arm movements at different moments in the task and may therefore be too complex to directly address the question of attentional motor control problems. Some studies have examined mirror-reversed movements. Some case studies have shown adaptation problems after frontal lesions and some have not [1], [4] and [10]. We recently examined mirror tracing performance in patients with frontal excisions [7]. In this situation, frontal lobe patients were slower than temporal lobe patients as expected but also showed more frequent oscillatory movements, suggesting an impaired visuomotor control. However, mirror tracing provides a very coarse measure of sensorimotor control. The present study was designed to provide a more direct test of the effect of human frontal damage on inverted movements. We compared the performance of patients with unilateral frontal lobe lesions to that of patients with temporal lobe lesions on simple visually guided aiming movements during adaptation to a transformed visuomotor mapping. If frontal lesions affect attentional motor control, patients with frontal lesions should show problems in inverted movements during adaptation but not after learning when the newly formed programs can take over control of the performance.