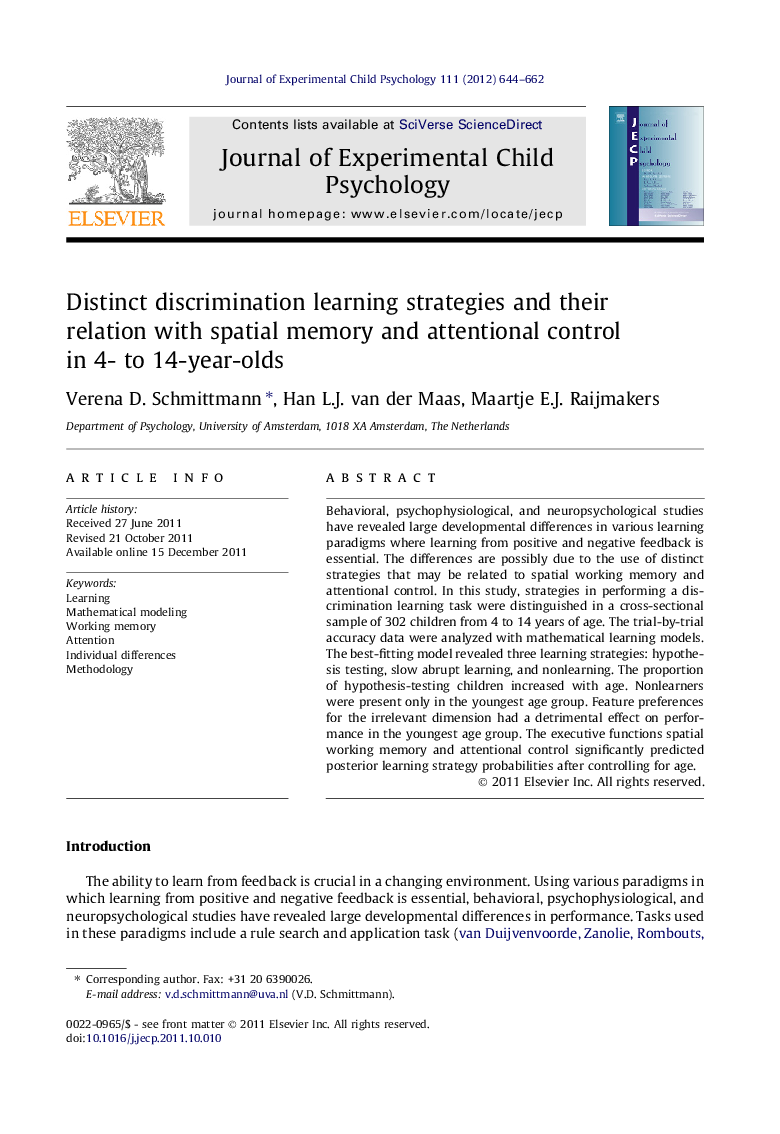 Abstract Behavioral, psychophysiological, and neuropsychological studies have revealed large developmental differences in various learning paradigms where learning from positive and negative feedback is essential. The differences are possibly due to the use of distinct strategies that may be related to spatial working memory and attentional control. In this study, strategies in performing a discrimination learning task were distinguished in a cross-sectional sample of 302 children from 4 to 14 years of age. The trial-by-trial accuracy data were analyzed with mathematical learning models. The best-fitting model revealed three learning strategies: hypothesis testing, slow abrupt learning, and nonlearning. The proportion of hypothesis-testing children increased with age. Nonlearners were present only in the youngest age group. Feature preferences for the irrelevant dimension had a detrimental effect on performance in the youngest age group. The executive functions spatial working memory and attentional control significantly predicted posterior learning strategy probabilities after controlling for age.

Conclusion To our knowledge, this is the first study to investigate the role of the executive functions working memory and attentional control in different latent strategies of learning a simple discrimination of an unpreferred dimension. The current findings are consistent with the results of previous studies that revealed multiple learning modes in discrimination learning. A model with the three latent groups of hypothesis testing, slow learning, and nonlearning provided the best and most parsimonious fit to the data. The proportion of efficiently hypothesis testing children increased with age, and nonlearners were significantly present only in the 4- and 5-year-olds. The 4- and 5-year-olds who showed a feature preference and were forced to learn a rule of their unpreferred dimension appeared to be unable to engage in an efficient hypothesis testing strategy. However, a small group of the 4-and 5-year-olds who did not show a feature preference engaged in efficient hypothesis testing. Spatial working memory and attentional control significantly predicted posterior learning strategy probabilities after controlling for age.